There are so many sites related to author Jack Kerouac scattered across the United States, one could probably dedicate an entire website to it.  Here we pay a homage to a man who not only influenced a generation, but helped shape American counterculture.

This residence in the town of Lowell, Massachusetts is where Kerouac was born on March 12, 1922.  His family lived on the second floor.

A plaque can be found on the front porch of the house.

Kerouac’s family frequently relocated around Lowell.  By age four, they moved to this house, said to be Kerouac’s third home, which the author referred to as “sad Beaulieu.” Beaulieu was the name of the street and Jack’s older brother Gerard died of rheumatic fever while they lived there.

The Kerouac family relocated to Jamaica, New York (near Queens), where they lived in the upstairs unit above what was then a drugstore.  It was here that Kerouac wrote the “The Town and the City” and began crafting the initial pieces of his most famous novel, “On the Road.”

Kerouac would finish “On the Road” in New York City at 454 W 20th St, New York, NY 10011.  Nearby, at the corner of 7th Ave and W 20th St is where Sal Paradise and Dean Moriarty say their goodbyes at the end of the novel.

As is well documented, “On the Road” was not published for many years after it’s completion.  By the time it was first published in 1957, Kerouac had moved to Orlando, Florida.  It was in this home where he lived when “On the Road” became a bestseller and skyrocketed the author to instant fame.  Kerouac also began the manuscript for “The Dharma Bums” at this home.  The historic nature of the house was not known to Kerouac historians until 1996, when research for an article about the author led to the discovery.

Kerouac’s final home, where the author resided in 1969, can be found in St. Petersburg, Florida.  The house, reportedly still owned by the Kerouac family, is said to still contain the desk of the author, as well as other personal belongings.  Mostly sitting empty since the 1970s, the house is in need of renovation.  If upkeep can be successfully funded, the home has been considered to be opened up for public visitation in the future.

After Kerouac’s passing, he was relocated back to his birth town of Lowell, Massachusetts for his funeral and burial.  His grave can be found at the Edson Cemetery.  The trails around the cemetery are laid out like streets.  The author’s grave site can be found near the corner of Lincoln and 7th, six graves up and three graves in.  It is rumored that singer Bob Dylan still visits Kerouac’s grave twice a year.

Two grave stones can be found there for the iconic writer.  Here is the original.

Just past it is a larger headstone, which was added in 2014.  It features an engraving of the author’s signature, along with the words “The road is life.” 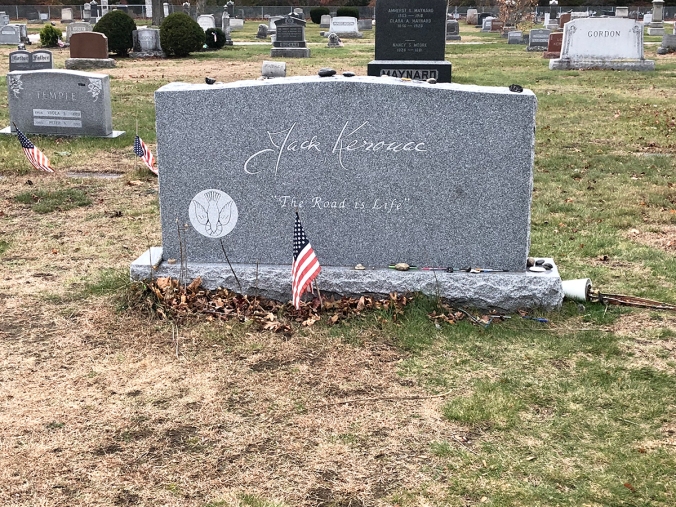 These locations only scratch the surface of all the Kerouac sites to be discovered all across the United States, but it is of course the man’s writing which stands the greatest test of time.