Quentin Tarantino’s revenge drama “Kill Bill,” was shot around California, China, Japan and Mexico.  Here we will cover locations from both volumes of the film.

The “Two Pines Wedding Chapel,” supposedly located in El Paso, Texas, is actually in the Mojave Desert in Lancaster, California.  First called the “Hi Vista Community Hall,” the building served as a community center and did not originally feature the Spanish style front facade, which is so recognizable today.  The Mission-style facade was actually added by another film production, 1981’s “True Confessions,” starring Robert De Niro and Robert Duvall.  The building also later featured in Talking Heads’ music video for “Road  To Nowhere.”  The building wasn’t widely known, however, until “Kill Bill.”  Tarantino’s production team added the wooden porch on the front and heavily remodeled the interiors.  Sometimes known as the Sanctuary Adventist Church, most people today just refer to the building as the “Kill Bill Church.”  It’s location is a bit remote, being out in the middle of the desert, but well worth a visit if you’re a fan of the film.

Earl McGraw, played by Michael Parks, arrives at the church much in the same way he does (as the same character) in the opening of “From Dusk Till Dawn,” also written by Tarantino. The two locations are, in fact, just minutes apart from each other.

The Bride’s “Death List Five” brings her to the house of Vernita Green, which is set in “The city of Pasadena, California.”  The real house is near South Pasadena, but actually located in East Los Angeles.  The house can also be seen in the 2003 “Project Greenlight” film, “The Battle Of Shaker Heights” and “Mysterious Skin.”

After waking up from a coma and escaping the hospital, The Bride makes her out into the hospital parking garage on a wheelchair, where she finds her “Pussy Wagon” truck. The real garage building is not a hospital, rather an apartment complex known as the American Cement Building, located near MacArthur Park. The bride wheels past this P2 marker, placing her on the second floor of the garage.

Here is the spot she finds the Pussy Wagon parked. It can be found by walking straight ahead from the above spot, up on the left. There is another P2 sign, which can be seen in the background behind The Bride as she spots the truck, which lines up the exact area where the vehicle was parked. The garage is open to public parking (via paid parking) on weekdays, but it is gated off for private residents only on weekends. There is also a lot of security present around the building and garage.

The Bride drives her Kawasaki bike along the streets of Tokyo, riding behind Sofie Fatale’s car down Yasukuni Dori.  It’s difficult to replicate the exact angles, as they were filmed by cameras mounted on moving vehicles in the middle of the street in a high traffic area.  The shots are also mostly quick cuts against moving backgrounds.  Here are a couple views of the general area used in the sequence.  First up is a shot looking down Yasukuni Dori at night.

Here is another view of the same street in the day, which is near Kabukicho, a red-light district of Tokyo where parts of Gaspar Noé’s “Enter The Void” were also filmed.

After a few shots in Tokyo, The Bride pulls up beside Sofie at this tunnel entrance, which is actually in Los Angeles at the Second Street Tunnel.  The tunnel is also well known for it’s use in “Blade Runner,” “The Terminator” and many more films.

Budd, played by Michael Madsen, lives in a remote trailer on a dirt road near Barstow.  At the base of these hills toward the right is where Budd’s trailer sat.  Mule Canyon Road is a popular site for off road vehicles.  While you may be able to reach it in a regular vehicle (this site is about 1 mile down from the nearest paved road), we recommend a 4×4 vehicle or at least something that doesn’t sit low to the ground, as there are many rocks and dips along the way.  Also keep in mind this area gets very hot in the summer months.

The area to the right is where Bill parks his car, with these rock formations in the background.  This is located in the same general vicinity as Budd’s trailer.

Looking back towards Calico Rd is the view where Elle Driver races down the road with a dust trail kicking up behind her.  This is also in the same general area as Budd’s trailer.

The interior of the bar where Budd works is Sam’s Hofbrau, a real topless bar, also featured in “Jackie Brown.”

After The Bride escapes being buried alive, she wonders into this roadside diner in Victorville.

Here is the exterior of the diner, although it is never seen from this angle in the film.

The 1993 Robin Williams film Mrs. Doubtfire is set around the neighborhoods of San Fransisco, California.  The house from the film can be found in the upscale Pacific Heights neighborhood.

The Seaver house from the 1980s sitcom “Growing Pains” can be found in Burbank, California, but you won’t find it in just any neighborhood.  The house is actually part of the Warner Bros. Studios lot and can be seen as part of their tour.  It can also be seen the the films “Gremlins” and “The Monster Squad.”

Dewey High in the show is John Marshall High School.  A regular location in film and television, it has also appeared in such movies as “Rebel Without A Cause,” “A Nightmare On Elm Street,” “Pretty In Pink,” “Buffy the Vampire Slayer,” “Bachelor Party,” “Grosse Pointe Blank,” “Grease” and “Raiders of the Lost Ark,” as well as such TV shows as “Boy Meets World,” “Boston Public” and many more.  It was even used in the Van Halen music video for “Hot For Teacher.”

Related articles: Just The Ten Of Us

For years, the house from “A Christmas Story,” located in Cleveland, Ohio, remained a private residence and had undergone many updates, until 2004, when a private developer purchased the home and restored it back to how it appeared in the film.  The buyer purchased with the intent of converting it into a tourist attraction.  Today, the home is available for tours and you can even book the house to stay in overnight.  The owner also purchased two properties across the street, converting one into a museum of memorabilia from the film, while the other was turned into a gift shop.

Located in the Tremont section of Cleveland’s West Side, the house has become a beacon for film lovers since it first opened to the public in 2006.  For tickets and information on visiting the house, you can find their website here. 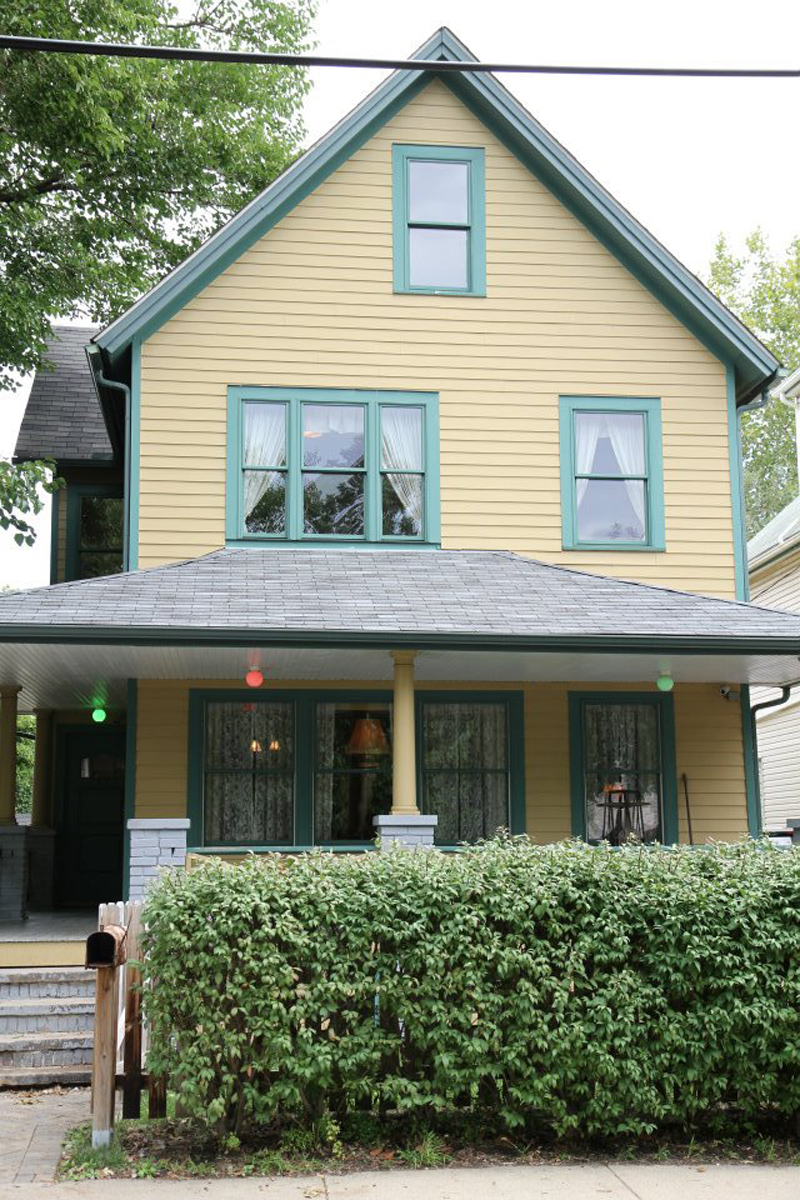 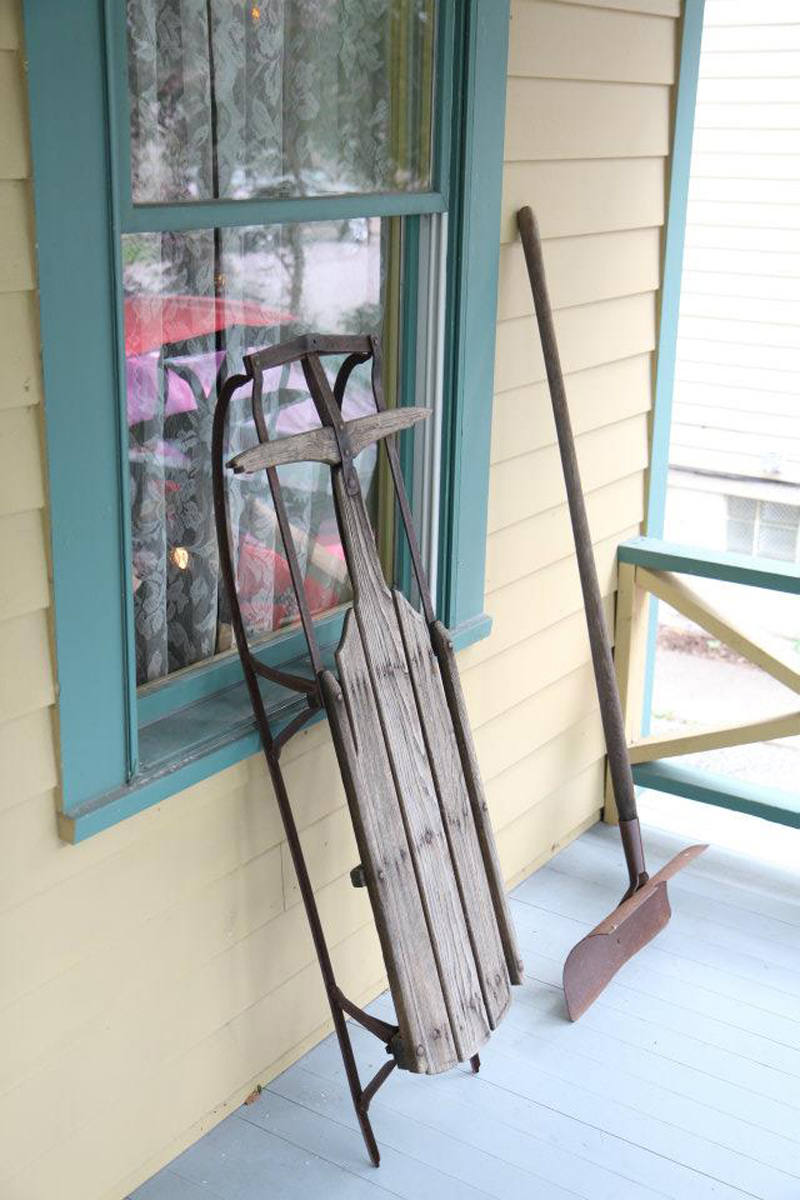 The interiors were actually shot on a sound stage in Toronto, Canada, but the owner remodeled the inside as well, to make it appear exactly as it did in the film. 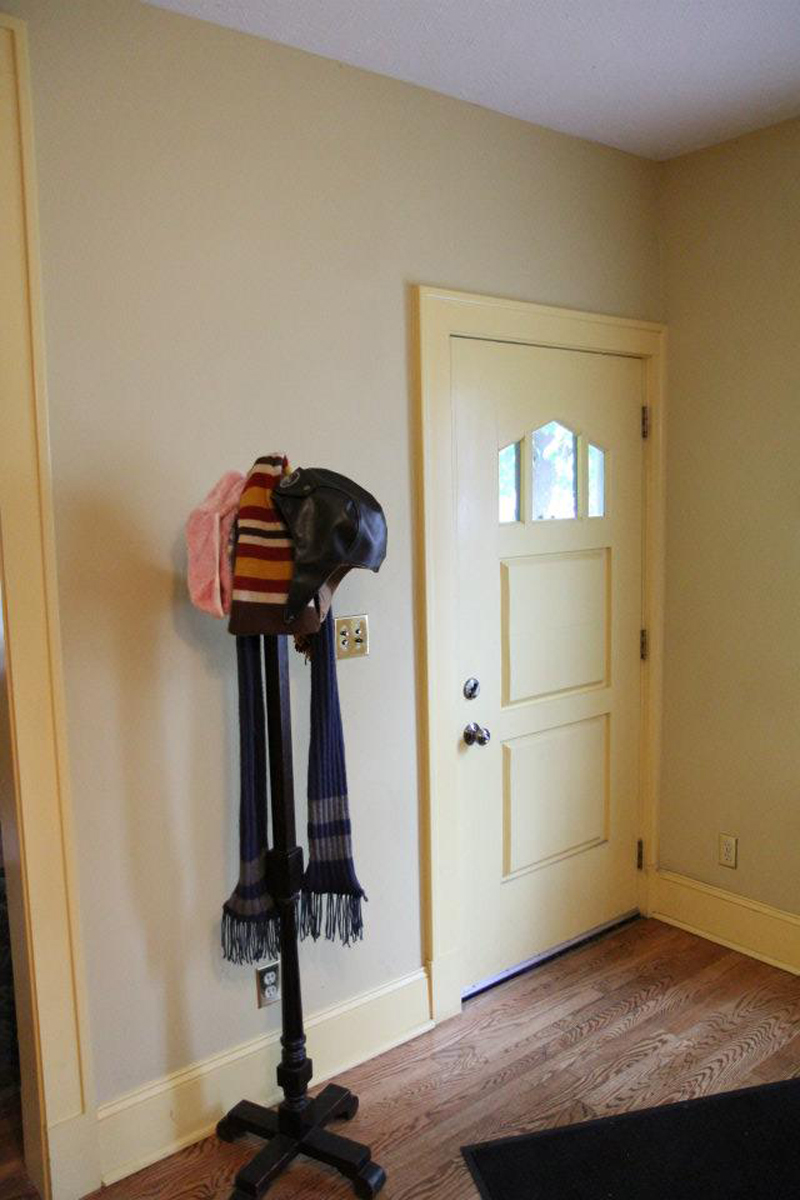 A replica of Ralphie’s father’s “major award.”  The owner of the house and museum actually runs a business selling these replica lamps, which is how he came up with the capital to invest in purchasing the properties when they went on the market. 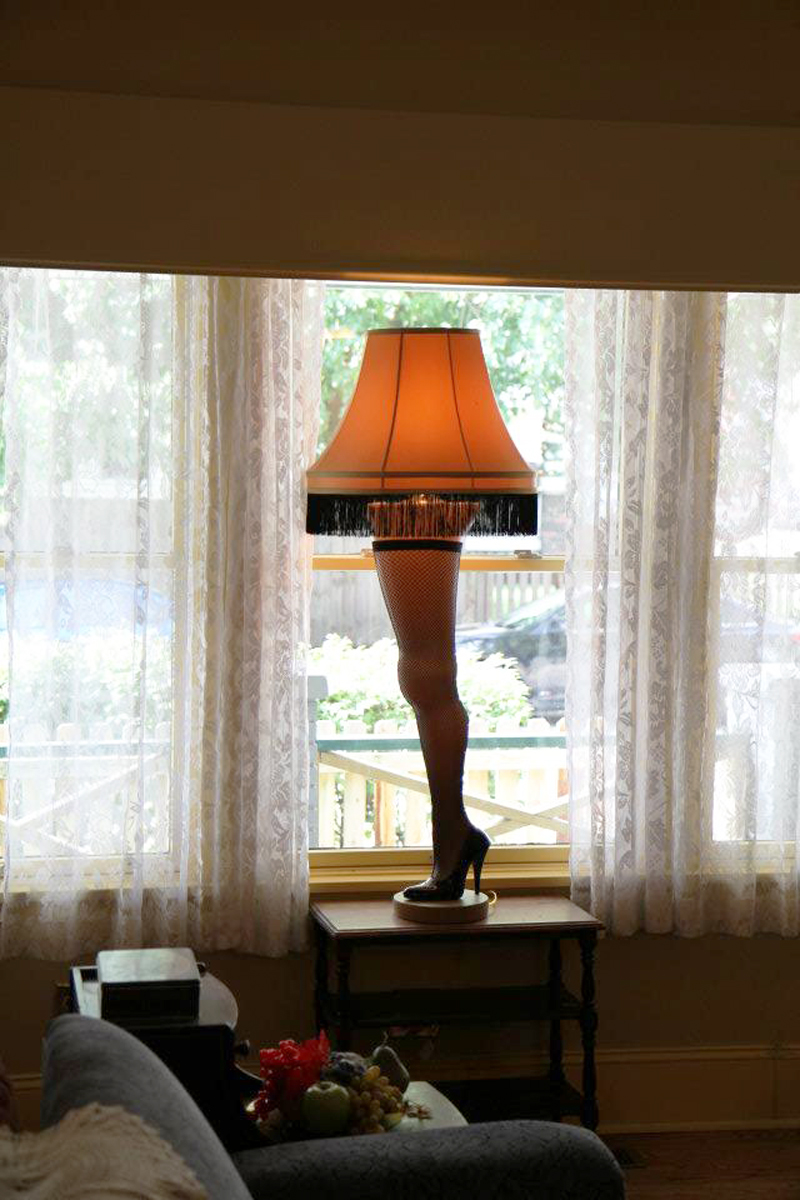 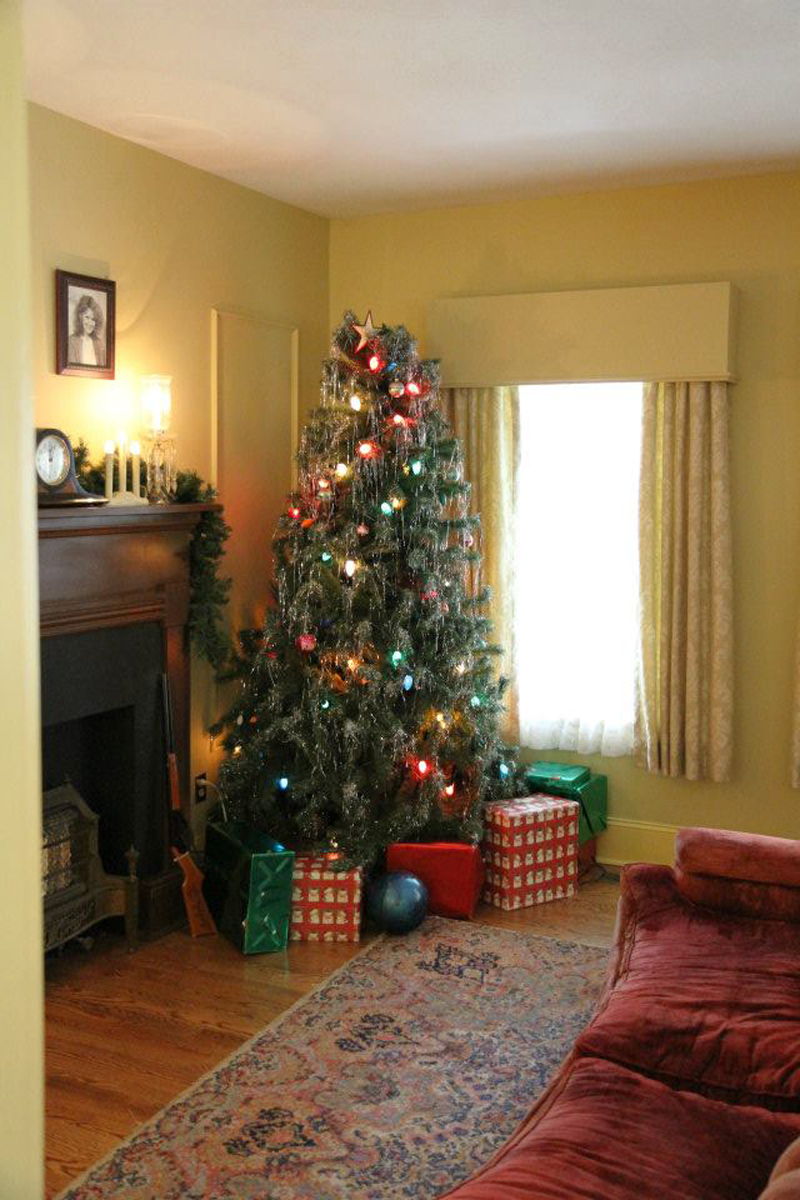 The back yard.  The shed is the one structure on the property than has not been restored in any way.  It is original to how it appeared in the film.

A few behind the scenes photos. 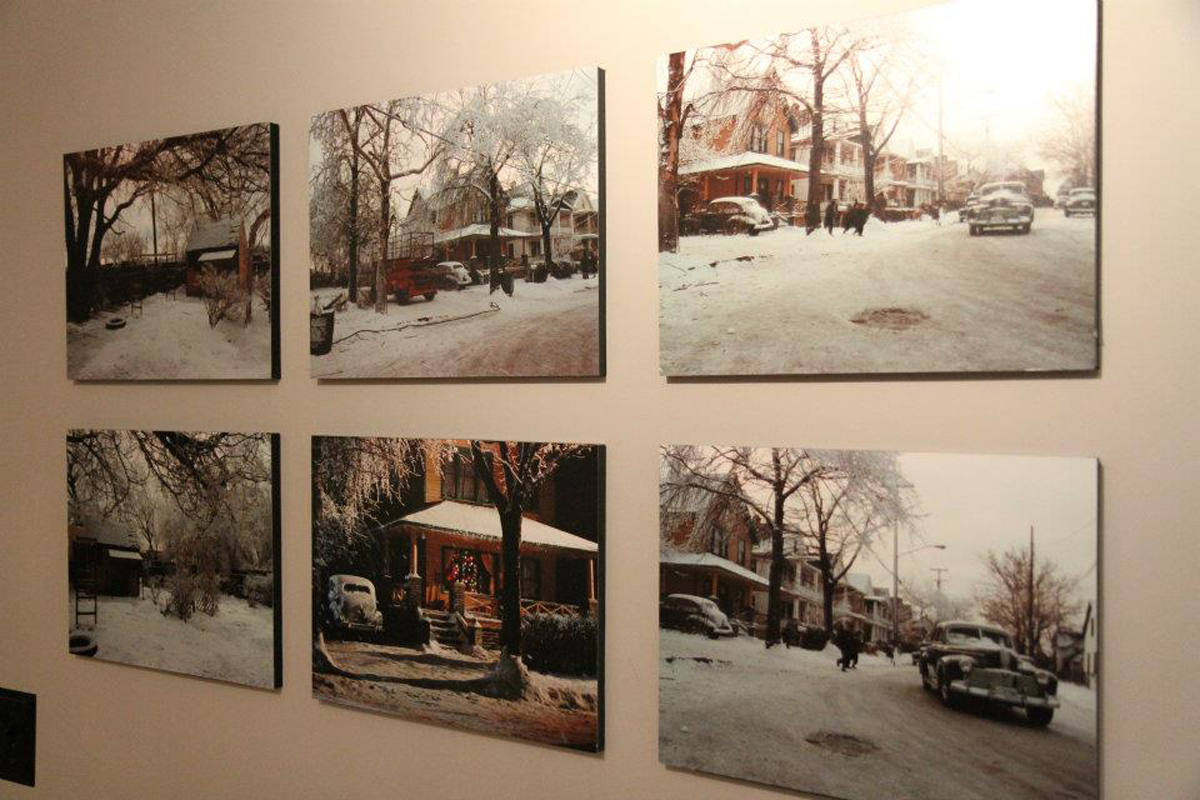 Some props and wardrobe from the film. 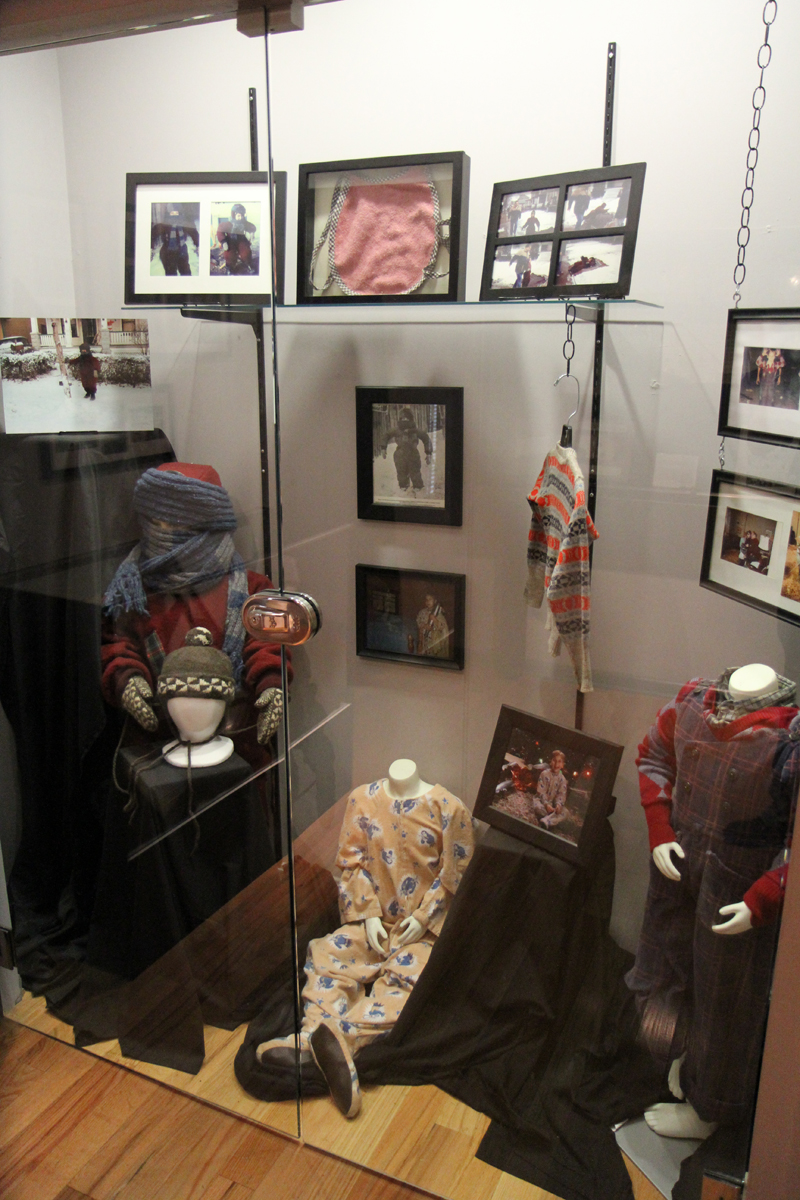 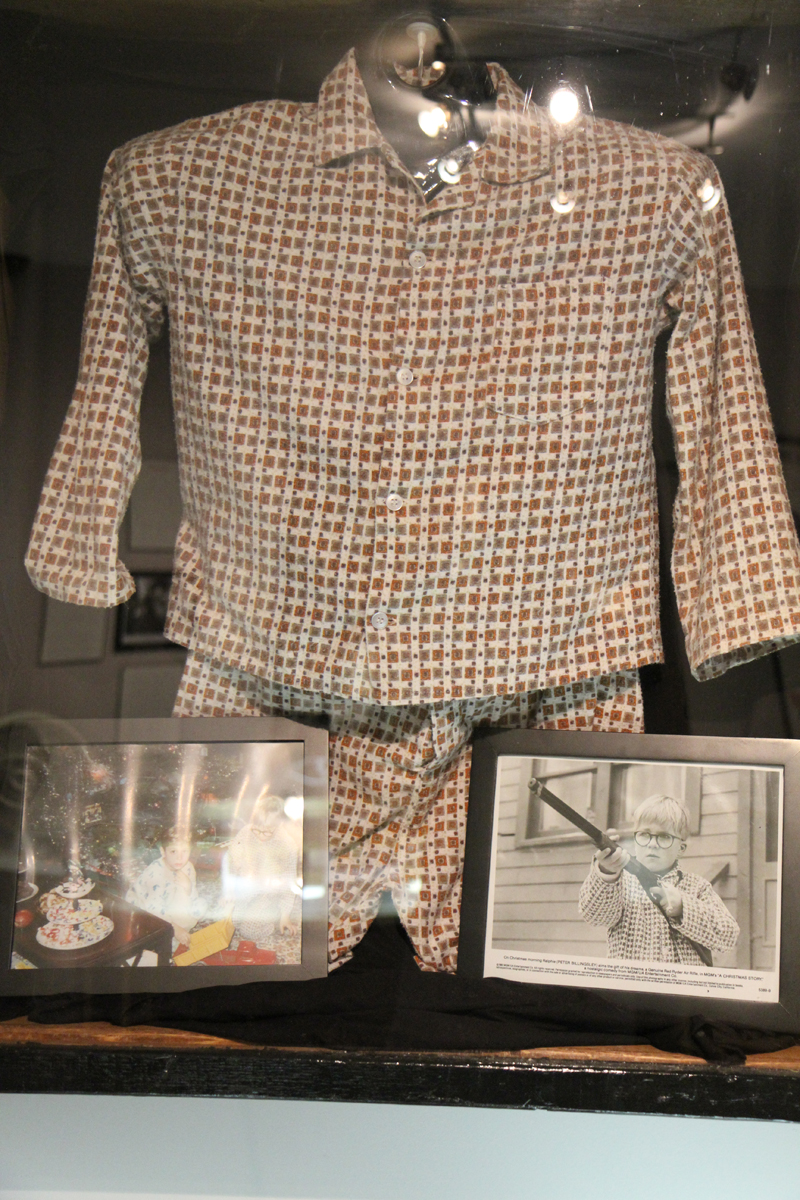 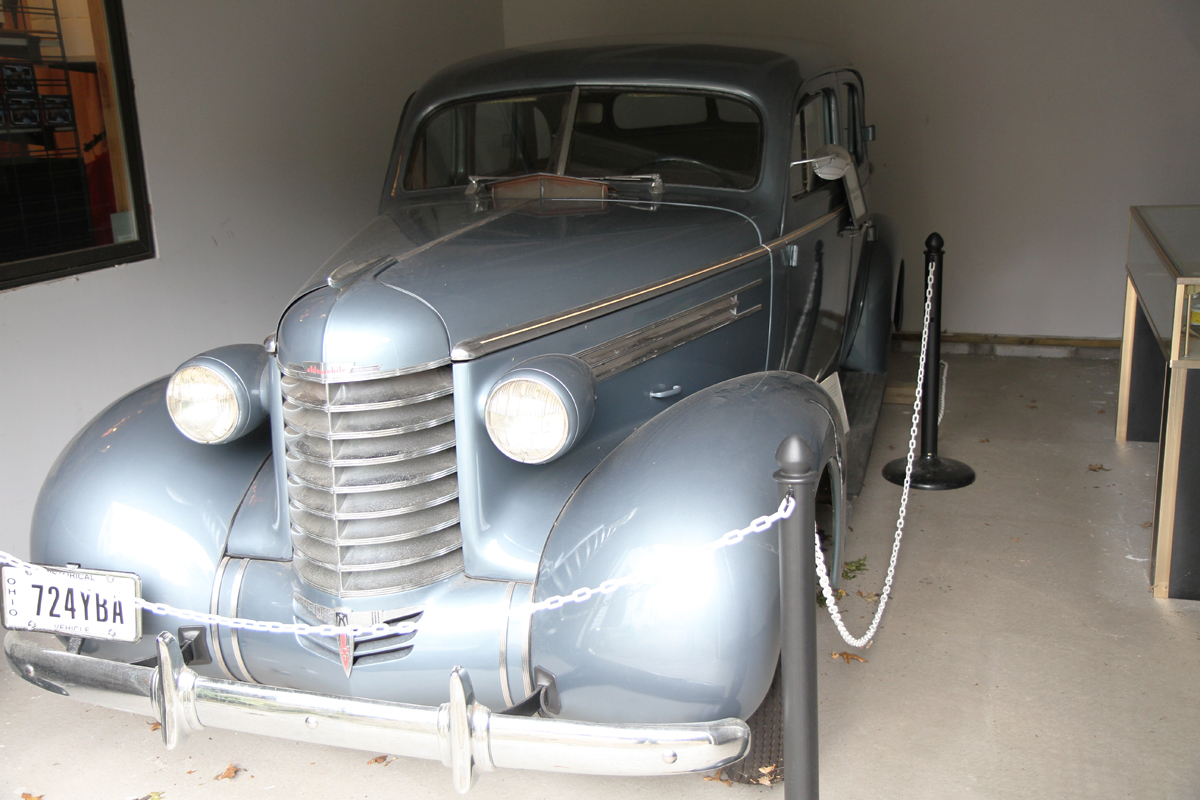 A miniature model of the house.

A French poster for the film.

Throughout the long-running comedy series, “Curb Your Enthusiasm,” Larry David’s character has lived at a couple different locations.  In more recent seasons, this Brentwood house has been his home.

For much of the series, Larry’s manager Jeff and his temperamental wife Suzie lived at this house in the Pacific Palisades. 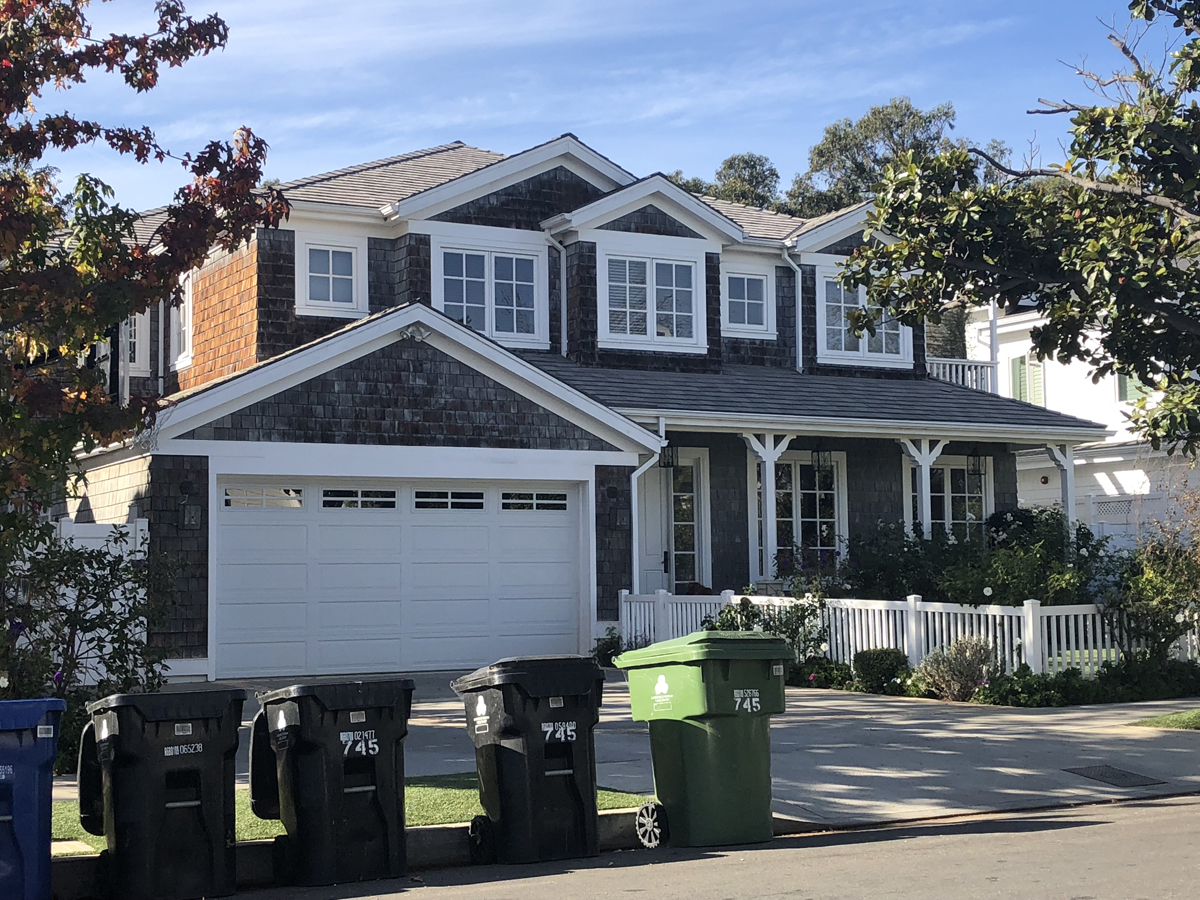 In the 1978 remake of “Invasion of the Body Snatchers,” the film’s most famous scene is easily the ending, involving Donald Sutherland’s character.  The film was shot around San Francisco, with the memorable ending shot at Civic Center Plaza in front of San Francisco City Hall.

One location arguably known more for the sum of films in which it’s been featured, more so than any one particular film, is Vasquez Rocks in Agua Dulce, California.  Formed by rapid erosion during uplift about 25 million years ago, the rock formations were later exposed by activity along the San Andreas Fault.  The unique look of the rocks, combined with it’s reasonable proximity to Hollywood, made Vasquez Rocks a frequent filming spot for motion pictures, serving as anything from desert terrain to foreign countries to alien planets.  Films which shot scenes at Vasquez Rocks include “Dante’s Peak,” “Jay And Silent Bob Strike Back,” “Hail, Caesar!,” “Blazing Saddles,” “Paul,” “Bill & Ted’s Bogus Journey” and dozens more.  Television shows which featured Vasquez Rocks in episodes include “The Fugutive,” “The A-Team,” “MacGuyver” and perhaps most famous of all, the original “Star Trek” series, where the rocks were seen in numerous episodes, serving as multiple different planets.  The rocks have also been seen in music videos for Michael Jackson, 311 and many more, as well as countless commercials.

The rocks are part of a Natural Area Park and open to the public from sunrise to sunset.  They receive a steady amount of visitors, many of whom attempt to climb the steep rocks, which are larger than they might appear in the photograph.

Set upon the streets of Los Angeles, Nicolas Winding Refn’s “Drive” utilized locations both in the city and spread out across the Valley.

The opening robbery was filmed at Maestro DJ and Electronics warehouse in L.A.

The Driver makes a deal with the criminals pressuring Oscar Isaac’s character Standard at MacArthur Park in front of the water.  The same park was seen in the 1993 film “Falling Down.”  For those unfamiliar with Los Angeles and planning a visit, MacArthur Park used to be considered a popular drug hangout. While there has been an effort to improve safety conditions at the park, it is still frequented by some addicts and homeless people.  Visitors are advised to use some caution.

Nino’s Pizzeria is a real pizza place, however the name of the restaurant is actually Vincenzo’s Pizza, located in Granada Hills.  The sign was swapped out by the production, which also added the checkerboard paneling over the front windows. 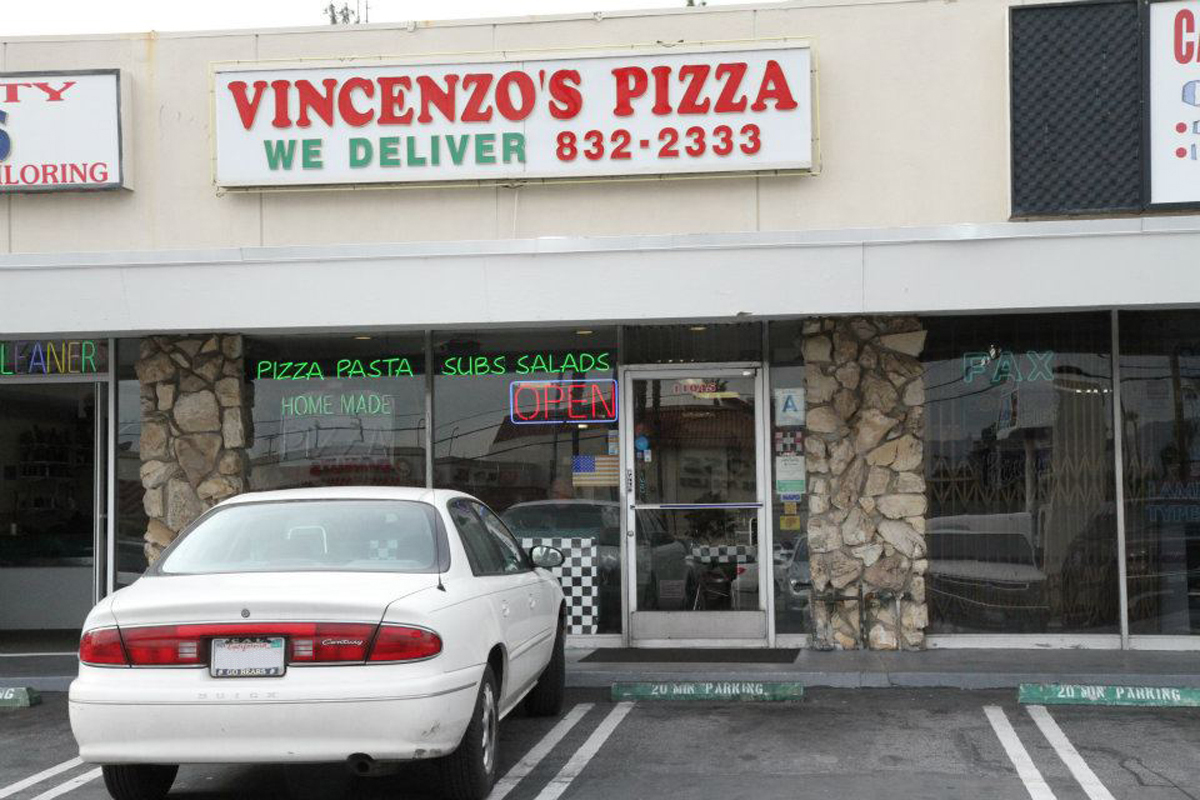 The pawn shop’s robbery gone wrong was filmed at the Santa Clarita Elk’s Lodge, which is a bit of a distance from the other locations.

The motel where a violent gunfight ensues is the Pink Motel in Sun Valley.  It is not an operational motel, rather a set used for filming or special events.  While we encountered no issues when visiting, according to many online comments, the property is not receptive to public visitation these days, preferring only professional clients.  So be sure not to trespass.  The motel property has been featured in countless productions, such as “The House Bunny,” as well as the TV shows “GLOW” and “Dexter”  Due to the frequent use in productions, the director deliberately chose to film only the interiors of the motel, as to avoid immediate recognition.

Many sequences in Marvel’s “The Avengers” shot in Cleveland, Ohio, which substituted for New York City.  The scene where Loki attempts to make a crowd kneel before him, followed by a battle against Iron Man and Captain America, was filmed in front of Tower City Center, part of Cleveland Public Square. 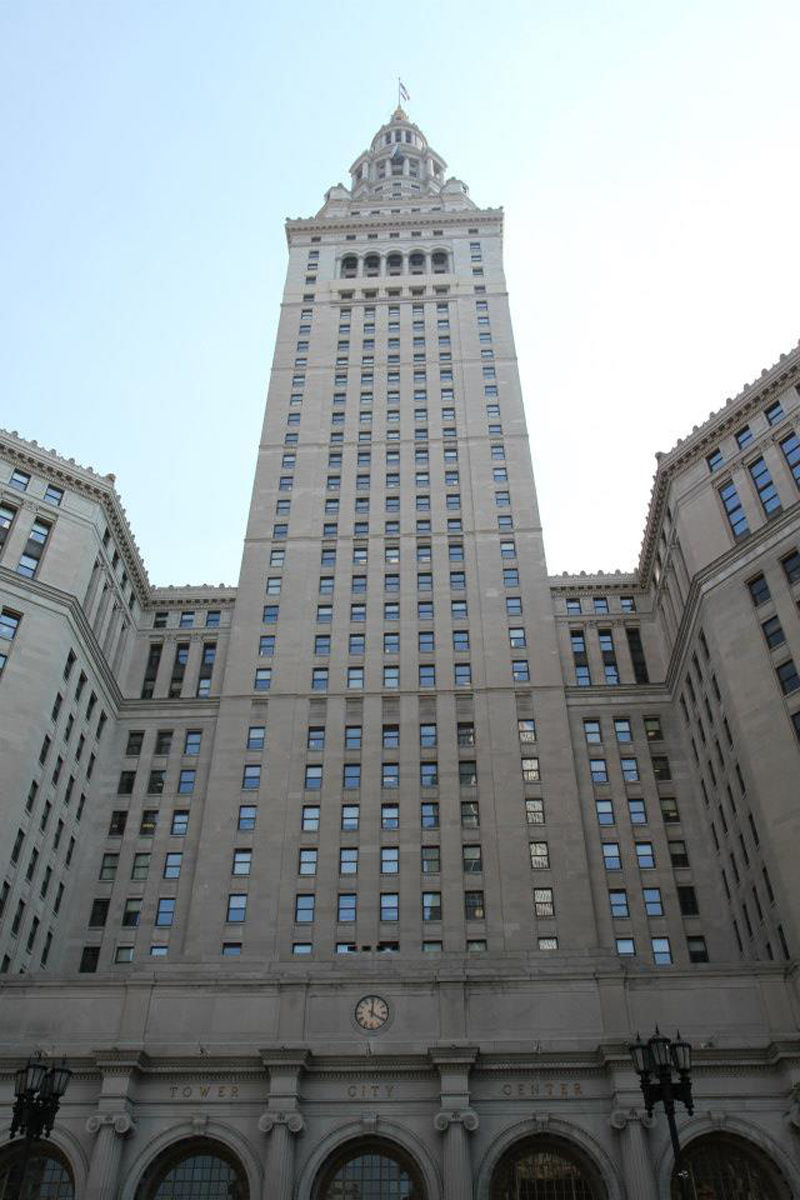 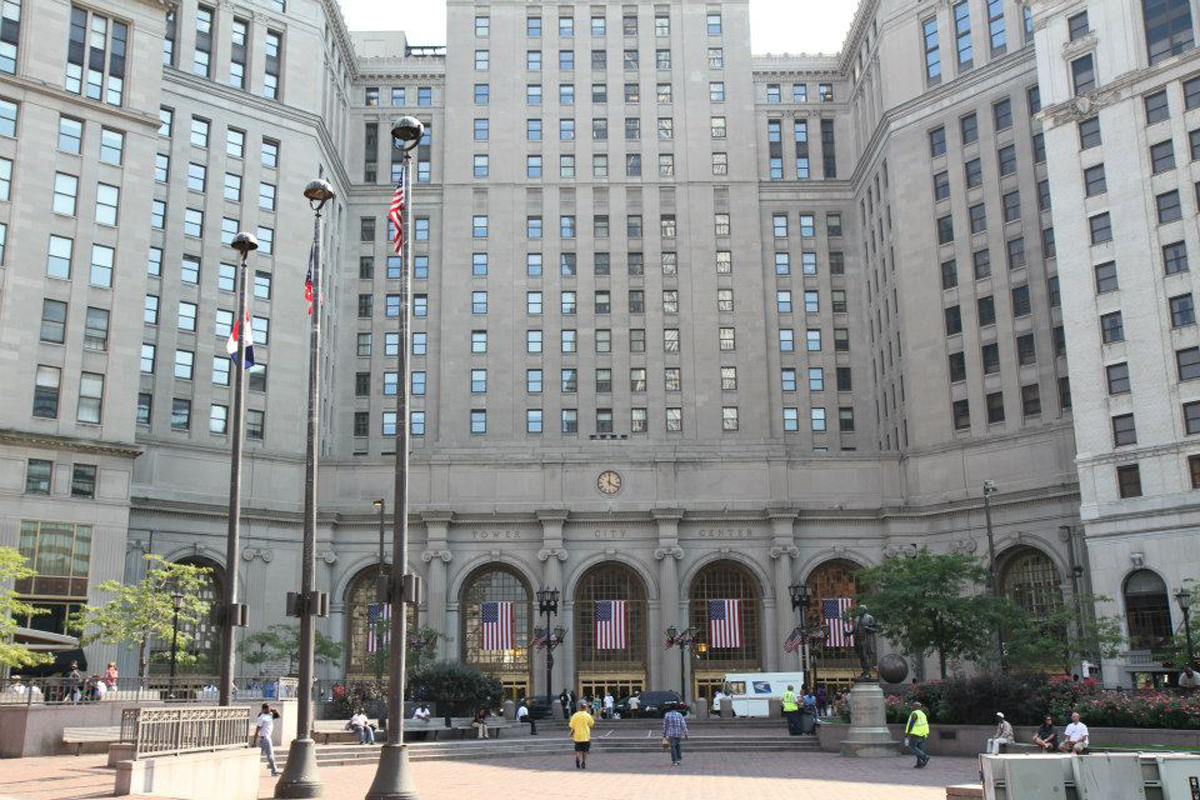 One of the most well known film locations in the Los Angeles area is Nakatomi Plaza from “Die Hard.”  The building is actually Fox Plaza, the headquarters of Twentieth Century Fox.  If you’re new to visiting film locations, this would be a good place to start.  It’s easily accessible and very iconic to anyone who knows the film.

One of John McClane’s outfits can be seen at the Hollywood Museum in Hollywood, California. 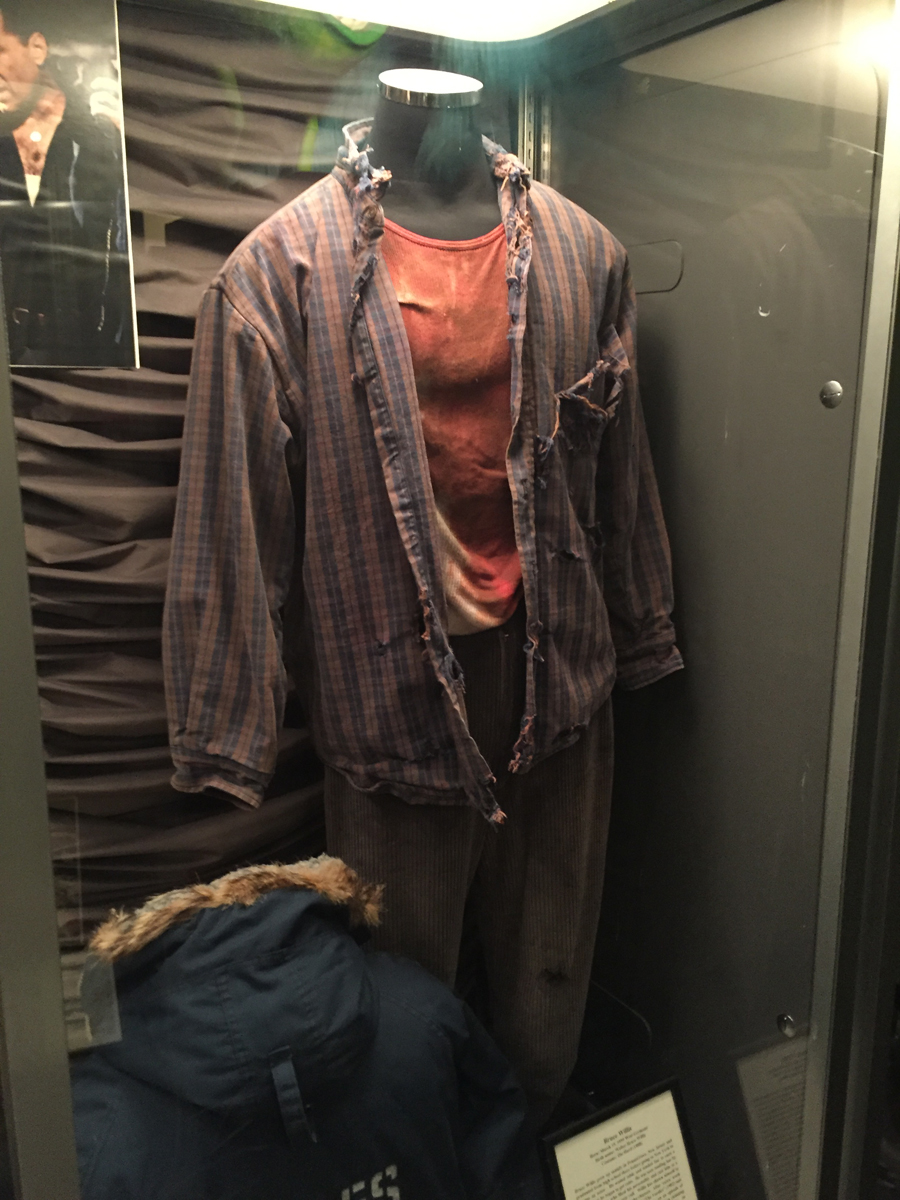