Sean Baker’s excellent 2017 film “The Florida Project” was shot almost entirely on location in Kissimmee, Florida, along the outskirts of Disney World in Orlando.  The vast majority of the film takes place at the Magic Castle Inn & Suites, where a slice of life story unfolds about a mother, Halley, and her daughter, Moonee, played by Bria Vinaite and Brooklynn Prince.

The Magic Castle Inn is a real, operational hotel in Kissimmee and still appears exactly as it did in the film. 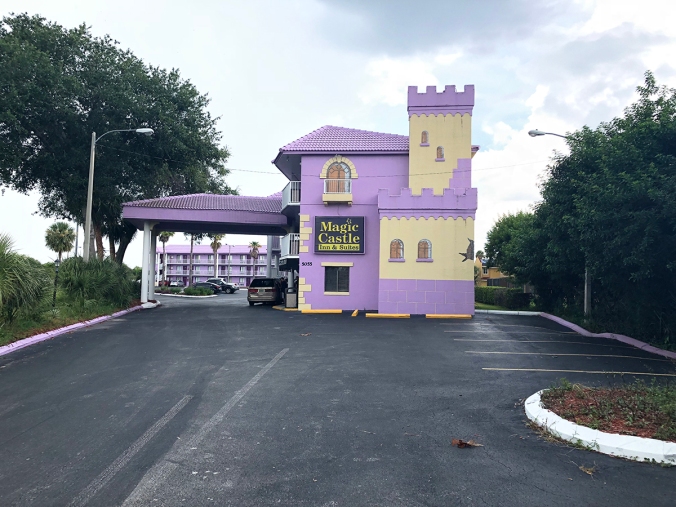 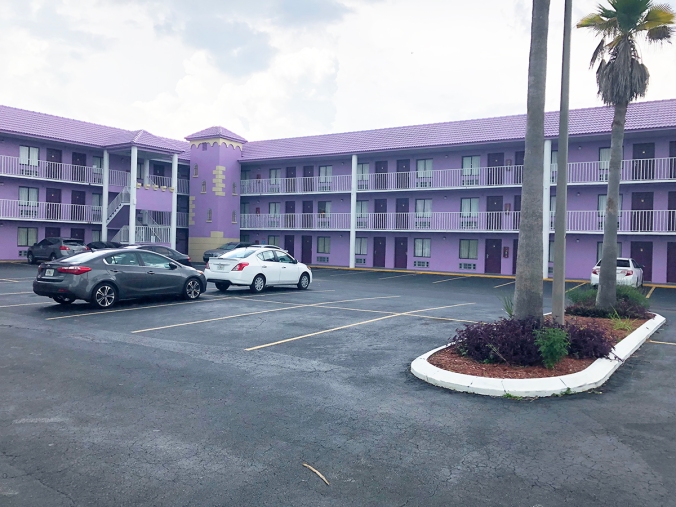 Halley and Moonee stay in room 323 for most of the film. 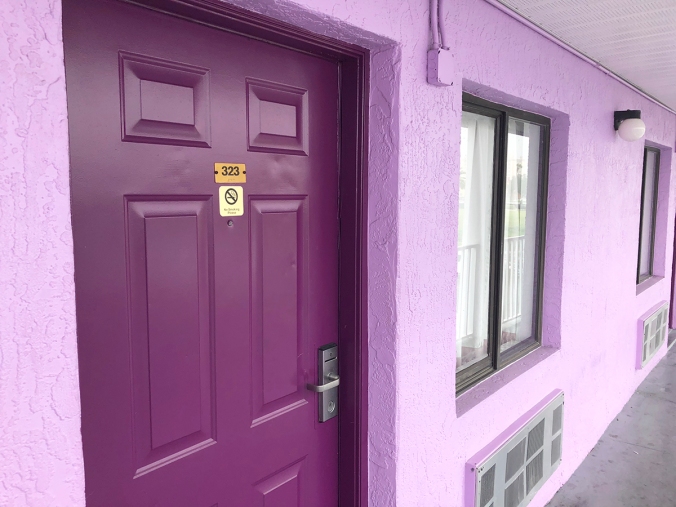 The kids often sit underneath these stairs near the front entrance of the hotel, including the film’s opening scene. 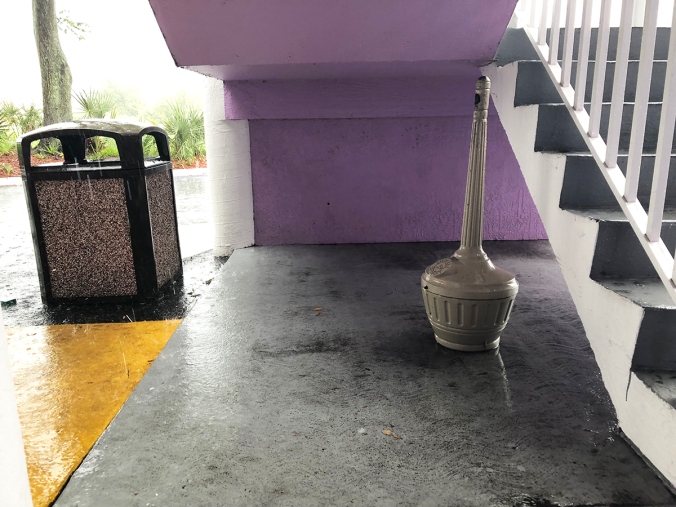 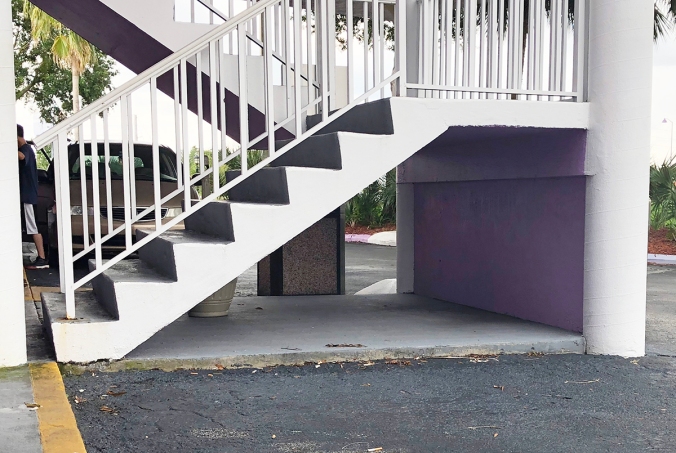 The hotel manager, Bobby, played by Willem Dafoe, comes over to the pool to tell an elder guest, who is sunbathing topless, to cover herself up. 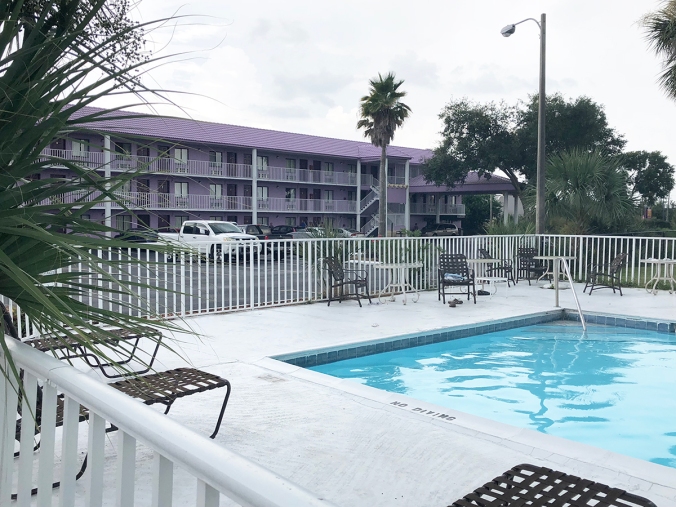 The kids are playing around these picnic tables when a child predator approaches them and strikes up a conversation.  Bobby, seeing what’s happening from afar, quickly intervenes.

In the open field behind the picnic tables, helicopters regularly take flight.  Lacking the funds to control this, the filmmakers instead incorporated the helicopters into the film. 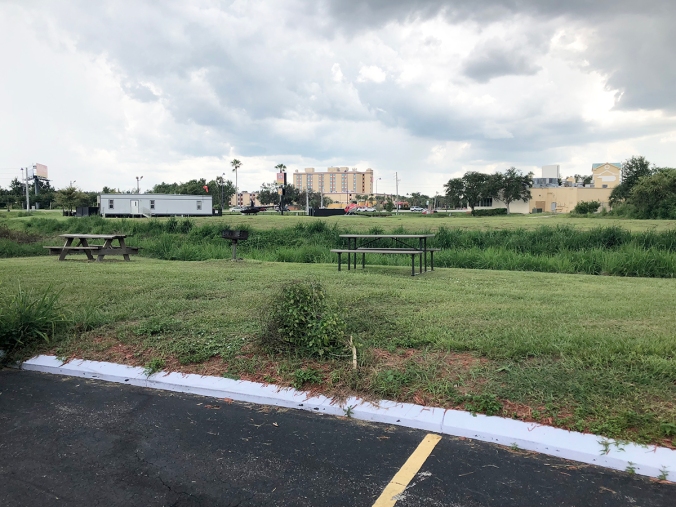 Another view of the hotel, which was filmed from nearly every angle imaginable over the course of the film.  We won’t attempt to document them all. 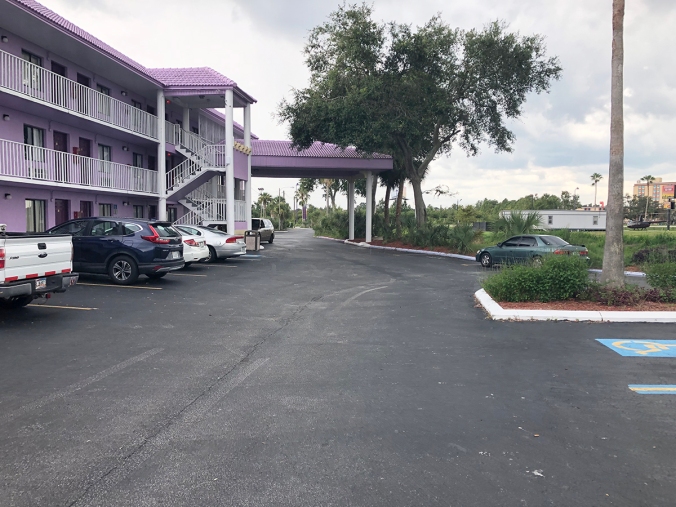 Jancey stays at the former Futureland Inn.  The hotel has since changed ownership and is currently known as the Paradise Inn.  Gone are the distinctive rockets from the front sign.  What does appear the same, other than a paint job, is the room where Jancey and her mom stay, which the kids visit early in the film, spitting on the car from the second level. 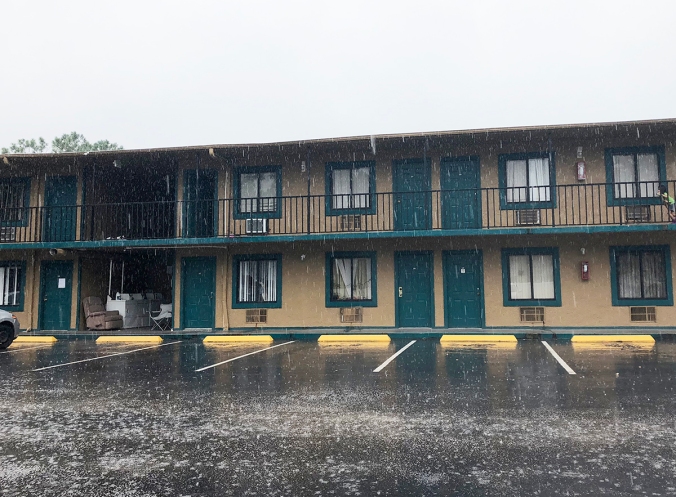 In Sam Raimi’s original 2002 “Spider-Man” film, Peter Parker, played by Tobey Maguire, works at the Daily Bugle as a freelance photographer who has an uncanny ability to capture photos of Spider-Man.  Famous for it’s triangular shape, the Flatiron Building in Manhattan is one of the more iconic skyscrapers in New York City.

Norman stands on the stairs and talks to his son, Harry Osborn, played by James Franco.

The scene where Mary Jane Watson, played by Kirsten Dunst, kisses an upside down Spider-Man in the rain wasn’t filmed in New York City either.  It was filmed on the Warner Bros. Lot in Burbank, California.  Designed to look like New York alley, this facade can be seen as part of their studio tour.

The bike Peter rides in the film can be found on display at Sony Pictures Studio.