The 1993 action film “Demolition Man,” starring Sylvester Stallone as John Spartan and Wesley Snipes as Simon Phoenix, is set in the futuristic “San Angeles,” where San Diego and Los Angeles have become one giant metropolis.  The production likewise filmed scenes in both cities.

The opening shot depicts a burning Hollywood sign from behind.  There is a public hiking trail that goes up to and behind the sign.  The sign itself is heavily monitored by security.

The SAPD police headquarters can be found in Westlake Village, near Thousand Oaks. The same building was featured in the 1980s comedy “My Stepmother Is An Alien.”

The Los Angeles Convention Center was composited into a futuristic view of Cocteau’s office.  This particular view is at the corner of S Figueroa St and Pico Blvd.

As John Spartan and Lenina Huxley, played by Sandra Bullock, drive to an upscale Taco Bell restaurant, they drive past this building, which is actually the San Diego Convention Center.  The Convention Center famously hosts the annual San Diego Comic-Con.  In 2018, as part of the Comic-Con there was a pop-up Taco Bell celebrating the film by recreating the set, as well as featuring props from the film.

After a brief encounter with Egdar Friendly, played by Dennis Leary, Spartan and Huxley drive down the The America Plaza Trolley Station, located at the intersection of Kettner Blvd and W Broadway in San Diego.  Spartan apologizes to Huxley as they drive.

The Pacific Design Center served as the apartment of Huxley.  Many films have shot here, including “Bowfinger” and “Her.”  The interiors were also featured in the TV series “Westworld.”

Spartan, Huxley and Garcia, played by Benjamin Bratt, go looking for Phoenix in the underground by entering through a manhole at this business park.  Despite being a common business area with many pedestrians, located on one of the busiest roads in Los Angeles, security has very alarmist reactions to even casual photography.  There are no “private property” or “no trespassing” signs anywhere to be seen, but they are confrontational if you attempt to take a photo.

Simon Phoenix later emerges from the underground in the same area.

John Spartan and Huxley emerge from the San Diego Innovation Center, driving past the pyramid in front.

Spartan and Huxley pursue Phoenix in a car chase into the Second Street Tunnel in Downtown L.A.  This is a popular filming location, appearing in such films as “Kill Bill,” “The Terminator,” “Blade Runner,” “Con Air,” “Independence Day” and many more.

The car chase continues down Grand Lower in Downtown L.A.  This is another popular area for both filming and photography.  It has been featured in countless films, including “The Terminator,” “Cobra,” “Batman Forever,” “Repo Man” and many more.  It was also featured in the TV series “Westworld.”

The Cryo-Penitentiary where the final confrontation takes place was filmed at a real jail in Downtown Los Angeles; the Metropolitan Detention Center.  This courtyard area seen in the film sits between several buildings on the block and is open to the public.

Here is another angle seen in the film of the same building, this time facing Alameda St.

The fully automated police cruiser driven by Spartan and Huxley in the film was featured on display at the Peterson Automotive Museum in Los Angeles, as part of an exhibit entitled “Hollywood Dream Machines: Vehicles Of Science Fiction and Fantasy” from May 2019 through May 2020.  The vehicle was a 1992 General Motors Ultralite.

The 2000 cheerleader comedy “Bring It On” was set around the greater San Diego area and the production likewise took place there.  Torrance, played by Kirsten Dunst, lives in this home, located in a cul-de-sac in the town of Cardiff, California. 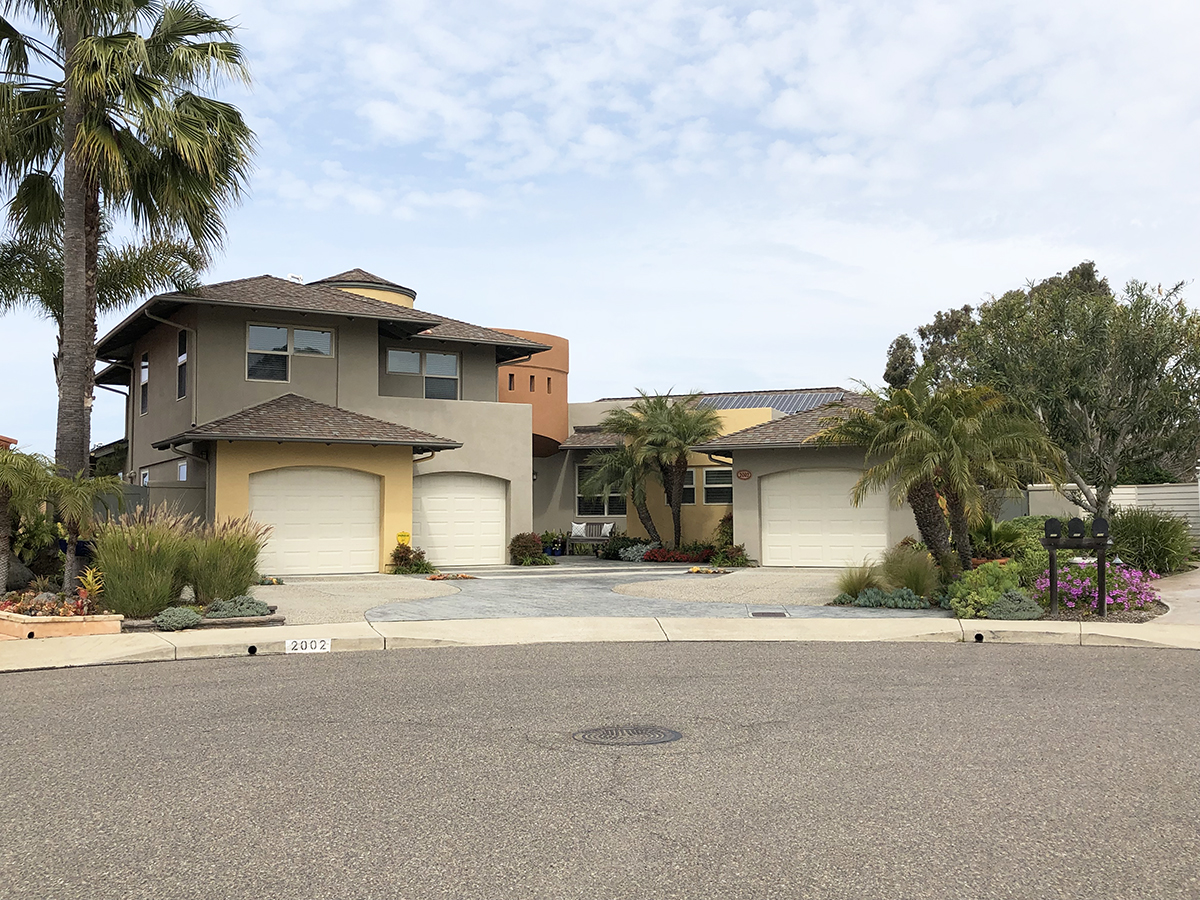 Missy and Cliff, played by Eliza Dushku and Jesse Bradford respectively, live at this home in La Jolla. 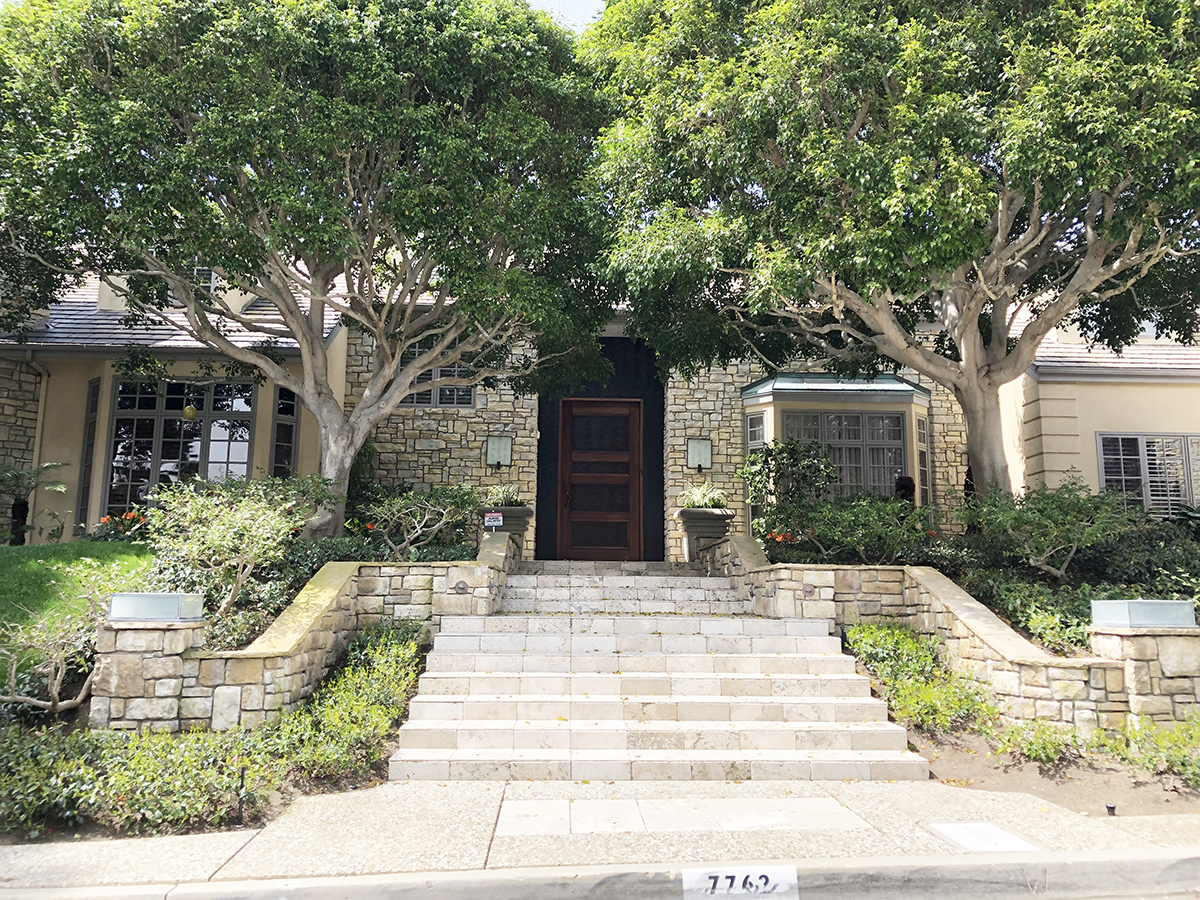 In the town of Oceanside, California, about 40 miles north of San Diego, you’ll find the iconic house from the 1986 hit “Top Gun.”  Charlie, played by Kelly McGillis, lives at this beachfront cottage, where she is visited by Maverick, played by Tom Cruise.  The two make love while Berlin’s “Take My Breath Away” plays, in one of the most famous love scenes of the 1980s.

The house sat vacant and boarded up for years, having fallen into a state of disrepair, with fencing erected around it in an effort to minimize vandalism.  At the time of filming, several other houses existed along the block, but all were demolished except for this one.  Hotel development has since taken place in 2020 on this block, but the “Top Gun” house drives tourism to Oceanside, so rather than demolition, the house was relocated about a block away and restored (much like what happened with the Michael Myers house from the original “Halloween“).  While the restoration is much needed, we were able to capture it at it’s original site while it still remained there. The house now sits in it’s permanent location across from the Oceanside Fishing Pier, on N Pacific St, between Pier View Way and Mission Ave.

Here is a front facing view of the house before the 2020 restoration, where you can see a poster for the film over one of the boarded up windows.

For scenes set at the back of the house, a completely different location stood in, behind the medical building of Paramount Studios.

In San Diego, you’ll find the bar where Maverick and Goose sing “Great Balls of Fire.”  Kansas City Barbeque, located not far from the city’s convention center where their famous Comic Con takes place, makes no secret of their connection to the film.  In fact, it’s one of the main themes of the restaurant.  Here is the room where Goose played the piano, which was on the wall to the left.

The piano itself has been relocated to a different room in the restaurant.

The walls are adorned with tons of imagery and promotional items from the film.

In a later scene, Maverick sits at this bar.

They even have a neon sign for the film in the front windows.

It’s always nice to see places embrace their film history so much.  Be sure to check it out if you’re in the San Diego area.

The classic Billy Wilder comedy, “Some Like It Hot,” starring Marilyn Monroe, Tony Curtis and Jack Lemmon, filmed at the Hotel Del Coronado in Coronado, California, just across the San Diego Bay.  The Victorian beach resort opened in 1888 and still goes strong today.  The cast and crew made their way down from Los Angeles to film at the resort, where they also stayed as guests during the production. 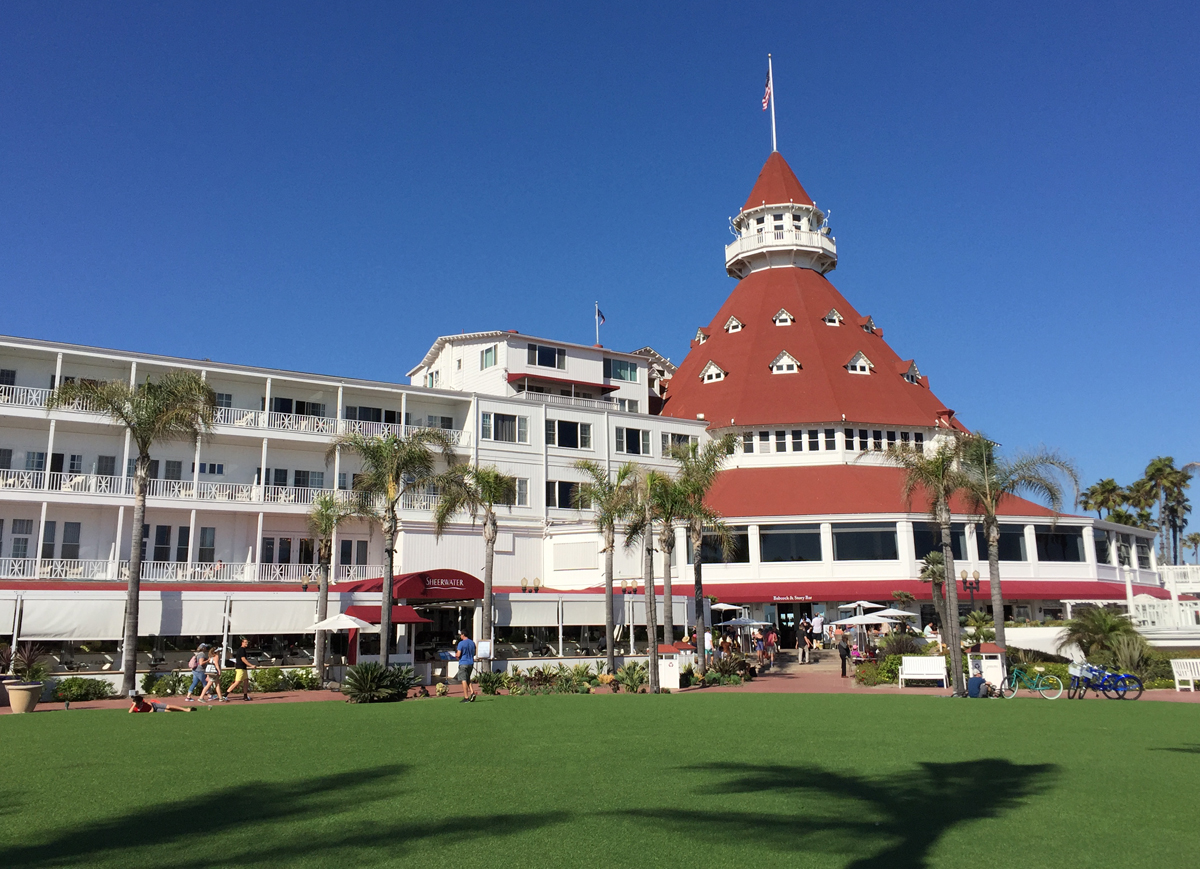