Much like the previous installments, the 2018 sequel “Jurassic World: Fallen Kingdom” filmed largely in Hawaii, with some additional filming in England.  After the events of “Jurassic World,” the island of Isla Nulabar is heavily damaged and mostly abandoned.  A team of mercenaries arrive on the island to collect DNA as a volcano nears eruption.

Ken Wheatley, played by Ted Levine, leads a team on an expedition back into Jurassic World.  Owen, played by Chris Pratt, and Claire, played by Bryce Dallas Howard, join the expedition to track down the dinosaurs, in hopes of relocating them to a new sanctuary.  The convoy travels across this valley, which is seen in both “Jurassic Park” during the gallimimus stampede and in “Jurassic World,” when the boys ride a train out to the Gyrosphere area.  This area can be found on Kualoa Ranch in Oahu, Hawaii. 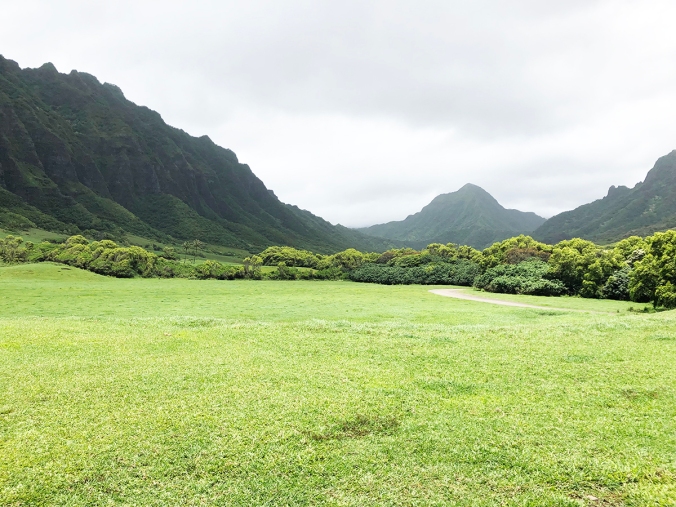 Much like in “Jurassic World,” the mountains seen here have a railway added via CGI.

The team arrives at this bunker, where they are able to get inside and activate the dinosaur tracking system.  The set from the film remains in tact at Kualoa Ranch.

Just as depicted in the film, right next to the bunker is the mountain top where the volcano threatens to blow throughout the film.  If you’re facing the bunker set, it is located directly on the left.

There are a wide variety of tours available at Kualoa Ranch, more than one of which is film related. We recommend the Premier Movie Site Tour, as it takes you to many filming locations exclusively featured on that particular tour.  If you make it out to Hawaii, it is a highly recommended place to visit.