On the Warner Brothers Studio Tour, you can find this exosuit costume from the film “Edge of Tomorrow,” starring Tom Cruise and Emily Blunt.

Filming for the 2002 Steven Spielberg sci-fi film “Minority Report,” starring Tom Cruise, took place mostly around Los Angeles, Washington D.C. and Virginia.  In one action scene, a chase on rocket-packs occurs in front of this building.  This is actually part of the Warner Bros. backlot in Burbank, California.  The same building was seen in the 1994 Jim Carrey comedy, “The Mask.” 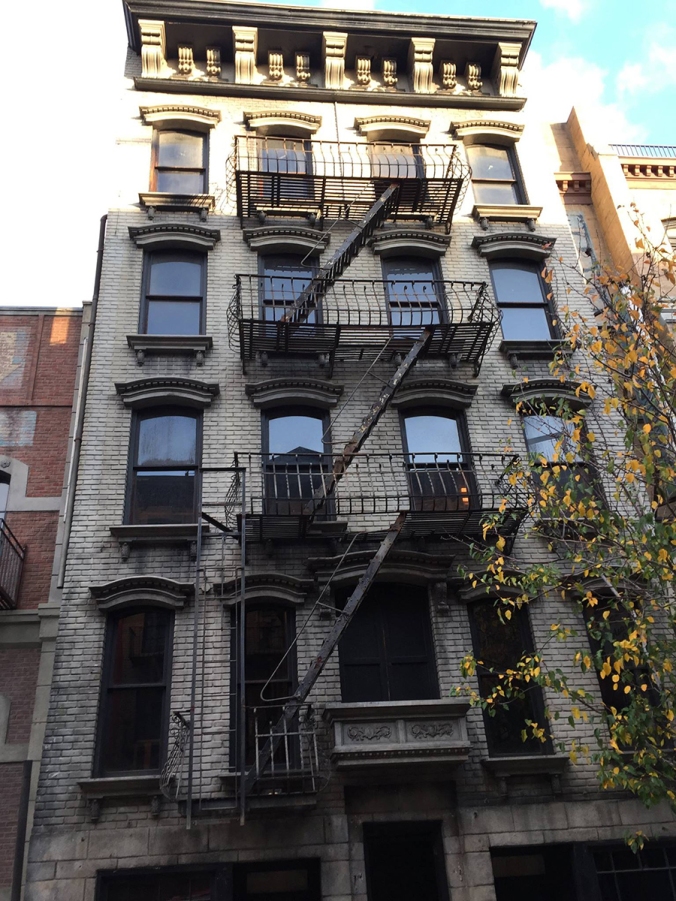 The Peterson Automotive Museum in Los Angeles, California ran an exhibit entitled “Hollywood Dream Machines: Vehicles Of Science Fiction and Fantasy” from May 2019 through May 2020. Included on display were some vehicles from the film.

As a manhunt ensues for John Anderton, played by Tom Cruise, as he is chased by Agent Danny Witwer, played by Colin Farrell.  As the chase enters a car factory, Witwer watches as this “2054” Lexus Coupe is assembled around Anderton, who immediately drives it off and escapes. 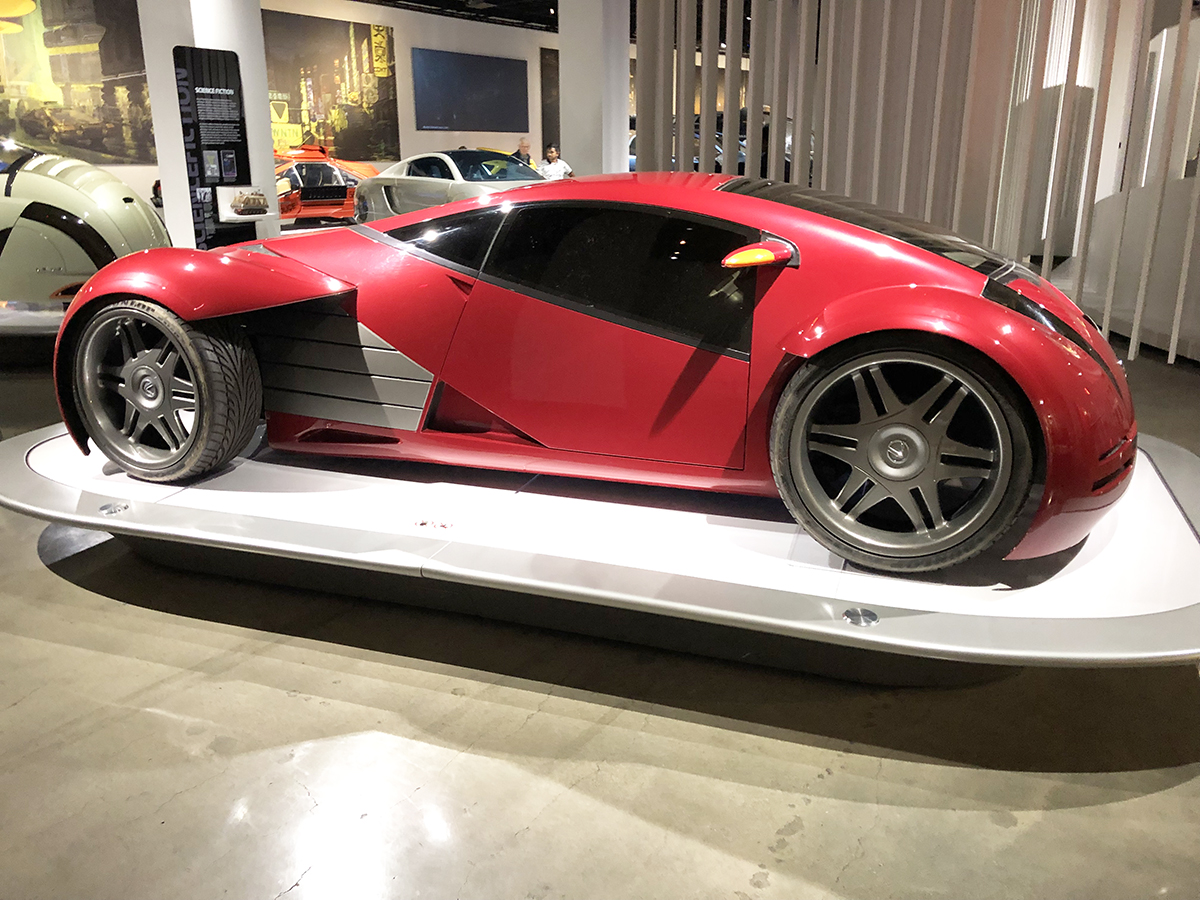 As Anderton drives this “2054” Lexus Maglev Pod, a computer controlled iris recognition system spots him and stops the vehicle.  As police pursue, Anderton escapes out the window. 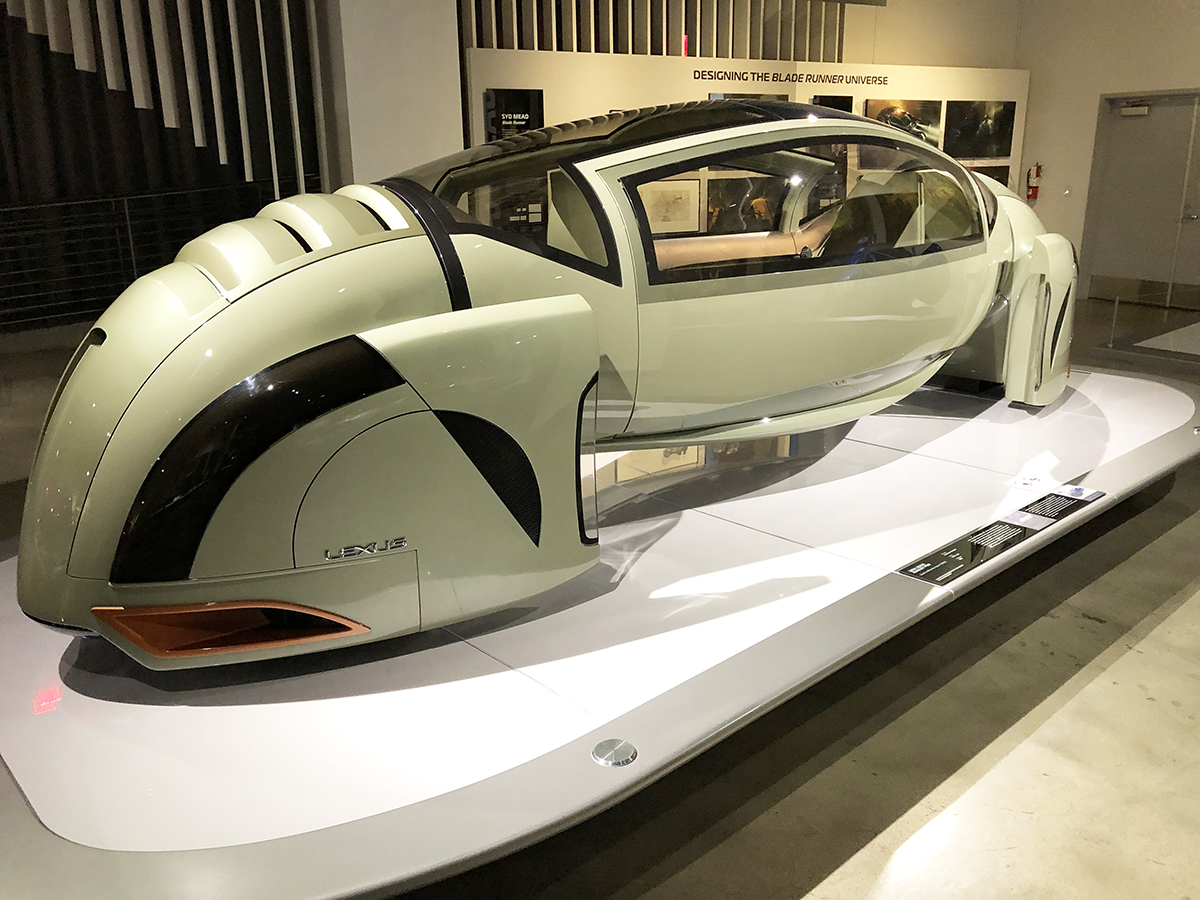 As Anderton tries to evade police in a mall, an advertisement plays for this “2054” Lexus Roadster. 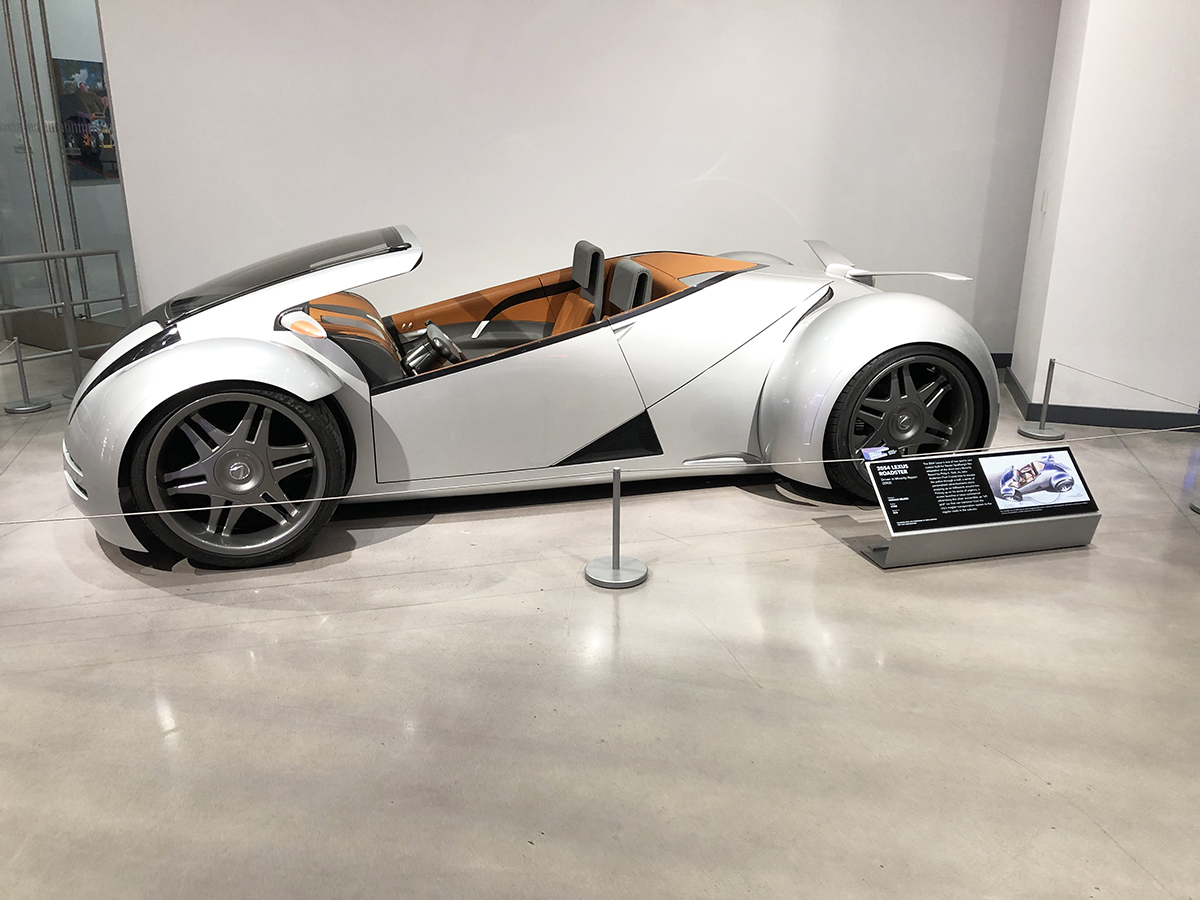 Here is a closer look at the interior of the car. 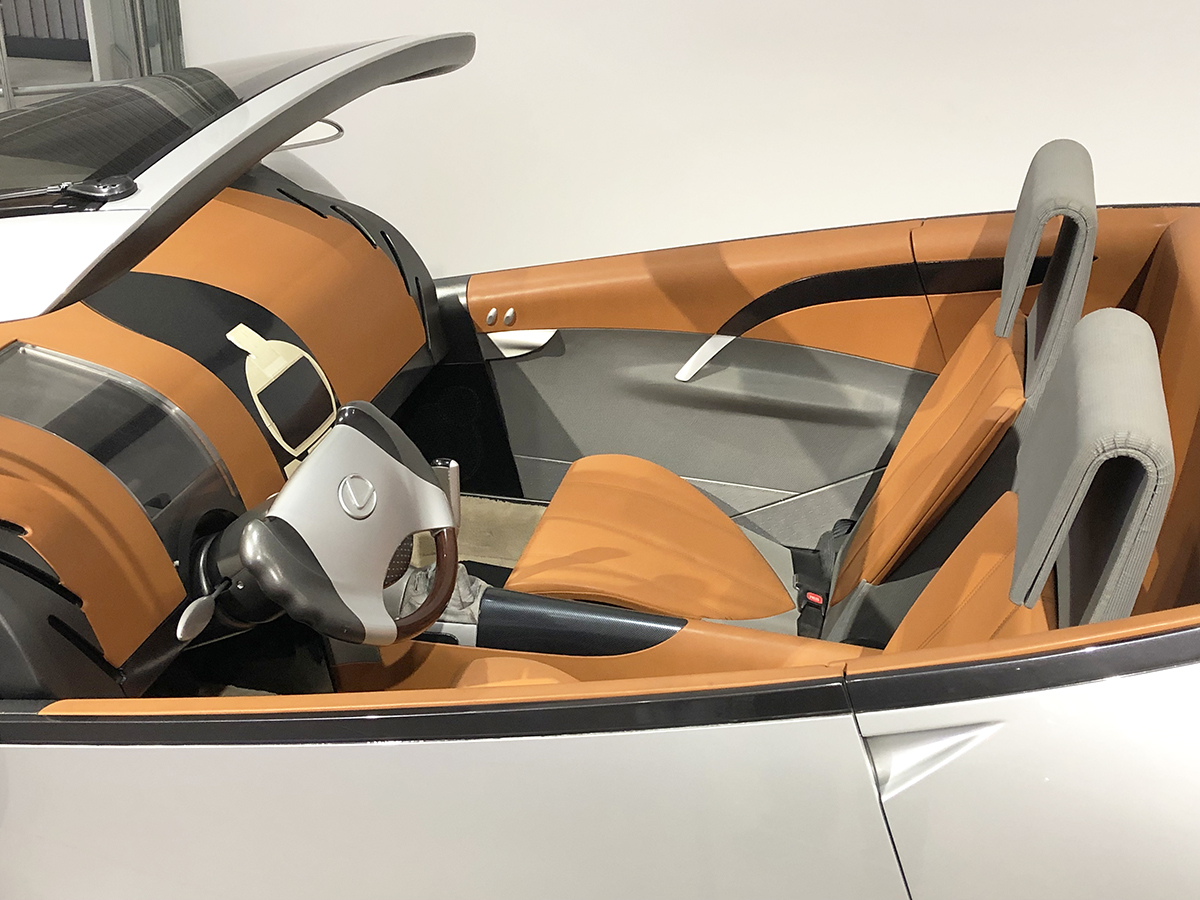 In the town of Oceanside, California, about 40 miles north of San Diego, you’ll find the iconic house from the 1986 hit “Top Gun.”  Charlie, played by Kelly McGillis, lives at this beachfront cottage, where she is visited by Maverick, played by Tom Cruise.  The two make love while Berlin’s “Take My Breath Away” plays, in one of the most famous love scenes of the 1980s.

The house sat vacant and boarded up for years, having fallen into a state of disrepair, with fencing erected around it in an effort to minimize vandalism.  At the time of filming, several other houses existed along the block, but all were demolished except for this one.  Hotel development has since taken place in 2020 on this block, but the “Top Gun” house drives tourism to Oceanside, so rather than demolition, the house was relocated about a block away and restored (much like what happened with the Michael Myers house from the original “Halloween“).  While the restoration is much needed, we were able to capture it at it’s original site while it still remained there. The house now sits in it’s permanent location across from the Oceanside Fishing Pier, on N Pacific St, between Pier View Way and Mission Ave.

Here is a front facing view of the house before the 2020 restoration, where you can see a poster for the film over one of the boarded up windows.

For scenes set at the back of the house, a completely different location stood in, behind the medical building of Paramount Studios.

In San Diego, you’ll find the bar where Maverick and Goose sing “Great Balls of Fire.”  Kansas City Barbeque, located not far from the city’s convention center where their famous Comic Con takes place, makes no secret of their connection to the film.  In fact, it’s one of the main themes of the restaurant.  Here is the room where Goose played the piano, which was on the wall to the left.

The piano itself has been relocated to a different room in the restaurant.

The walls are adorned with tons of imagery and promotional items from the film.

In a later scene, Maverick sits at this bar.

They even have a neon sign for the film in the front windows.

It’s always nice to see places embrace their film history so much.  Be sure to check it out if you’re in the San Diego area.

In the 1994 Neil Jordan adaptation of Anne Rice’s “Interview With The Vampire,” Louis, played by Brad Pitt, recounts his story to Malloy, played by Christian Slater at this San Francisco hotel. 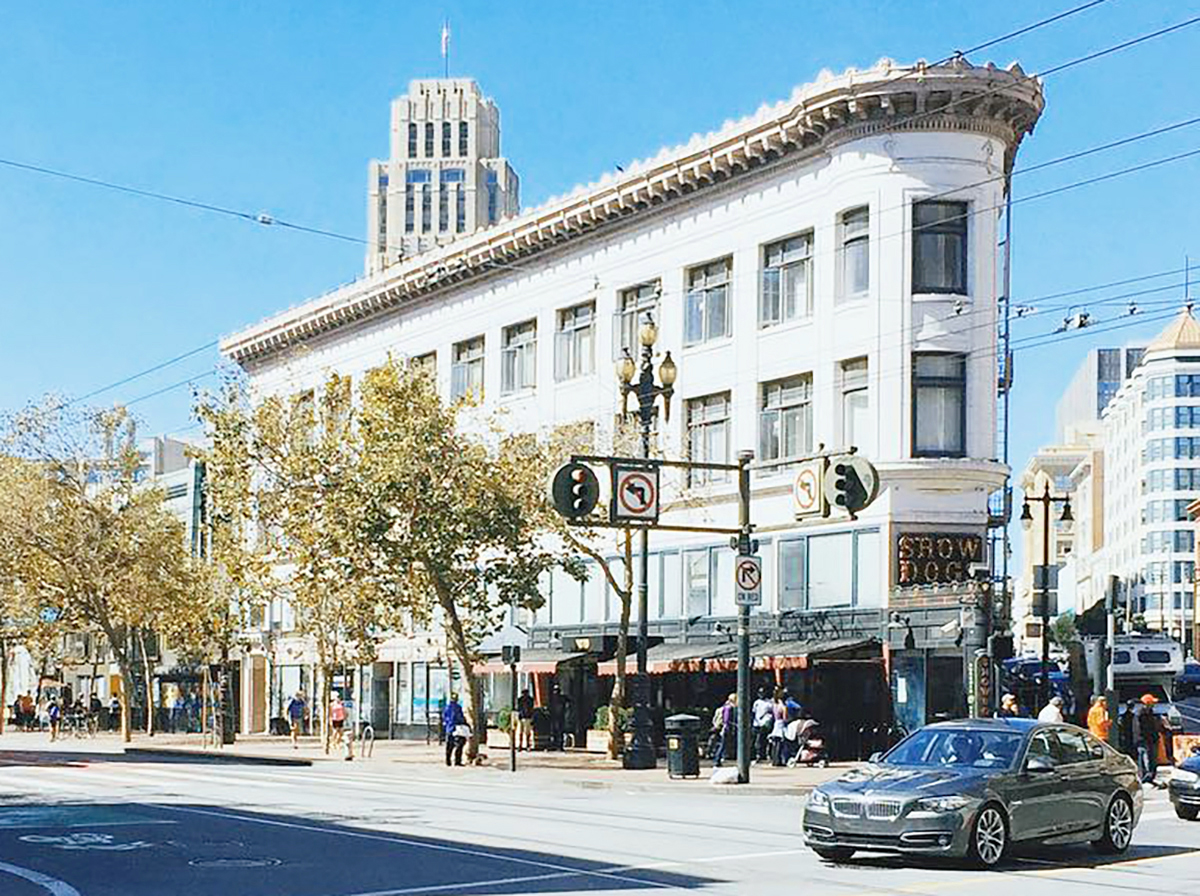 Louis lives at this estate, which is the Oak Alley Plantation in Louisiana.  The plantation is open to public tours.  This house and its distinct row of trees can actually be seen from the road of LA-18.  However, you might find it difficult to stop and get a photo, as there is no parking along the street.  The same home was also seen in the 1998 film “Primary Colors.”

In the film’s closing scenes, Malloy is unexpectedly met by Lestat, played by Tom Cruise, as they cross the Golden Gate Bridge. 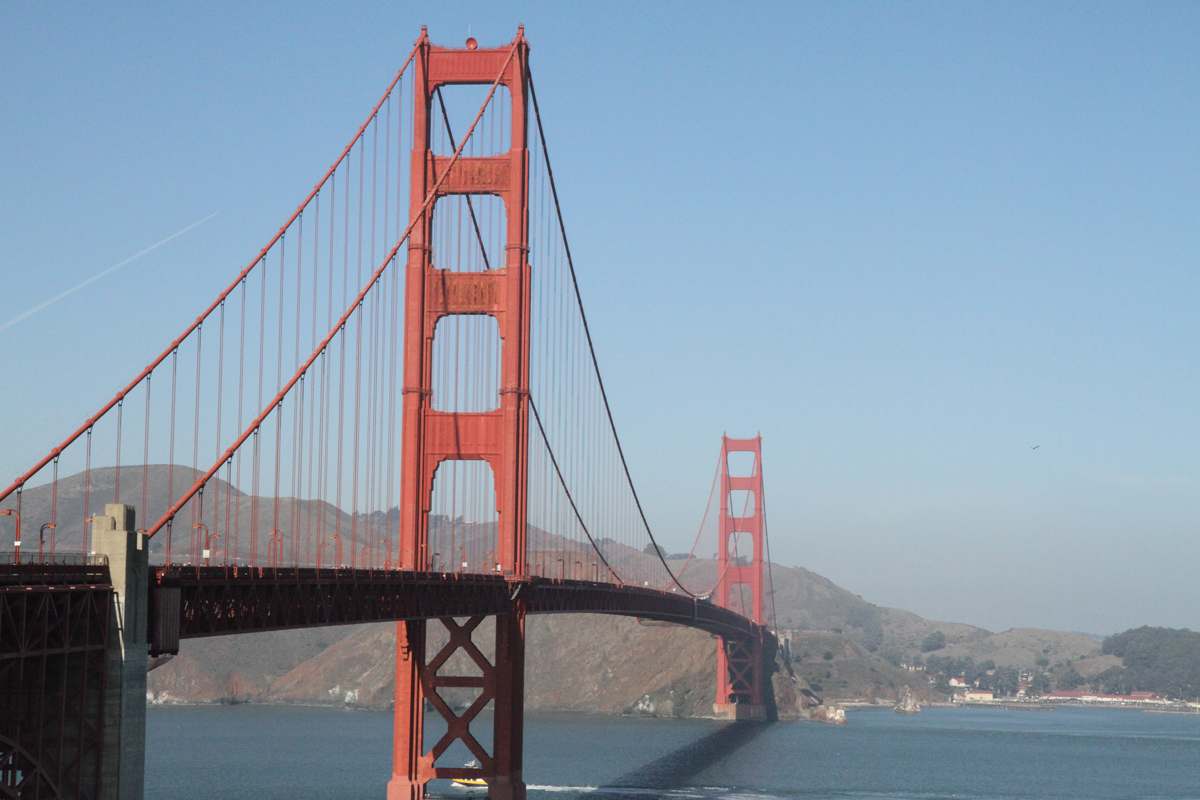 One of the most interesting things to see on the Universal Studios Tour at Universal Studios Hollywood is the plane crash set from the 2005 Steven Spielberg film “War Of The Worlds.”  It is a very intricate set, with lots of full-scale, realistic wreckage.  Cars, ambulances and even an actual, out of use, Boeing 747 were all used for film.  Universal made it an interactive exhibition, with fires and smoke as you pass through. 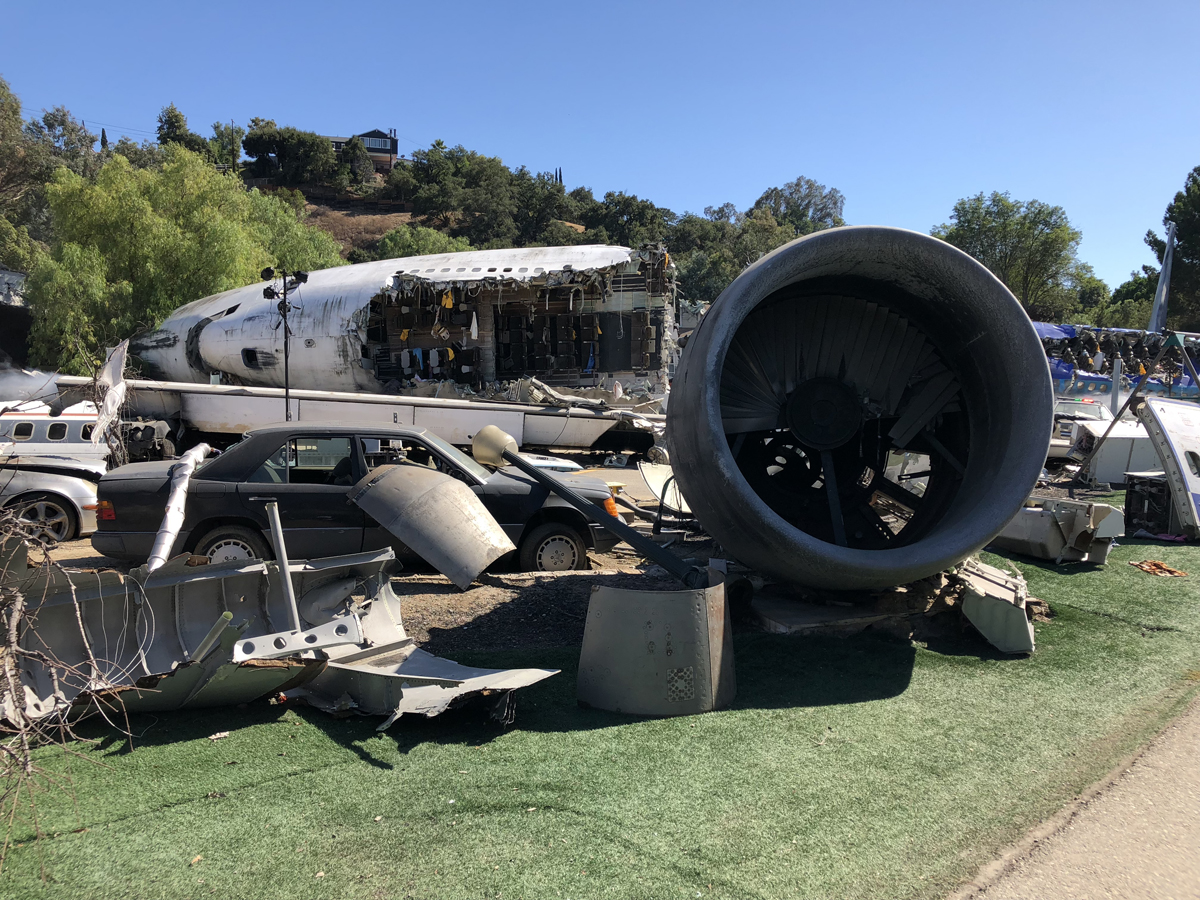 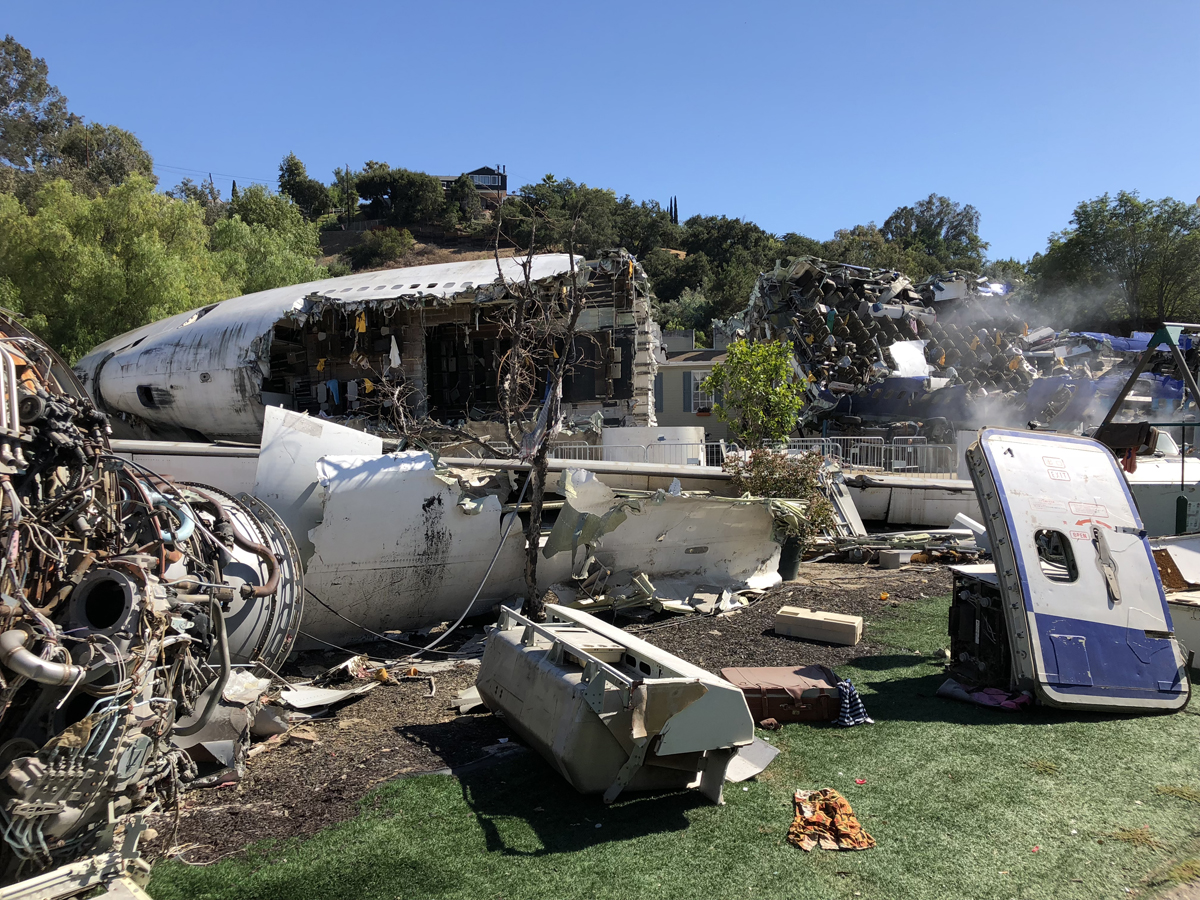 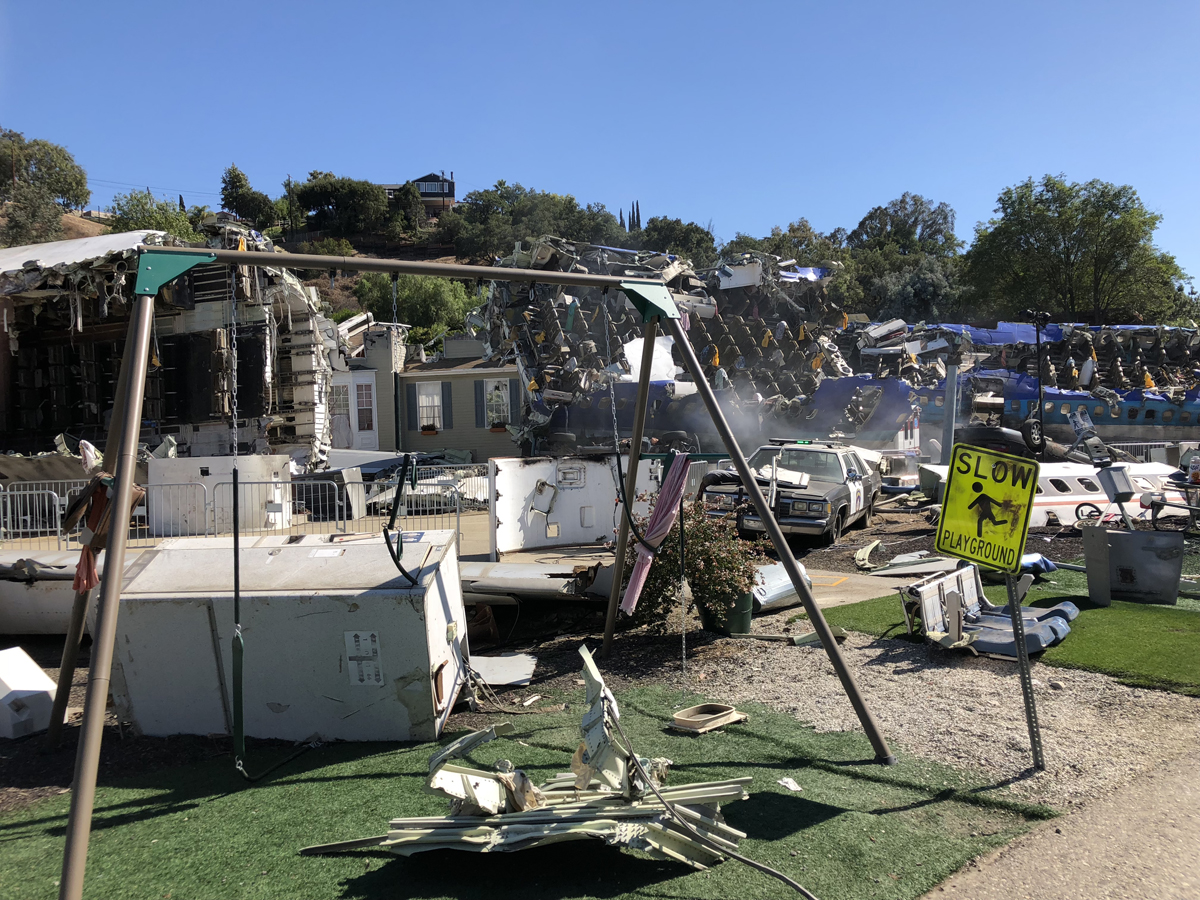 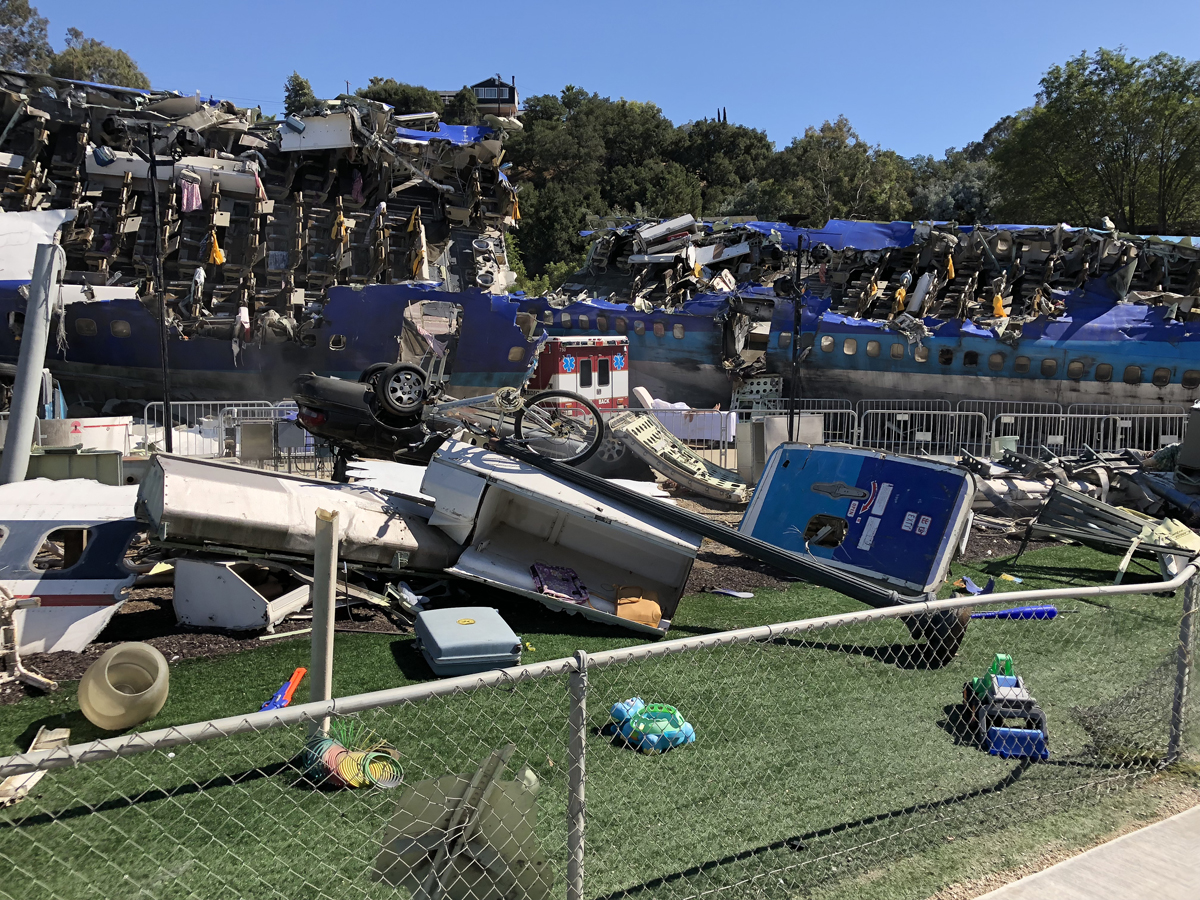 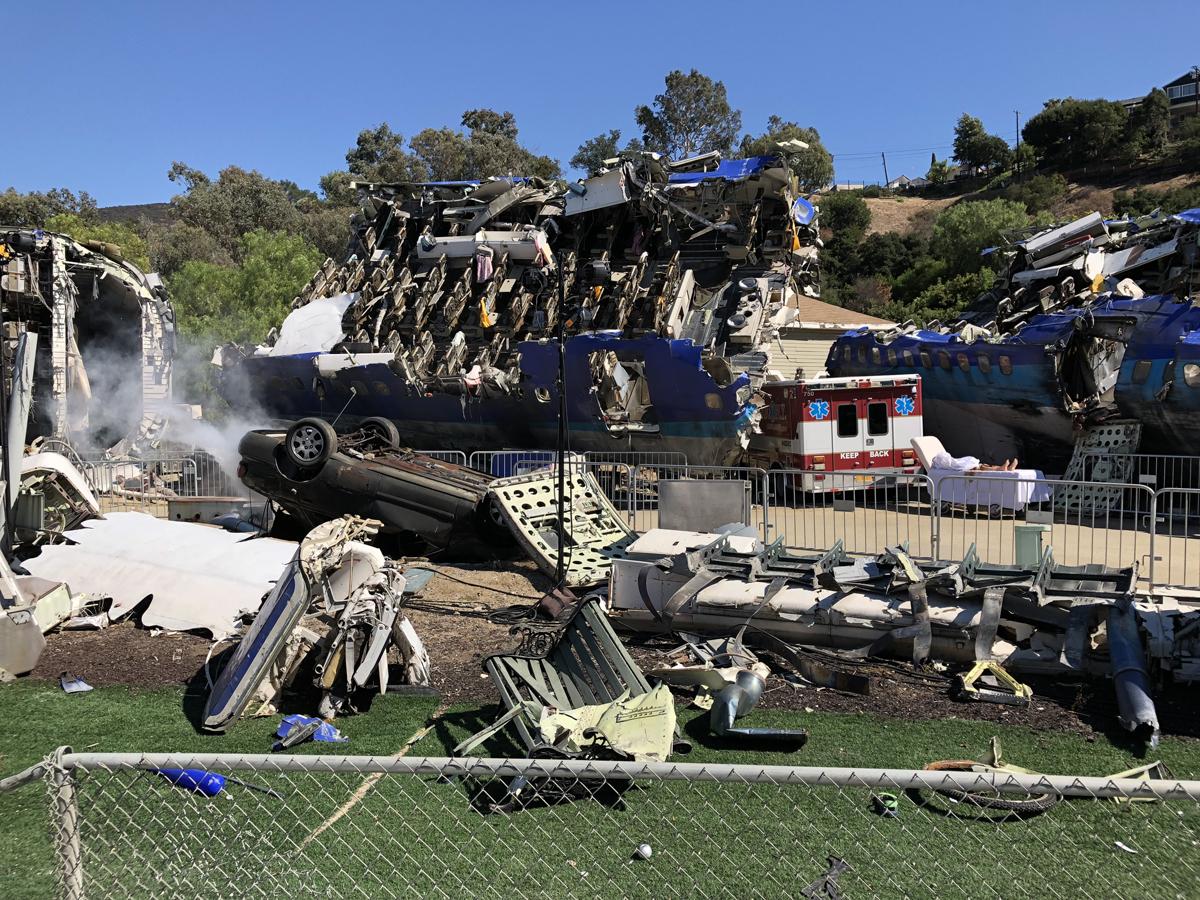 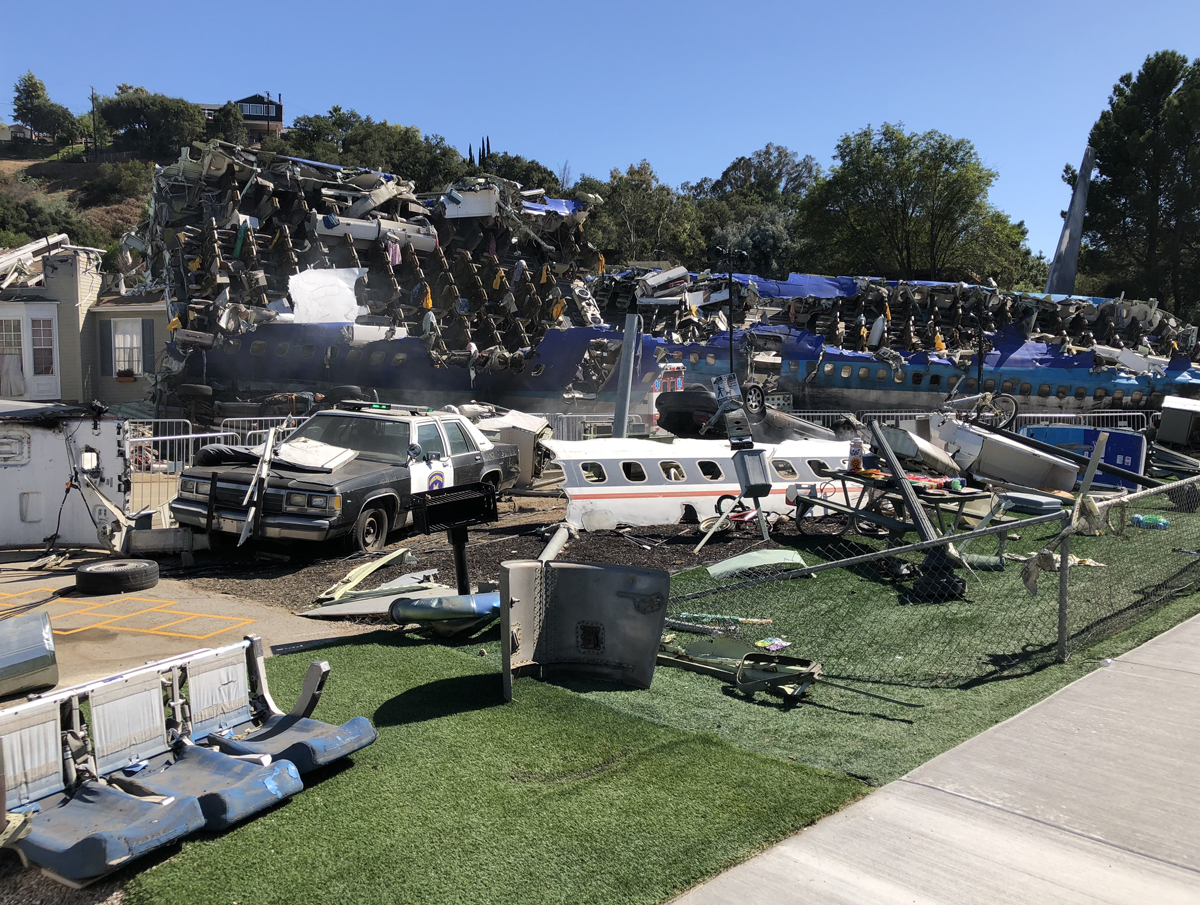 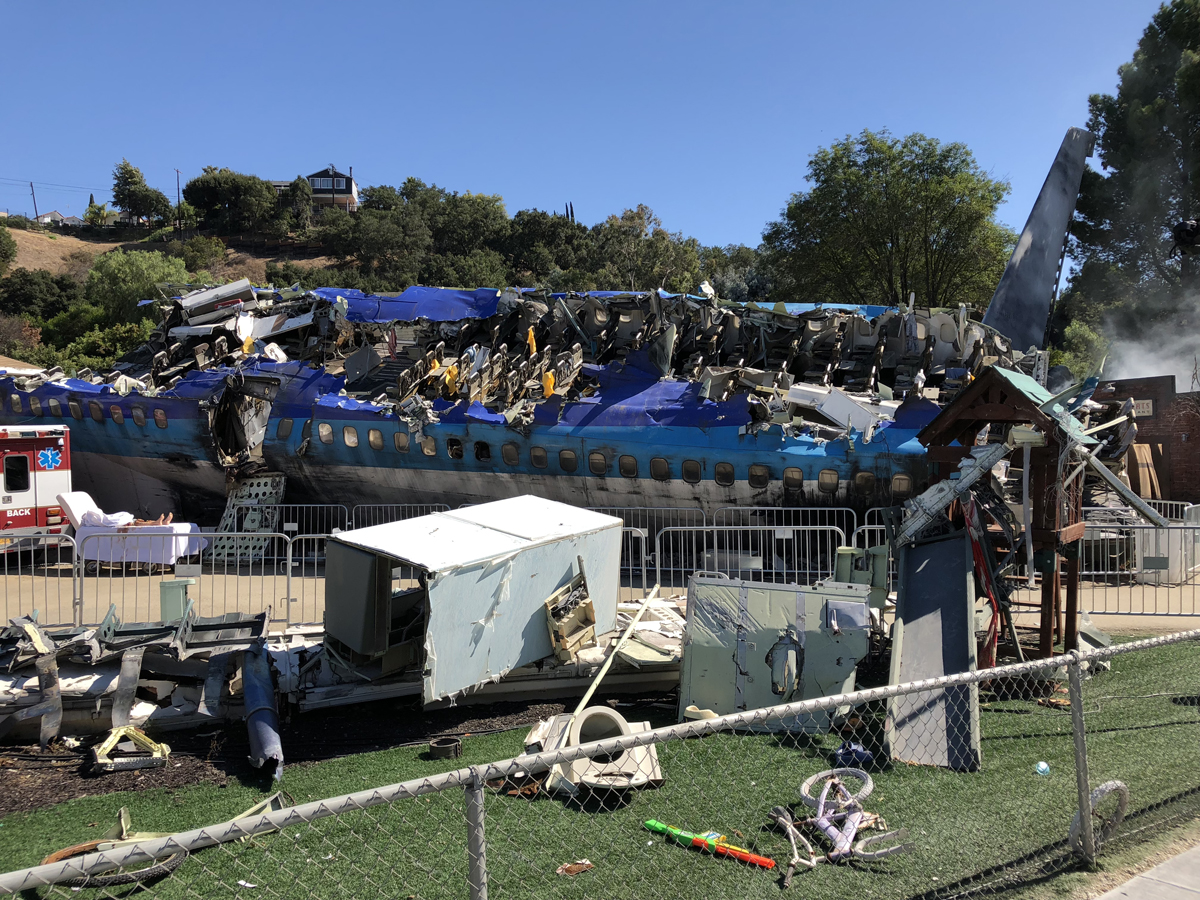 One tip for those perhaps not interested in paying the full price for admission into Universal Studios Hollywood, this set can actually be seen free of charge from a hilltop behind the studio.  Just head up to the 3400 block of Blair Dr in Los Angeles for a view of the crash set.  It’s obviously not as good as viewing it up close from ground level, but if you’ve got some time to spare, it’s still an interesting sight. 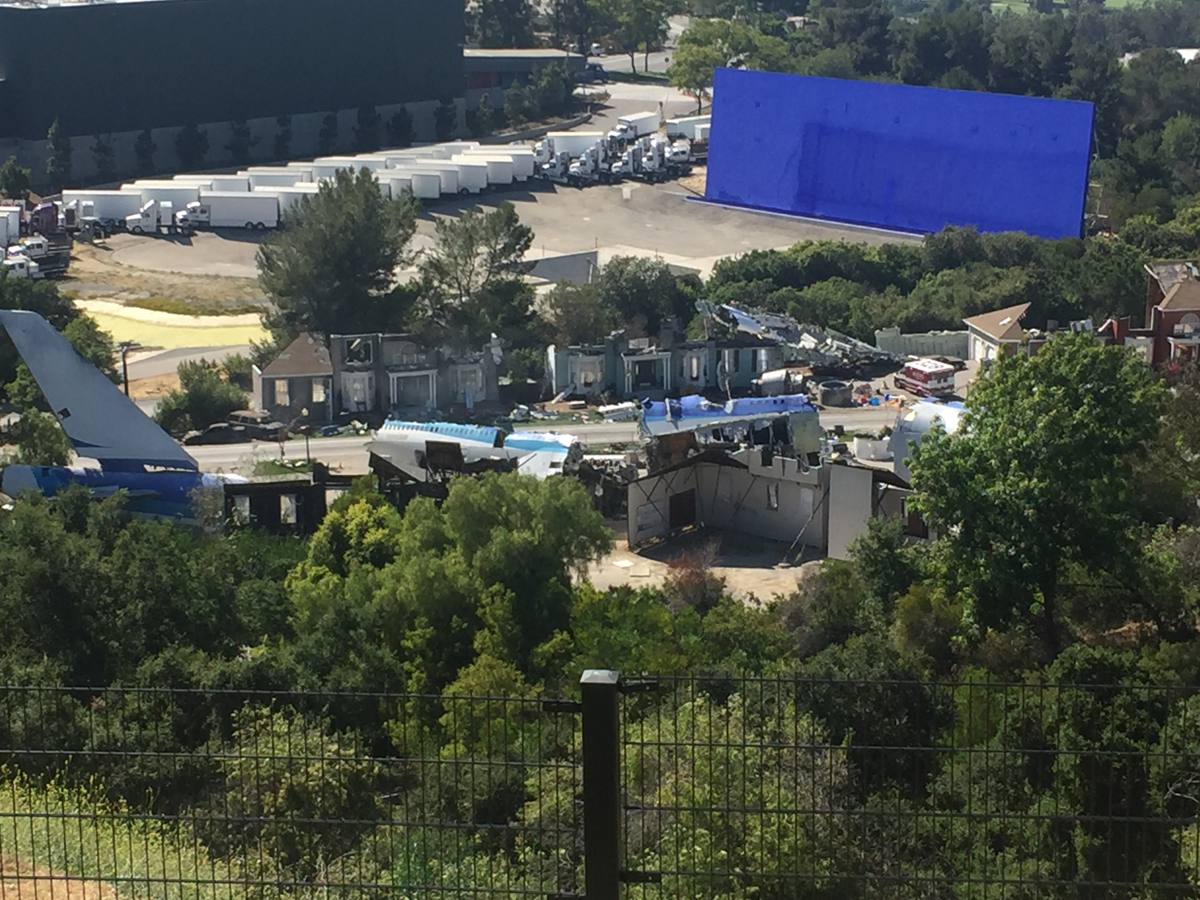 Paul Thomas Anderson’s 1999 film, “Magnolia,” named after a street that spans the San Fernando Valley, was shot mostly, as you might expect, around the Valley.  However, in the opening “coincidences” sequence, there is a memorable scene in which an attempted suicide becomes an accidental homicide.  That scene was shot at the Bryson Apartments in Los Angeles.  The same apartments were seen in the film “The Grifters.”

Officer Jim Kurring, played by John C. Reilly, investigates a crime scene at this apartment complex in North Hills.  As he walks back to his police car, he is approached by a young boy.

As the two stand on Burnet Ave, the boy performs a rap for him.

Linda, played by Julianne Moore, gets upset with a pharmacist after he insinuates she may be abusing the medications.  These scenes were filed at the A to Z Pharmacy in North Hollywood, although it is only seen from interior views in the film.

Donnie visits the Foxfire Room, located on the titular Magnolia Blvd in Valley Village.  In a slight bit of movie trickery, Donnie parks in the lot at the rear of the building, but is seen entering through the door facing the street on opposite side.

The Firefox Room is a staple of the San Fernando Valley and in the two decades since filming took place, it still looks nearly identical.  The bar opens at 7AM daily and it’s dark and inconspicuous.  Yet the staff is friendly and the vibe is welcoming.  Donnie enters through the door on the right.

Donnie sits at this corner booth.  The lighting in the bar is so dark, any brightness quickly overexposes a shot, so photography can be a challenge inside.

He sits and admires Brad the bartender.

Donnie then sits at the corner of the bar and talks to a mysterious older man, credited as Thurston Howell.

Officer Jim approaches the corner of this building, when shots are fired.

He then slides down this embankment on the side of the building.

As Jim is disoriented in the rain, a kid approaches and steals his gun, running up the stairs to escape undetected. While there are still stairs up to the street at the location, they have been remodeled since filming.

The police arrive to assist in the search for the gun, with the L.A. river and overpass visible next to the building.

Late in the film, as a biblical storm hits, Officer Jim finds himself at the intersection of Reseda Blvd and Sherman Way in Reseda.  This is located right beside the “Hot Traxx” night club from “Boogie Nights.”

He makes an emergency stop at a gas station, only see Donnie climbing on a pole, where he has just attempted to rob his workplace.  Donnie then falls to the ground.  The pole and payphone are both still standing at the location.

The two take shelter at the gas station.

The house where Tom Cruise famously danced in his underwear for the 1983 film “Risky Business” can be found in the city of Highland Park, Illinois, just north of Chicago. 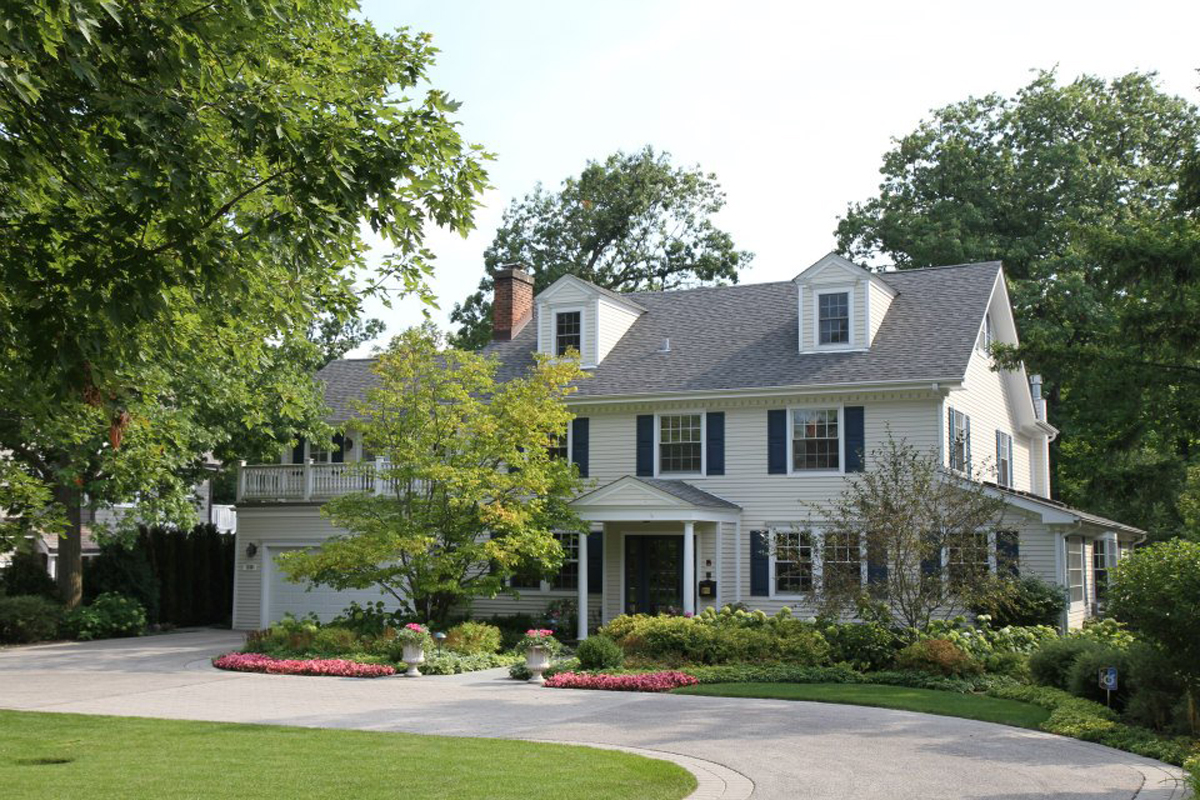