For those seeking out the filming locations of the 1991 film “My Girl,” prepare yourself for a lengthy journey.  While the film was set in Madison, Pennsylvania, it was shot mostly around Central Florida, with many of the locations scattered far apart from one another, tucked away in small towns.  To see the “My Girl” locations for yourself requires a lot of time and travel.

The Saltenfuss house, where Vada, played by Anna Chlumsky, lives with her father Harry, played by Dan Aykroyd, can be found in the town of Bartow, Florida.  For quite some time after the film, the property operated as a bed and breakfast.  Due to the property’s distance from major tourist destinations, however, it was unfortunately forced to shut down due to a lack of guest bookings.  It has since returned to being a private residence.  The house is very impressive and recognizable to how it appeared on screen, so if you have the time to venture to Bartow and are a fan of the film, it’s worth the journey. 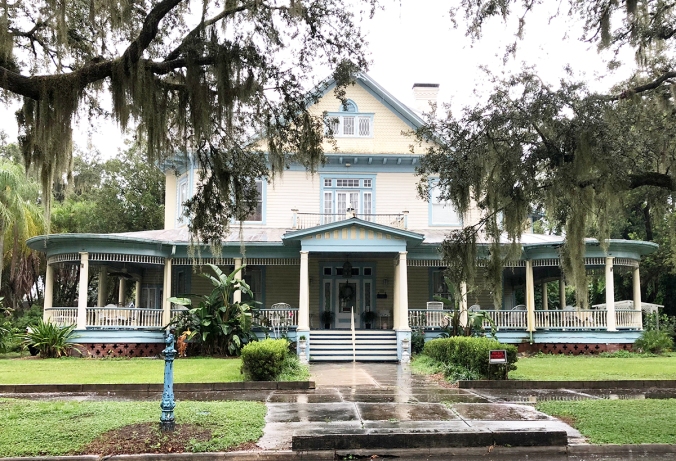 Shelly, played by Jamie Lee Curtis, pulls her RV up from around this corner in front of the house. 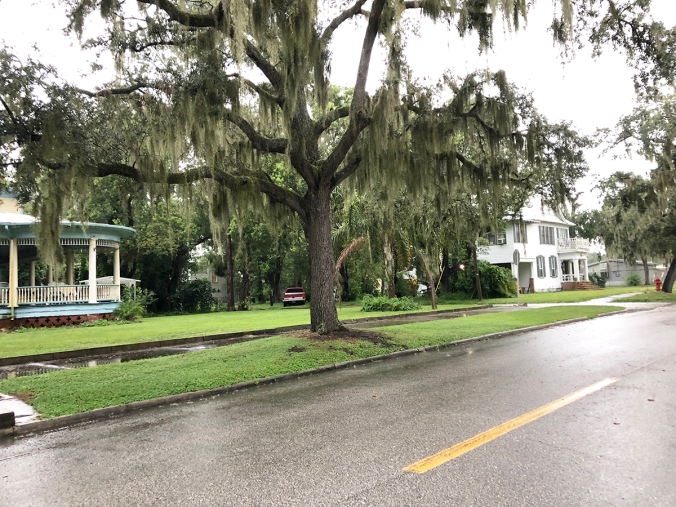 The main street where Veda and Thomas J., played by Macaulay Culkin, ride their bikes can be found in Sanford, Florida.  They can be seen crossing this road with the clock tower to the right, then riding down the sidewalk. 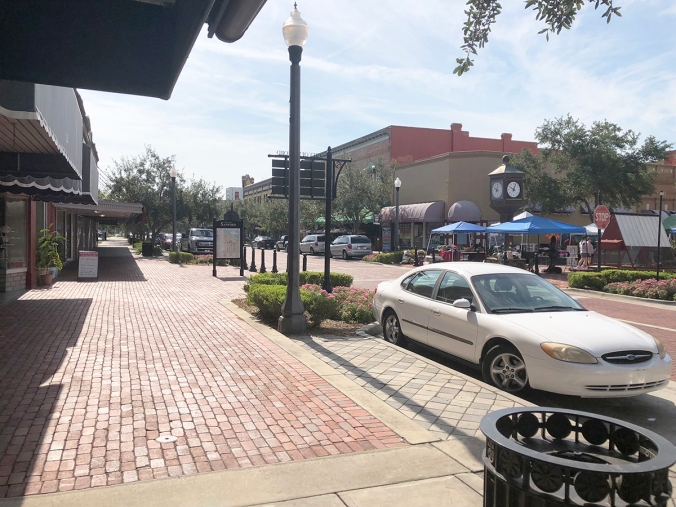 They then ride their bikes up a ramp that specifically says “no bicycles,” taking a short cut through a mechanic’s garage.  That building and ramp have since been demolished.  The alley they exit onto can still be found, however, where the garage owner yells at them as they ride away. 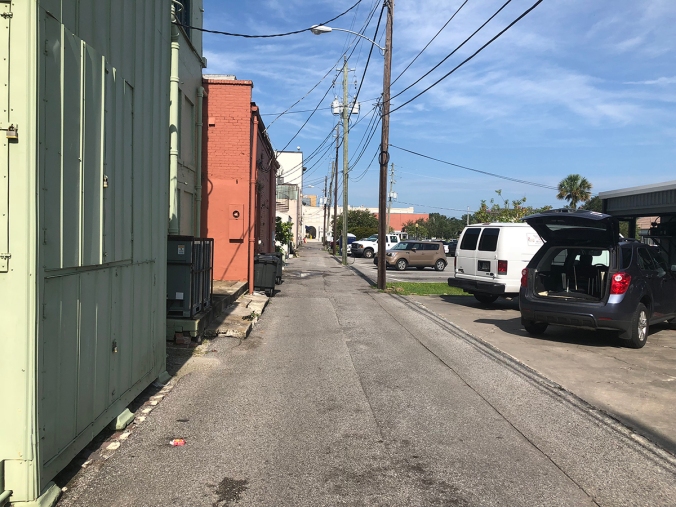 As they approach Dr. Welty’s office, they continue riding their bikes down another alley, which features a “Nixon / Agnew ’72” poster on the brick wall.  This alley really is just around the corner from the Dr. Welty’s office filming location. 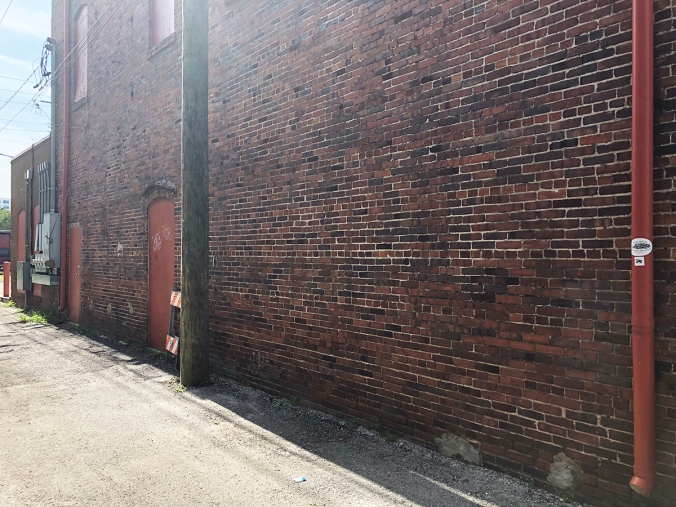 Vada visits Dr, Welty’s office, where, in spite of her claims that she’s sick, the doctor insists she’s in perfect health. 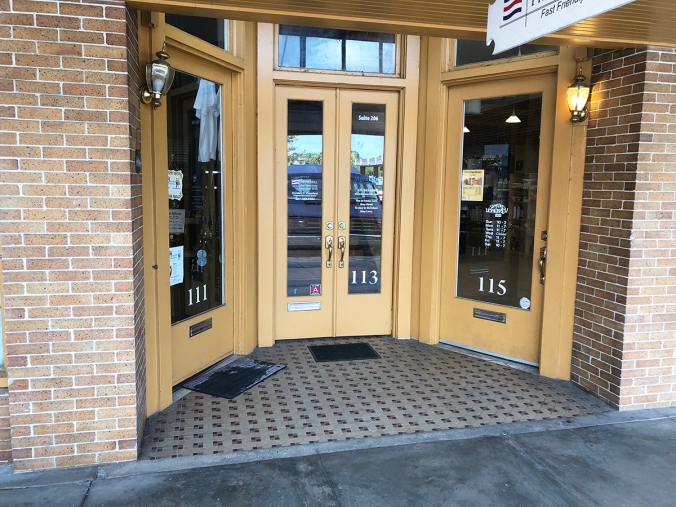 The kids then come across their school teacher, Mr. Bixler, played by Griffin Dunne, who is painting his house. 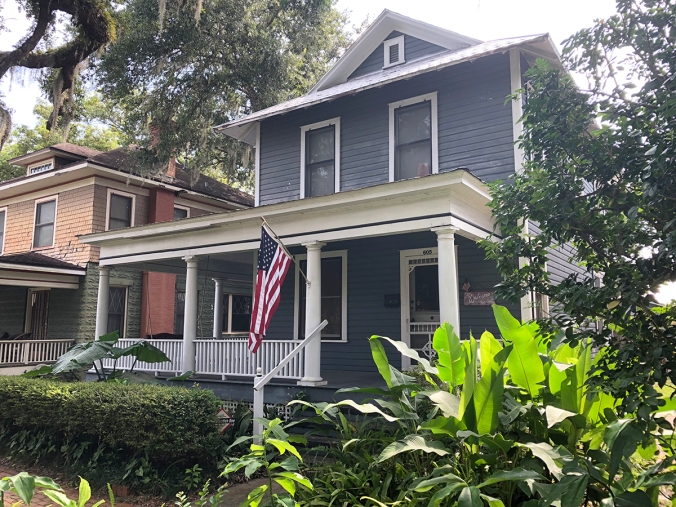 The tree where Vada and Thomas J. become “blood brothers” and later kiss in the film was a bit of movie magic.  It was, in fact, an artificial tree, built in part using pieces of a real tree.  After extensive location hunting for a willow tree beside a lake, the filmmakers failed to find what they were looking for and instead opted to make their own tree.  A team was hired to cut down a large oak tree, tagging each branch for reassembly, then uprooting it and moving it to the lake location.  The lake in question is Mirror Lake in Clermont, Florida, which is located somewhat far away from the other filming locations.  The base of the tree was held in place by five tons of cement, with metal coupling sleeves to reinforce the branches.  They then covered the entire thing with $15,000 worth of silk willow leaves to give you the tree you saw in the film, which appeared quite authentic.  Today all that remains is the metallic base of the tree.  The dock was there until a few years ago, when it was removed due to deterioration.

This portion of the lake is not open to the public and is not visible from the road.  However, the much of the surrounding land is currently up for sale, in an effort to develop more housing around the area.  So while an eventual sale of the property could open it up for easier visibility, there is always the possibility that developing the land could in turn lead to the removal of the tree base.  The reason it hasn’t already been removed is most likely due to the five tons of concrete beneath. 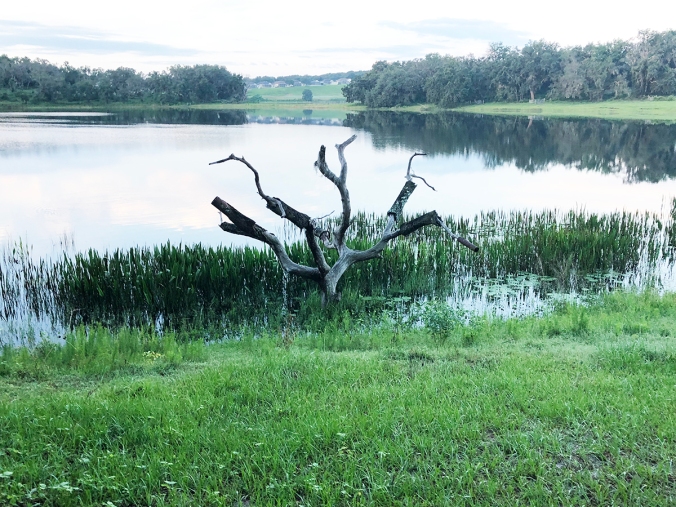 A bit closer look at the tree base. 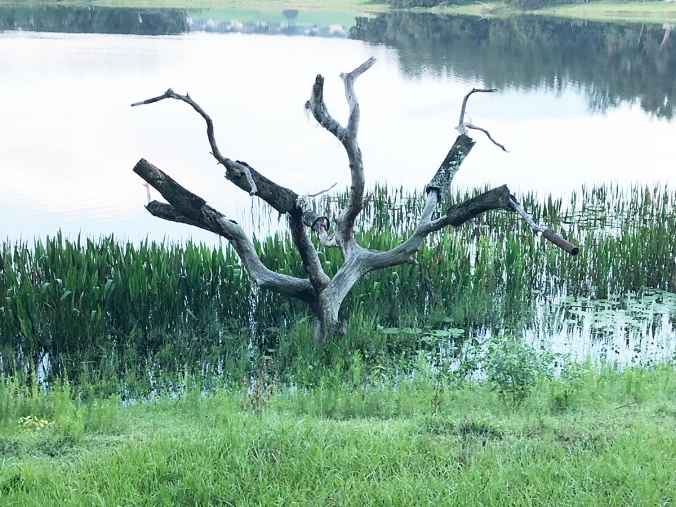 Vada sneaks over to Thomas J.’s house and asks him to go to the church with her to spy on her father’s date with Shelly. 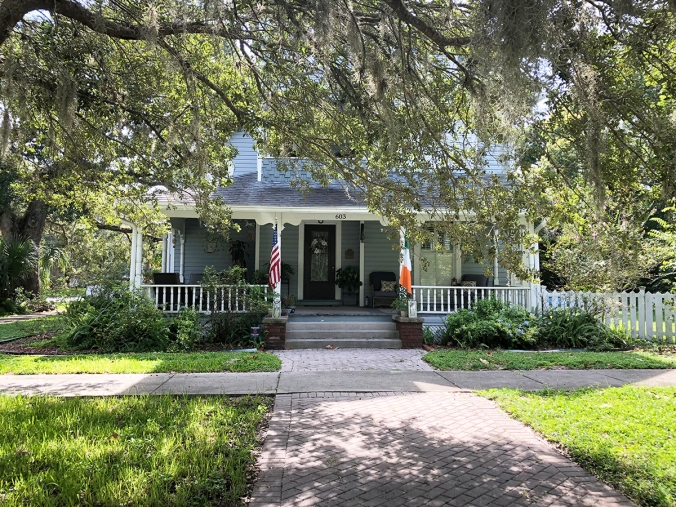 They church they head to is Ocoee Christian Church in Ocoee, Florida.  The kids can be seen walking down the sidewalk on the left and passing the front steps as they make their way over to the bingo tent.  Once again, Ocoee is not a short drive to get to and it’s somewhat puzzling why the filmmakers chose such a far-removed location, as surely there must have been other churches available that were closer to the other filming locations. 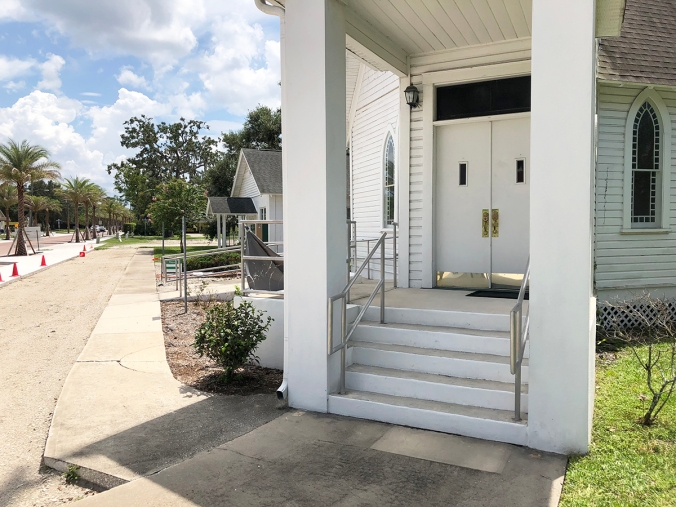 Here is the yard to the church, where the bingo tent was set up. 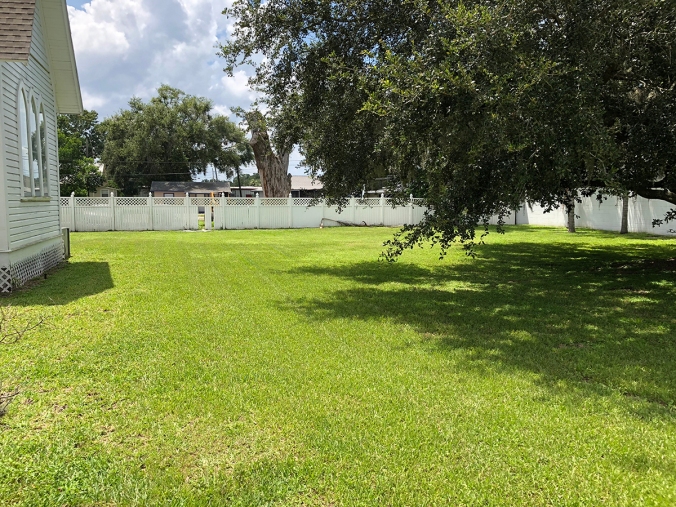 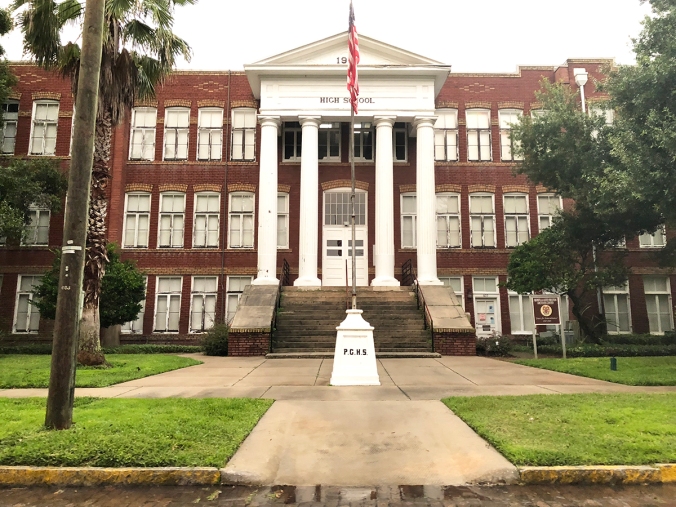 Back in Sanford, near the end of the film, Thomas J.’s mother runs into Harry at The Breezeway Restaurant & Bar, which is located right by the clock tower on the main street, where the kids are seen riding their bikes early in the film.  Harry is eating inside, when he comes out and speaks to her on this sidewalk at the corner. 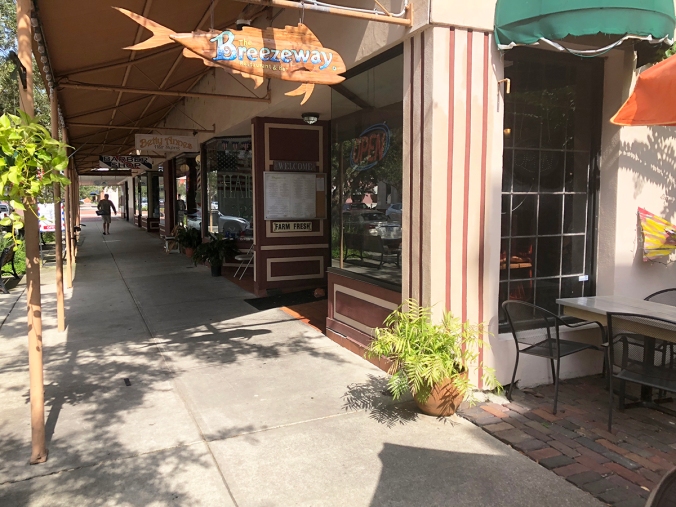 If you’re a fan of the film, the good news is most of the filming locations are still well preserved.  The biggest challenge, aside from the handful of locations found in the town of Sanford, is simply traveling to all of the towns distant from one another, which composite the small Pennsylvania town depicted in the film.

For the 1992 sequel “Home Alone 2: Lost In New York,” the entire, original cast and crew returned, as well as a location from the first film.  In the early scenes, the McCalister house is once again on display.  The famous home can be found in Winnetka, Illinois. 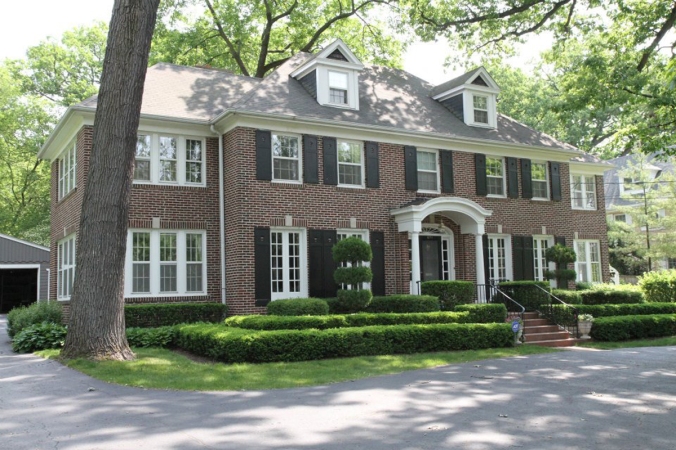 The bulk of the film, however, takes place in New York City this time around.  Upon arrival, Kevin takes in many of the city’s landmarks, including Radio City Music Hall. 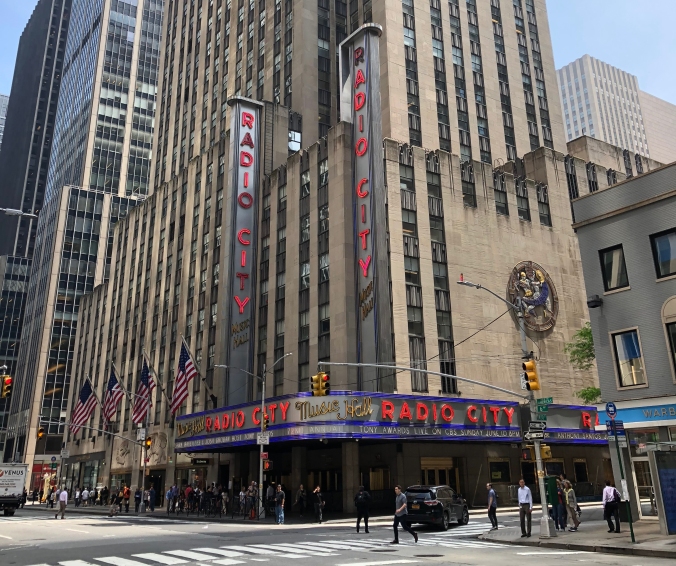 Later Kevin makes his way over to Central Park, where he first encounters the Pigeon Lady, a scary and mysterious woman covered in birds, who essentially serves the same role as Old Many Marley in the original film.  Kevin is initially frightened when he sees her feeding birds in front of Gapstow Bridge in Central Park, though the two eventually strike up a friendship. 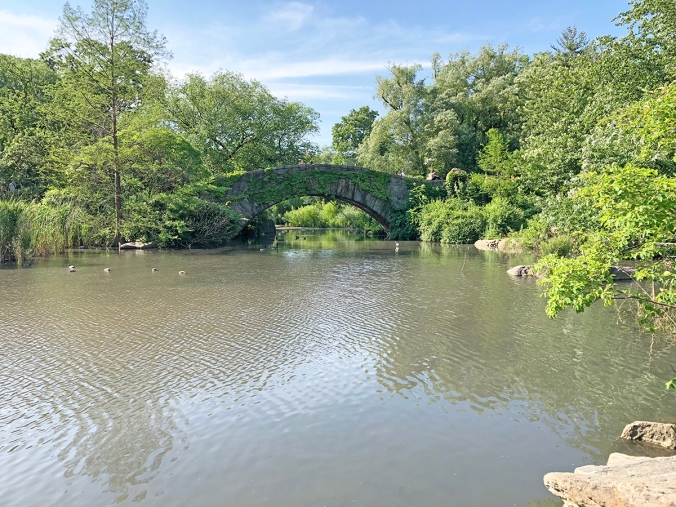 Very close to Gapstow Bridge is another major location in the film, the Plaza Hotel.  “Guests of the new ‘Celebrity Ding, Dang, Dong’ stay at the world-renowned Plaza Hotel, New York’s most exciting hotel experience.”  It is a real, well-known hotel in Manhattan, perched right above Central Park.  Here is a view of the hotel from the park. 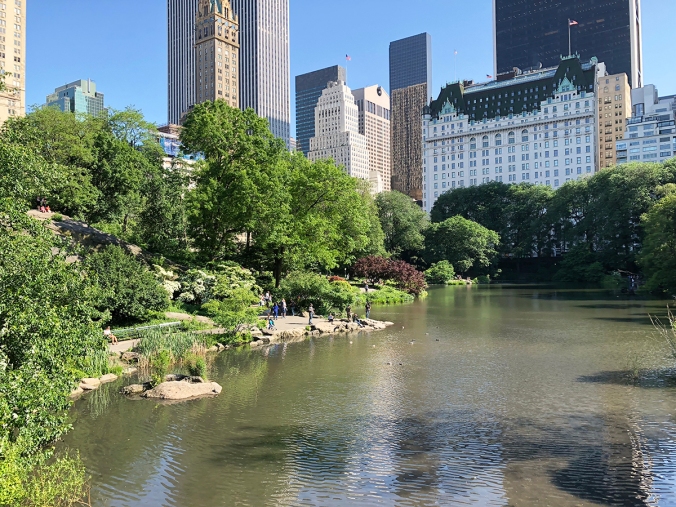 Later in the film, Kevin returns to Central Park at Bethesda Terrace and Fountain, where he flees from the Sticky Bandits.  The terrace is another famous New York landmark seen in countless films. 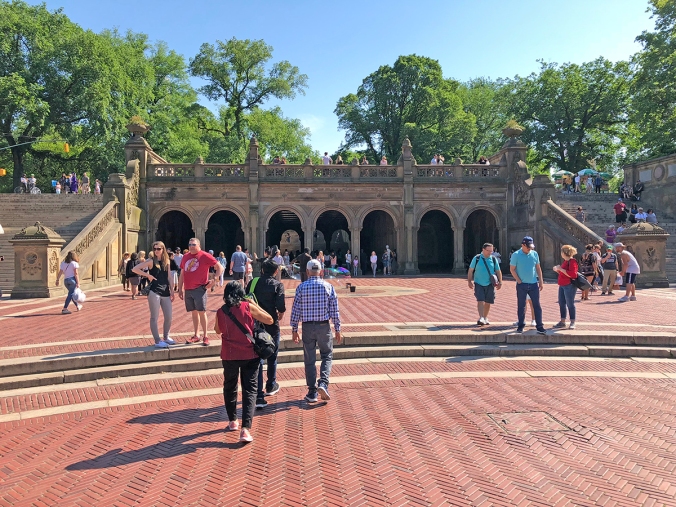 A reverse view of the fountain.  Here Kevin hides in the back of a carriage, narrowly escaping the bandits. 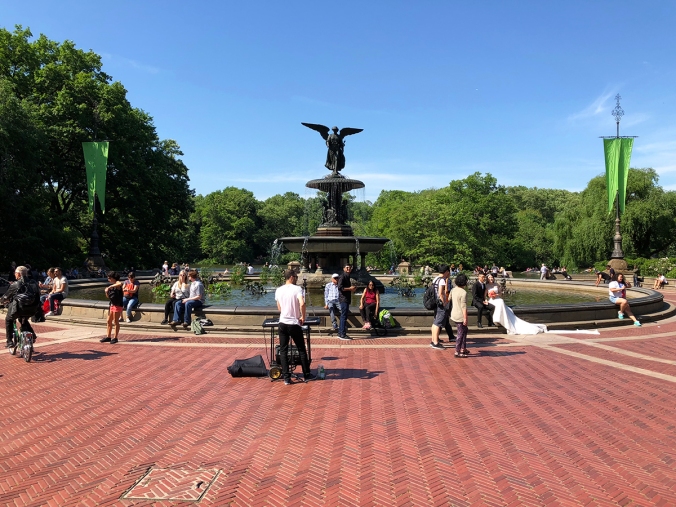 A couple other, notable locations from the film were actually sets.  Uncle Rob’s house, where Kevin once again wreaks havoc on the Sticky Bandits with homemade traps, was a set located on Brownstone Street on the backlot of Universal Studios Hollywood.  The street suffered a fire in 2008 and portions had to be rebuilt.

While made to resemble Central Park, the scene where the Pigeon Lady throws bird seeds all over the bandits, saving Kevin from harm’s way in the process, was also a set.

Near the end of the film, Kevin is finally reunited with his mother in front of Rockefeller Center. 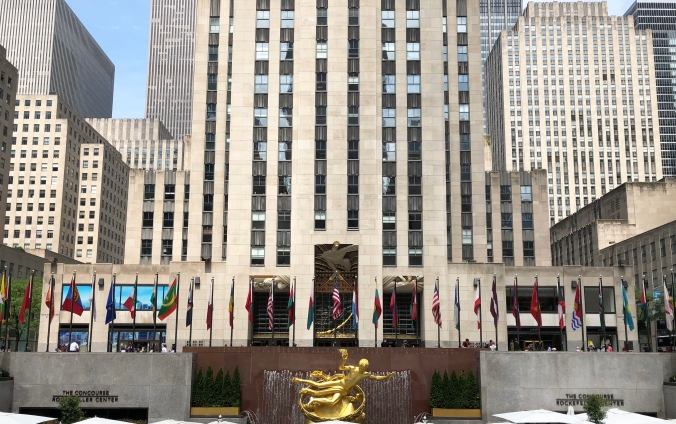 Some props from this film, as well as the first part, can be found on display at Planet Hollywood in Florida. 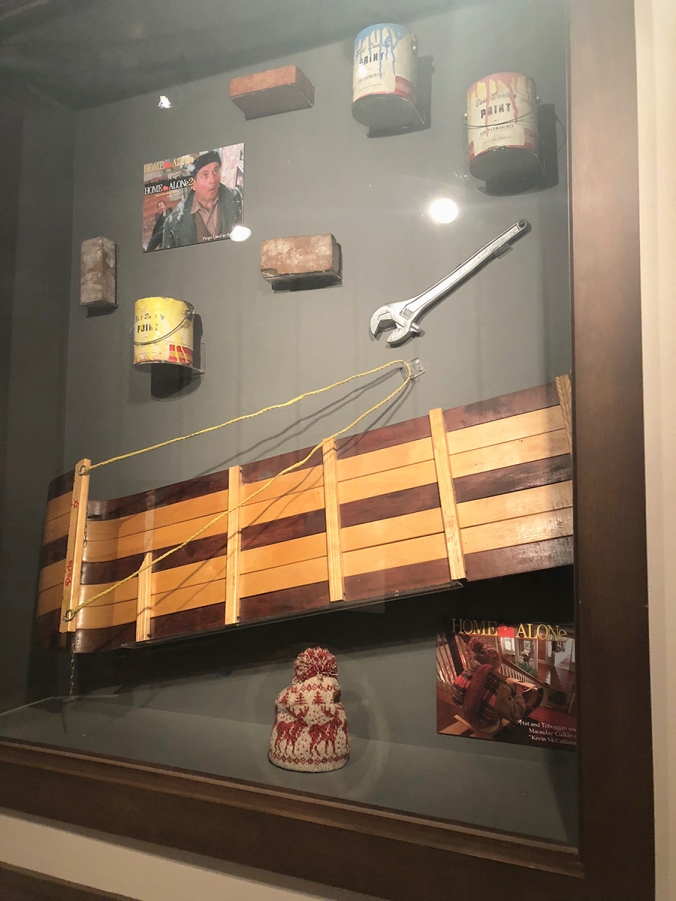 If there’s one location that should someday be converted into a tourist attraction, it would probably be the house from Home Alone.  A truly iconic film spot, it seems an exercise in futility to try to manage a private life at the residence, yet to this day, it does indeed remain private.  The house can be found in the quiet neighborhood of Winnetka, IL, a bit north of Chicago.

They left the garage door open, just like in the film. 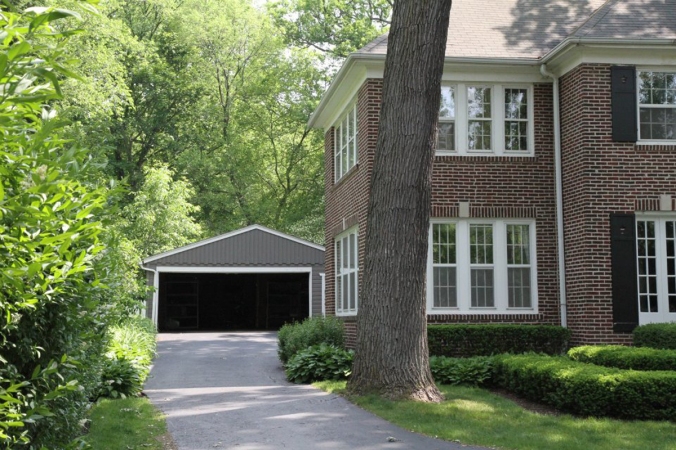 The church from the film can be found over in Wilmette, IL.  This is the Trinity United Methodist Church, which was used as the exterior location for the film.  The interior of the church was actually an entirely separate location; the Grace Episcopal Church (924 Lake St., Oak Park, IL 60301). 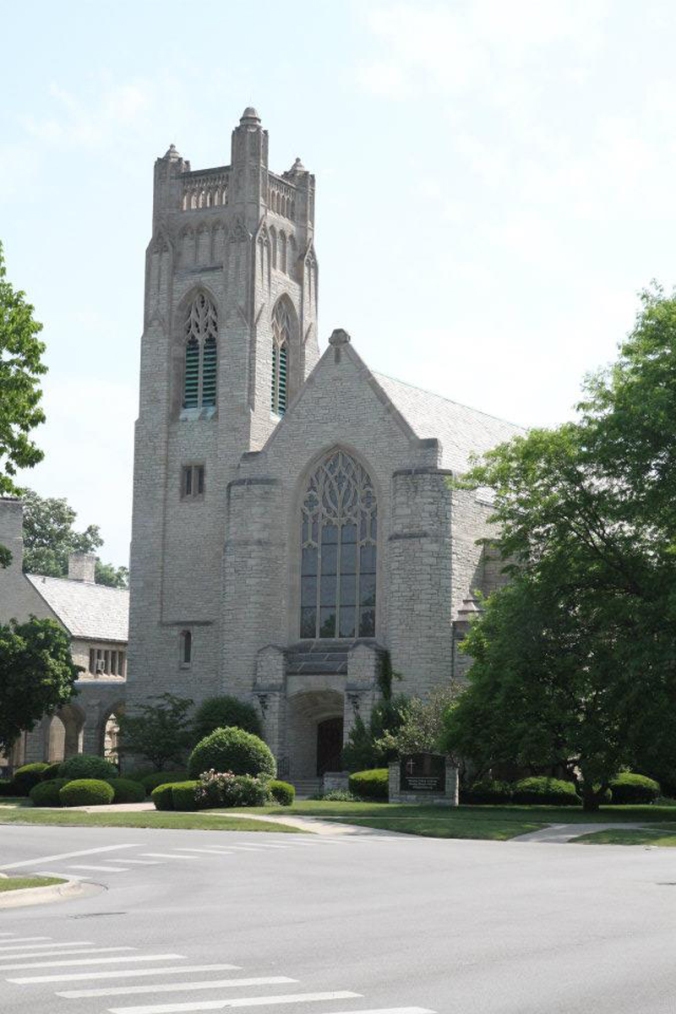 Some props from the film and it’s sequel can be found on display at Planet Hollywood in Florida.