While once used a movie set, Spahn Ranch is mostly remembered for it’s notorious connections with the Manson Family during the late 1960s.  It’s a unique and significant part of Californian and American history and we wanted to show it as it is today.

Located in Chatsworth, CA, about 30 miles north of Los Angeles near Simi Valley, you’ll find nothing more than empty land there these days.  The property is currently part of Santa Susana State Historic Park, which is owned by the state of California and open to the public.  Today, many joggers and bicyclists enjoy the scenic pass.  This is what the land looks like currently, as seen from Santa Susana Pass.

The property was once located at 1200 Santa Susana Pass Road, but that address has long since been retired.  Today, the location is most commonly identified by the large, rocky hill in the background.  There is a private road, which starts at a nearby gated entrance and runs behind the former ranch, along the foot of the rocky hill, which is not state property or open to the public.  That land belongs to the Rocky Peak Church, which also owns the land across the street.  As long as you do not go on the private road or up the rocky hill, the rest of the land, which includes the full area in which the ranch stood, is part of the state park and you are welcome to access it.  There is additional land down a steep embankment, which is not visible from the road, which is also part of the state park.

Another way to quickly spot the land is the Santa Susana State Park sign, which is located almost immediately in front of the former ranch.  If you’re looking to get there by using an address, the closest would be that of the Rocky Peak Church in Chatsworth.

If you visit the park, be sure not to not park anywhere on Santa Susana Pass, which has moderate to frequent traffic and does not allow parking.  Instead, parking is available nearby on Iverson Road.  You’ll see a large parking lot on the left on Iverson, which is property of the church and not available for public use.  Parking on the right shoulder of Iverson Road, however, is permissible and available to the public.

Before we get into what can be seen there today, we’ll first discuss the history of the land.  Santa Susana Pass began as a transportation trail between the settlements of Los Angeles and Santa Barbara.  By the 1860s, the trail had been expanded for the use of stage coaches.  In 1897, a settler by the name of James Williams staked his claim to a section the land, part of which would eventually become Spahn Ranch.  Silent film actor William S. Hart later bought the land and started using it to stable his horses, as well as using the ranch for movie productions, such as the David O. Selznick production, “Duel in the Sun,” which starred Gregory Peck, in 1946.  In 1948, the land was purchased by George Spahn.  Spahn looked to continue to utilize the property as a movie and TV location and further developed the buildings, adding prop storefront signs, such as the “Longhorn Saloon” and the “Rock City Cafe.”  Television series such as “Bonanza,”  “The Lone Ranger” and “Zorro” all filmed at the ranch.

With the steady decline of the western genre, by the late 1960s, productions at the ranch had likewise diminished, with mostly low-budget, exploitation flicks filming there.  Spahn began using the property primarily for families to take horseback rides around the nearby trails.  He also staffed a ranch crew and a variety of mechanics for repairing cars (which included future Manson Family member Steve “Clem” Grogan).  By 1967, the ranch had fallen into a state of disrepair.  Manson Family member Sandra Good knew some of the mechanics at Spahn Ranch and would occasionally visit the property, eventually bringing Charles Manson with her during one of these visits.  Manson immediately liked the site, due to it’s isolation, while still remaining adjacent to the greater population of Los Angeles County (the land is much closer to the freeways than you might expect).

By the time the Manson Family arrived at the ranch, George Spahn was 80 years old and blind.  With his property in disrepair, Manson offered to have his group maintain the ranch, in exchange for free living quarters, which Spahn accepted.  The Family then stole cars and would convert them into dune buggies, intending to take them to their other hideaway, Barker Ranch in Death Valley.  Some of the cars are actually still located near Spahn Ranch, a bit further down Santa Susana Pass, where they were pushed down a steep canyon after they’d been stripped for materials.

In the summer of 1969, things reached a fever pitch at Spahn Ranch.  The first significant step towards the Tate / LaBianca murders came when Manson Family member Charles “Tex” Watson arranged a drug deal with a pimp in Hollywood, only to rip him off.  The pimp, known as Lotsapapa, called Spahn Ranch looking for “Tex,” but instead was put on the phone with Charles Manson, who was unaware of the situation up to that point.  Lotsapapa threatened the Family and Watson’s girlfriend, which prompted Charles Manson to visit him in Hollywood, in an attempt to cool the situation.  However, the situation instead escalated at the meeting, with Manson ultimately shooting Lotsapapa.  Although Lotsapapa survived, Manson believed at the time that he had murdered him.  After seeing news on the TV of an unrelated murder of a member of the Black Panther party, Manson mistakenly believed this to be Lotsapapa.  Expecting retaliation from the Black Panthers, the Manson Family entered into a heightened state of paranoia and prepared for war at Spahn Ranch.

The next blow came when Bobby Beasoleil, a friend of the Family, murdered Gary Hinman.  Bobby had sold some drugs to local bikers, who in turn claimed the drugs were bad and demanded their money back.  Bobby had gotten the drugs from Gary Hinman, who insisted the bikers were lying and the drugs were good.  With Bobby demanding money and Hinman refusing, the situation escalated, with members of the Family holding Hinman hostage in his house.  Charles Manson paid a visit and threatened Hinman, slicing him with a sword.  With other members of the Family present, Bobby Beasoleil eventually murdered Hinman.  Soon after, Beasoleil was captured and arrested, which sent an already volatile Manson into further anger.

Just after the Beasoleil arrest, Manson Family members Sandra Good and Mary Brunner were also arrested for credit card fraud, after attempting to use stolen credit cards at a grocery store.  With dead bodies accumulating, members of the Manson Family in jail and Manson himself believing he was a murderer and that others would soon come for them, be it the Panthers, police or others, Manson became enraged and ordered the first night of murders, which became the Tate murders.  The women had suggested the murders be done to look like a copycat of the Hinman murder.  Believing the women would not successfully carry out plans by themselves, Manson ordered Charles “Tex” Watson to lead them, insisting Watson owed him for Lotsapopa.  It was at Spahn Ranch the murders were ordered and it was there the killers returned after the slayings.

Unhappy with the first night of murders, which Manson felt were not well-executed, he ordered a second night of random killings and went out himself, to show the others how it’s done.  This lead to the LaBianca murders, although after he tied up the victims himself, Manson would leave back to Spahn Ranch, ordering the others to handle the killings instead.

Soon after, Spahn Ranch was raided by police, but not for the murders, which the police hadn’t yet connected to the Family.  Instead it was for a car theft ring.  Manson and others were all arrested at Spahn Ranch.  However, all charges were later dropped after a clerical error on the date on the police warrant invalidated their raid and arrests.  The Family then fled to Barker Ranch in Death Valley, where they were ultimately captured.

From here, we will cover a bit of what can be seen at the land today.  First up is a view of the land where the ranch buildings used to stand.  The entire area is much smaller than most people might expect.  You can see the tree tops here, stemming up from the lower embankment, behind where the buildings once stood.

Here is a reverse view towards the street of Santa Susana Pass.  The view of the road is obscured by overgrowth.  It was towards the left where Manson Family member Susan Atkins posed barefoot on her toes in a pair of bell-bottom jeans, standing in the driveway near the mailbox at Spahn Ranch, for a well-known photograph.  The famous photographs of the ranch itself were also taken from atop those rocks across the street.

Towards the left side of the land (right if you’re facing the road), you’ll find the last remaining artifact of the original ranch.  A wildfire in 1970 burnt down all of the buildings, but remnants of the telephone pole survived the fires and it still stands today, albeit somewhat hidden in the brush.

On the right side of where the ranch stood, you’ll find a trail, which leads down the embankment to the area behind the ranch.  Be sure to wear proper clothing if you visit, as there is a lot of poison oak in the area, as well as possible rattlesnakes.  Just keep a keen eye as you walk and these things can be avoided.  As you make your way towards the lower area, you’ll come across this open area, where the 1969 exploitation film “The Ramrodder” shot scenes.  The cast of the film included Bobby Beausoleil, as well as Manson Family member Catherine “Gypsy” Share.

Once you’ve reached the bottom of the lower embankment, the first thing you’ll see on your left is the location of the most famous photo of the Manson Family.  Several Family members gathered under this small cave rock for a photograph for Life Magazine.  As you see in the photo, the cave occasionally gets tagged with graffiti, but park rangers are usually quick to clean it off.

Just ahead on the right, you’ll see another location where members of the Family posed for Life Magazine, between these two trees, where a hammock was draped.

Charles Manson used to sit and play guitar on the large rock seen in the next photo.  The rock has since been partially destroyed.  It was here that Manson performed his audition for Terry Melcher.

There are many trees throughout the lower area, which are littered with bullet holes, where Charles “Tex” Watson and Charles Manson practiced firing guns. 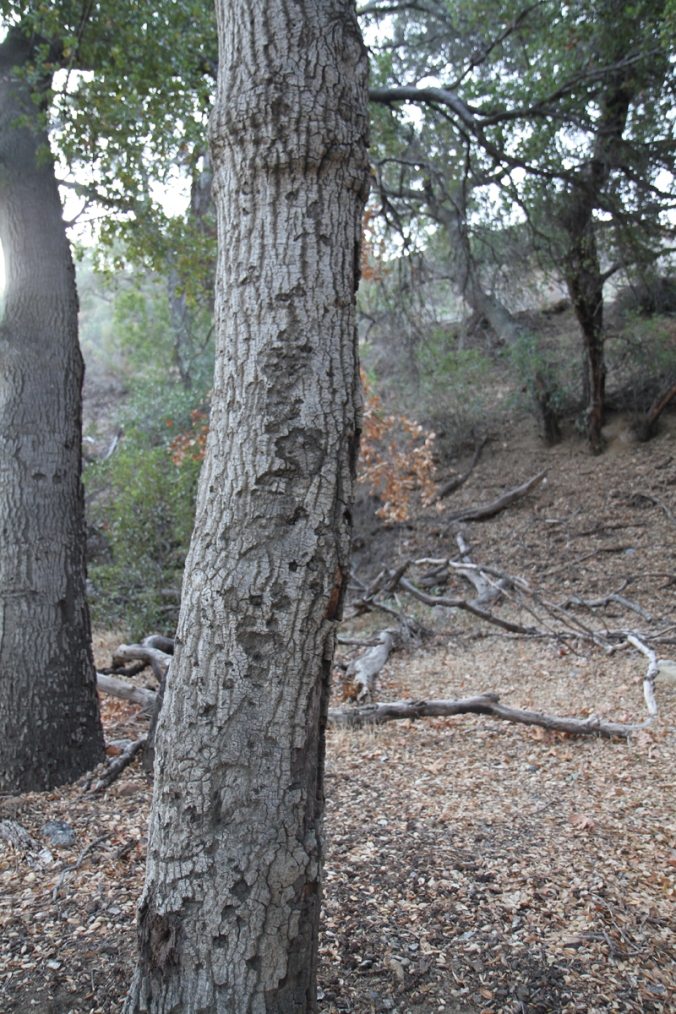 There are, of course, many more sights to be found here, the deeper you dig into the history of the place.  Countless books have been written about it.  Out intention here is not a comprehensive breakdown, rather a broad overview.  If you’d like to see footage of the ranch from when the Manson Family lived there, we recommend the Robert Hendrickson documentary “Manson,” which was nominated for an Academy Award, as well as his sister documentary, “Inside the Manson Gang,” which is mostly comprised of unused footage from the first film.  If you’re considering a visit to the area, just be prepared by dressing appropriately and bringing plenty of water.  You’ll find it mostly calm and quiet today, but there is obviously a great deal of infamy surrounding the area, so it’s not for everyone.  We simply aim to acknowledge what happened here and show it as it is.