The 1988 Garry Marshall film “Beaches” filmed at Cottage 13 at Crystal Cove State Park in Newport Beach.  The cottage looks a bit different now than how it appeared back then, but there is still some resemblance.

Parking is tricky in this area.  While you can drop off and pick up fairly close to the beach, the closest proper parking lot (the Los Trancos Parking Lot) is across the street and charges a fee.  You’ll have to walk the rest of the way or wait for a shuttle, which also charges a fee.  There’s no exact address to the cottage, but some GPS systems do identify it as the “Beaches Film & Media Center.”  It’s the last cottage at the end, past The Beachcomber restaurant.

Crystal Cove kindly honors their film history with a sign marking it as the cottage from the movie.  There a film museum inside, celebrating not only “Beaches,” but many other productions at the beach, which date all the way back to the silent era. 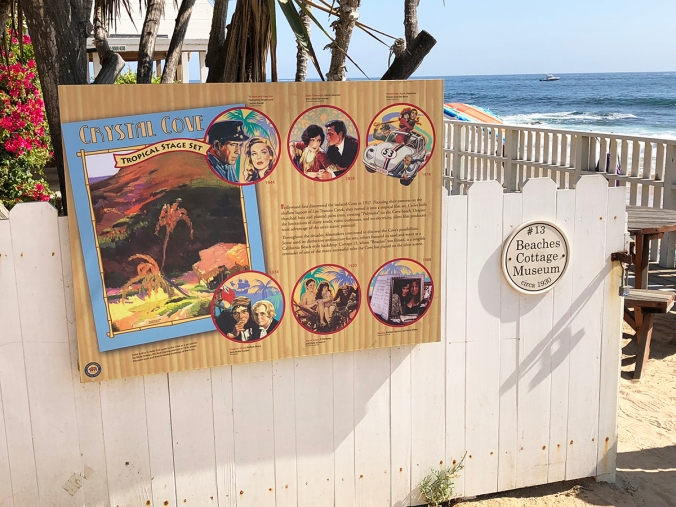 The cottage is owned by the State of California and is completely open to the public.

The titular “Birdcage Club” in the 1996 comedy “The Birdcage,” starring Robin Williams, Gene Hackman and Nathan Lane, can be found along the famous Ocean Dr in Miami Beach.  The real building is actually known as “The Carlyle.”

The tower where the woman falls to her death in the opening of the 1987’s “Lethal Weapon” was filmed at the International Tower Condos in Long Beach, California. 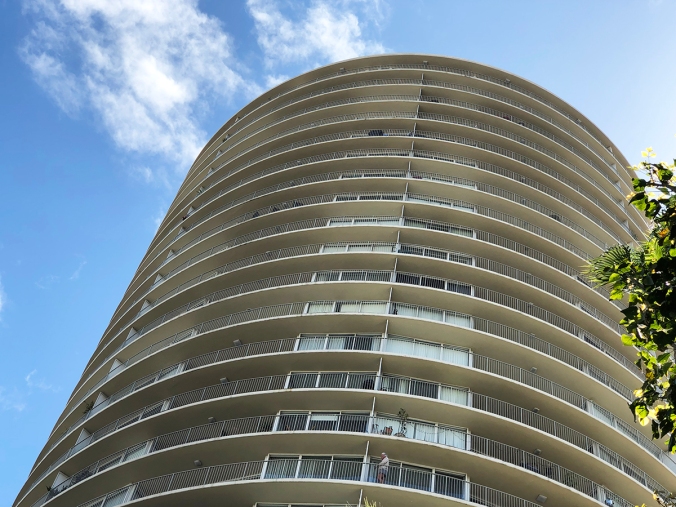 Roger Murtaugh, played by Danny Glover, shows up in front of the same tower to investigate.  The Villa Riviera condos can be seen in the distance.

Murtaugh’s house, seen in much of the film, is not a real house.  It’s a set on the Warner Bros. Ranch in Burbank, California.  The ranch is offsite from the main Warner Studio lot and is unfortunately not available for public tours.  The house has been used in countless productions, including the home of the Griswold’s angry neighbors in “National Lampoon’s Christmas Vacation,” the Colonel’s house in “American Beauty” and many, many more.  It has the most complete interiors of any set on the ranch, much of which was seen in the film.

The building where Martin Riggs, played by Mel Gibson, uses his unique methods to neutralize a potential suicide jumper was filmed at the Emser Tile building in West Hollywood.

Riggs and Murtaugh grab hotdogs at the corner of Western Ave and Wilshire Blvd, with The Wiltern music venue in the background. 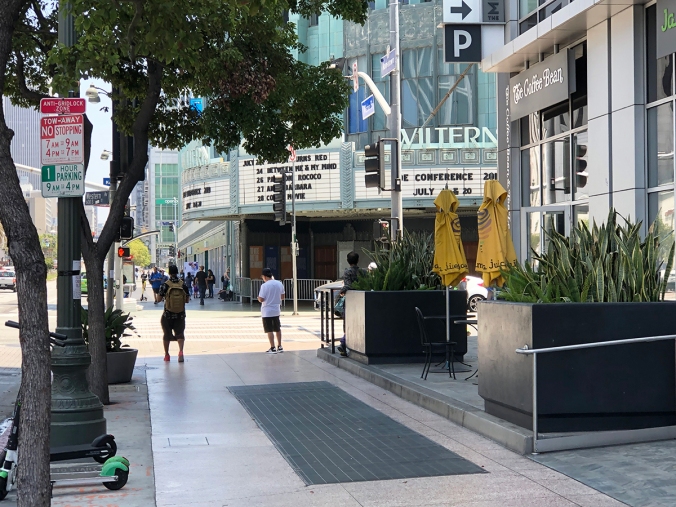 Much of the 1994 film “Color of Night” takes place at a mansion belonging to Bob, played by Scott Bakula, but which is occupied by Bill, played by Bruce Willis, for the majority of the film.  The house is known as the Circles on the Point mansion and can be found directly across from Point Dume in Malibu, California.

The mansion has appeared in several other productions, including the TV series “GLOW” and “Jean-Claude Van Johnson,” as well as the low-budget 2000 drama “Ritual.”  It is also worth noting that the house of Tony Stark in the “Iron Man” films, while a CGI creation, was superimposed to be located at Point Dume, which is directly across the street from this home, making it the closest actual residence Stark’s fictional home.

Here is the driveway to the house, which is seen several times in the film, including when Bill opens the mailbox to discover a rattlesnake inside.  It’s no longer the same mailbox, as the one seen in the film was built into a rock, but it’s located in the same area.

Here is a view of the front of the house.  The circular opening on the left is where arguably the most famous scene from the film takes place; Bill’s sex scene with Rose, played by Jane March.  The camera pulls back through the opening as the two fall into the pool.  The pool is the same one shown in the film, but is not visible from the street.

Point Dume is directly across the street, which is also seen in the film, when Bill and Bob ride their bikes up the trail. 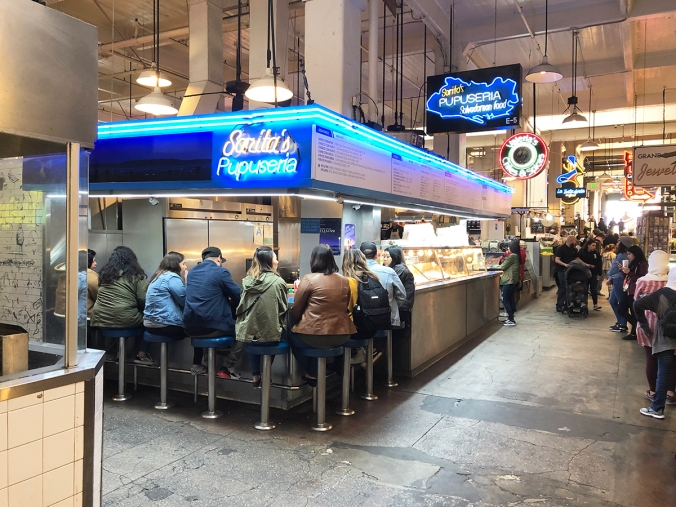 Bill visits Casey and climbs the fire escape to enter this building.  It is perhaps most famously know and the location of Paddy’s Pub from “It’s Always Sunny In Philadelphia,” although the view on that show is from Palmetto St and the angle seen here is from Mateo St.

Oliver Stone’s 1994 film “Natural Born Killers” was filmed in quite a few different locations, including Arizona, New Mexico, Illinois and Indiana, as the story depicts two killers on a cross-country mass murder spree.

In the opening scenes of the film, Micky and Mallory, played by Woody Harrelson and Juliette Lewis respectively, visit a restaurant on a desert road known as the “5 To 2 Cafe.”  After some unwanted advances and rude remarks from some locals, things quickly turn violent.

The building still stands all these years later, although it is long since boarded up and closed down.  The former diner can be found on AZ-99, along an isolated stretch on the outskirts of Winslow, Arizona.  To visit in person, it feels quite remote.  However, in reality, it’s only a few miles from Interstate 40, between the highway and the town of Leupp.  The exact location of the building is 35°06’54.8″N, 110°52’20.3″W.

The property is fenced off from the sides and there is a residence next door, so be careful not to trespass or disturb the tenants. 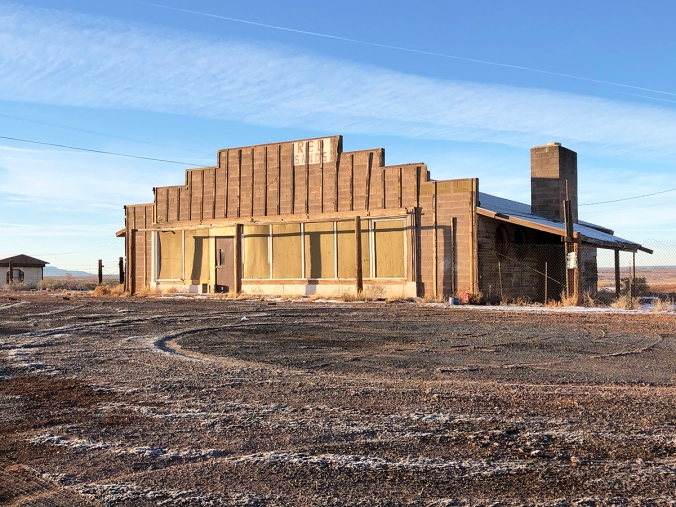 These distinct circular windows can still be seen on the sides of the building.  The windows are seen in the film behind Juliette Lewis, as she dances in front of the jukebox.

The overheating truck pulls up in front. 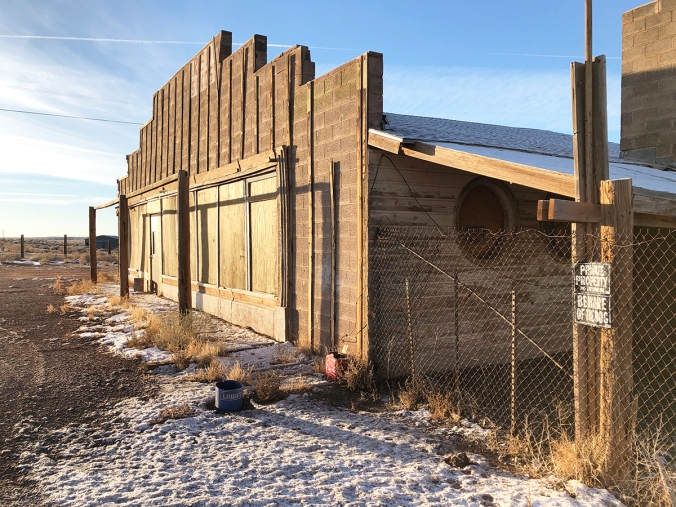 For those wondering, the “5 To 2 Cafe” sign out front near the road is long since gone.

Later in the film, Micky and Mallory are finally captured at the “Drug Zone” after being bitten by rattlesnakes and in need of medicine.  The building is currently a crafts store and can be found in Albuquerque, New Mexico.  Aside from the sign and some changes to the front entrance, the building otherwise still resembles how it appeared in the film.

A standoff between Micky and the cops ensues out front and after surrendering, Micky is then beaten by the police, as they try to prevent a film crew from capturing it.

Here’s a look from inside the store, in the general area where Micky exits and surrenders.

David Fincher’s 1995 thriller “Seven” filmed primarily in downtown Los Angeles, against muted color tones and an onslaught of rain towers.  Detective Mills, played by Brad Pitt, first meets Detective Somerset, played by Morgan Freeman, at a murder scene in the Flower District of downtown.  As they exit the building, Somerset invites Mills for a drink, but is promptly declined.  The two walk along the building as they continue talking.

The pair are introduced to the seven deadly sin killings with the “Gluttony” murder scene, filmed in the Westlake neighborhood of Los Angeles.

They make their way across a then-vacant lot, along the side of the property to a rear entrance.

Somerset researches the seven deadly sins at the city library.  This was filmed at the A.G. Bartlett Building in downtown Los Angeles.  The building is currently used for a variety of businesses and lofts.  The property has been seen in countless other films, including “They Live” “The Mask,” “The Prestige,” “Ghost,” “Bridesmaids” and many more.  This area cannot normally be accessed by pedestrians.  However, it is still visible from the street in a couple areas through the windows.

Mills runs across the street in the rain to his car, parked across from this ramp to the Millennium Biltmore Hotel on S Grand Ave.  Lady Gaga walks up the same ramp in the opening of “A Star Is Born” and it can also be seen from the opposite view on S Olive St in the film “Chinatown.”

Thinking they’ve located the killer, the police raid leads instead to the discovery of the “Sloth” victim at the former Pan American Building, now known as the Pan American Lofts.  The building had a distinctive “Giant Penny Store” sign along the bottom, which is now gone.  However, much of the architecture otherwise remains the same.  The shots seen in the film are actually from the side of the building on W 3rd St.

Tracy asks Somerset to meet her at a diner, which was the former Quality Cafe in downtown.  The diner was a one-time staple of films, appearing in “Training Day,” “Ghost World,” “Catch Me If You Can,” “Million Dollar Baby” and dozens more.  However, it was not an actual restaurant open to the public.  Instead it was used solely for filming (much like Johnie’s Coffee Shop in mid-town L.A.).  Unless the building was being set up for a production, most of the time it was closed up and locked by a large metal door covering the front windows.  So catching a glimpse of it was rare.

Sadly, it ceased to function as a filming location and was completely renovated in 2014.  The property no longer bears any resemblance to how it appeared in so many films.

Later in the film, Somerset emerges from this doorway of Chester Williams Building.

The fictitious Wild Bill’s Leather could be found on E 6th St in downtown Los Angeles, next to the Nite Owl from “L.A. Confidential” and across the street from where Forrest and Lieutenant Dan celebrate New Year’s in “Forrest Gump.”

The police station was a composite of a few different buildings, but the exterior can be found on Mateo St.

The film’s infamous ending was shot in Lancaster.  While there are quite a few electrical towers out there, it’s not as dense as what’s seen in the film, indicating some use of visual effects.

Much of the 1995 Martin Scorsese film “Casino” was filmed in Las Vegas, Nevada, as you might imagine.  The house where Ace, played by Robert De Niro, lives can be found in the Paradise Palms neighborhood.  A real casino owner did at one time live in the home and once was even targeted for attack by a car bomb.  However, it is not the same man De Niro’s character is based on in the film.  Former rap mogul Suge Knight is also said to have owned the house at one time.

The Sparta Police Station from the television series “In the Heat of the Night” can be found in Covington, Georgia.  The building is located next to the Covington town square, sometimes referred to as the “Hollywood of the South,” where countless other productions have been shot, including “The Dukes of Hazzard,” “Cannonball Run,” Rob Zombie’s “Halloween II” and many more.  This same building was also used as the Forest Green County Sheriff Department in “Friday the 13th Part VI: Jason Lives.” 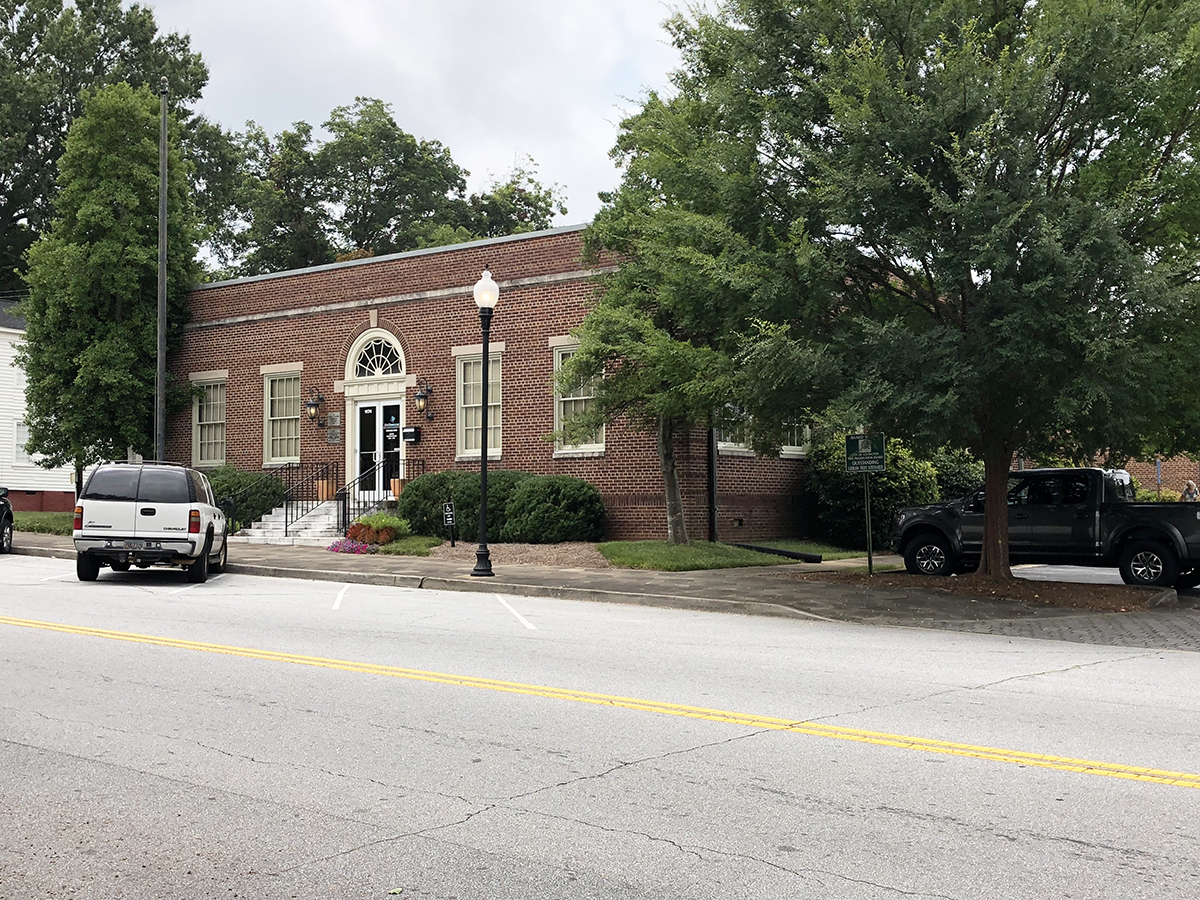 Here is a paver for the show.  Covington places these in the sidewalks as their version of a walk of fame, celebrating the shows and stars who have filmed there.  There are also pavers for actors Carrol O’Connor and Alan Autry from the show. 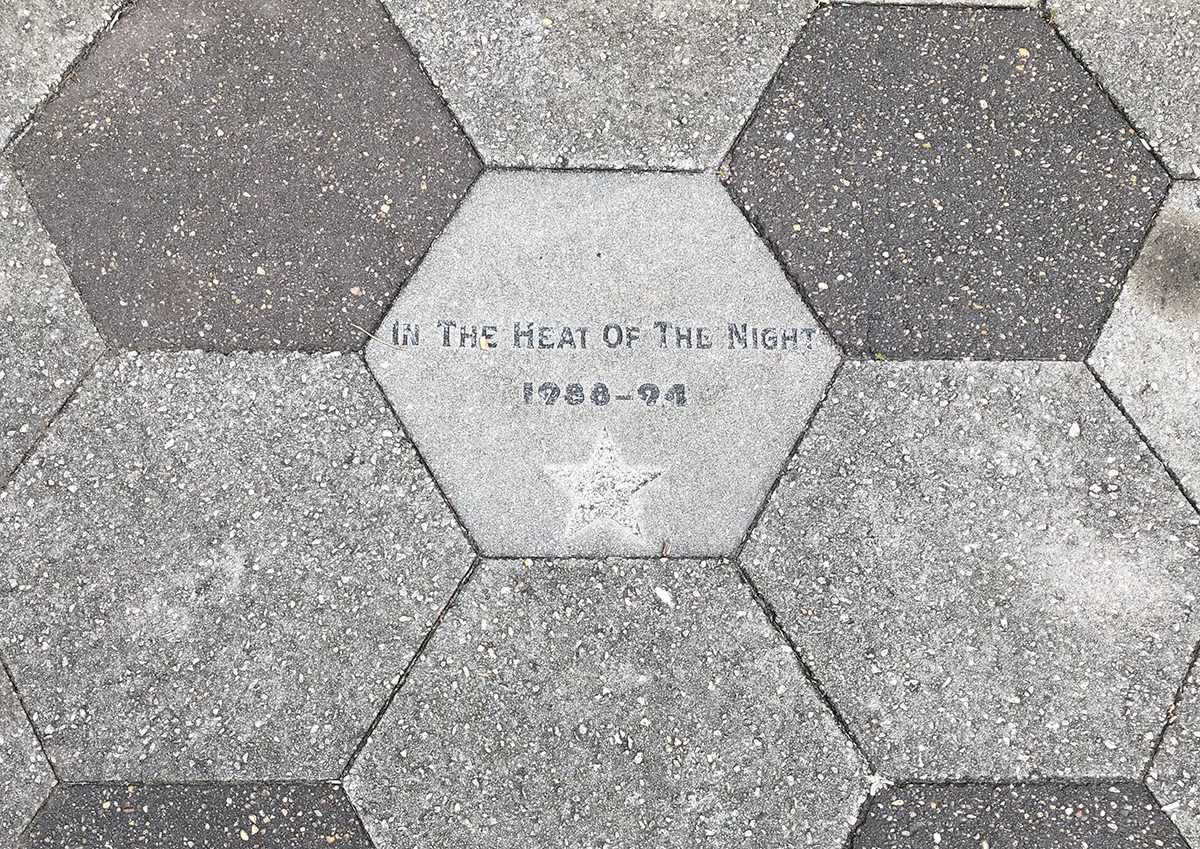 In the 2012 comedy “This Is 40,” a spin-off of “Knocked Up,” the story follows the life of a married couple, Pete and Debbie, played by Paul Rudd and Leslie Mann.  The same house was used for the couple in both films and can be found in the Brentwood neighborhood of Los Angeles, California.  The property is gated, with a long wall running along the front, so visibility is difficult.  From the right angle, however, it can still be seen.

Unfiltered Records, the record label where Pete works, can be found in Venice.  It’s just a couple doors down from the bar in “Bad Santa.” 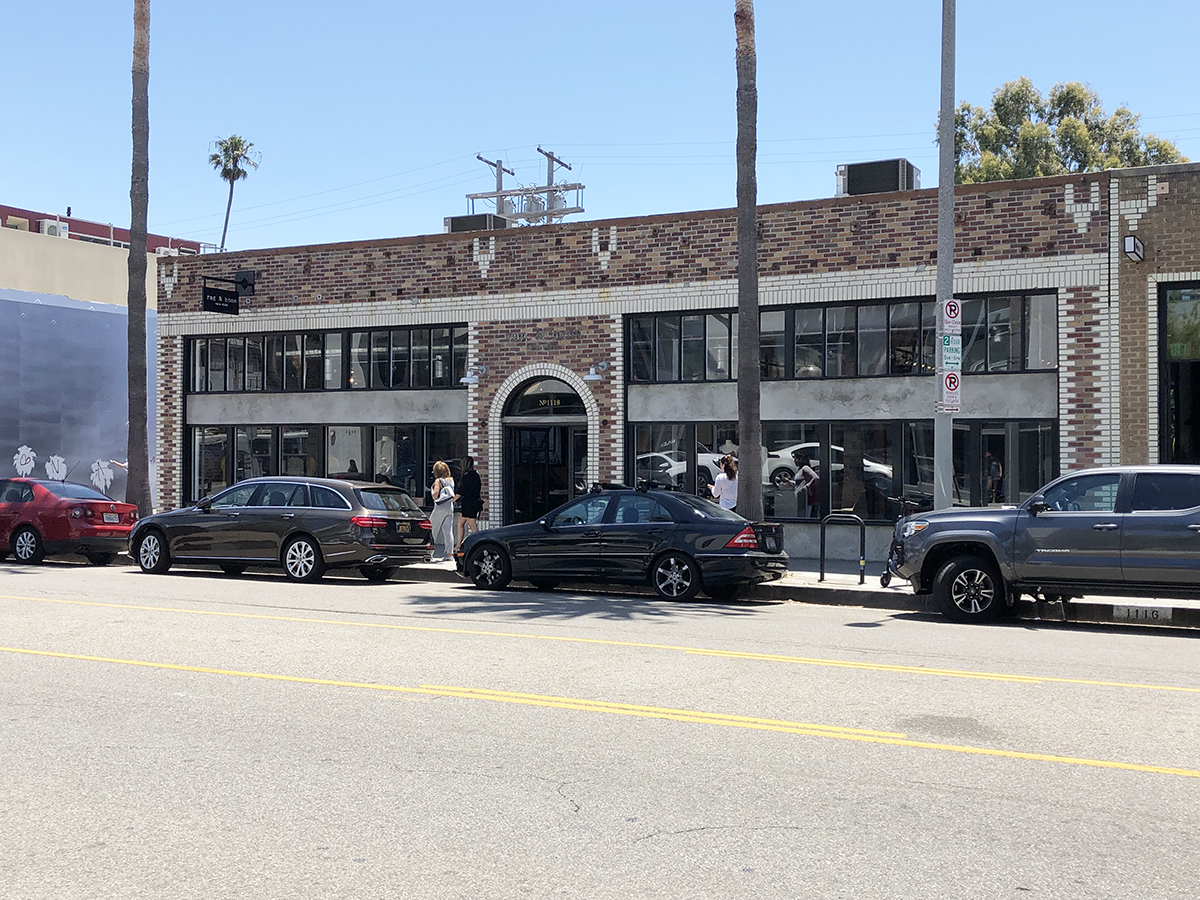 The house from the 2010 horror film “Insidious,” starring Patrick Wilson and Rose Byrne, can be found in midtown Los Angeles. 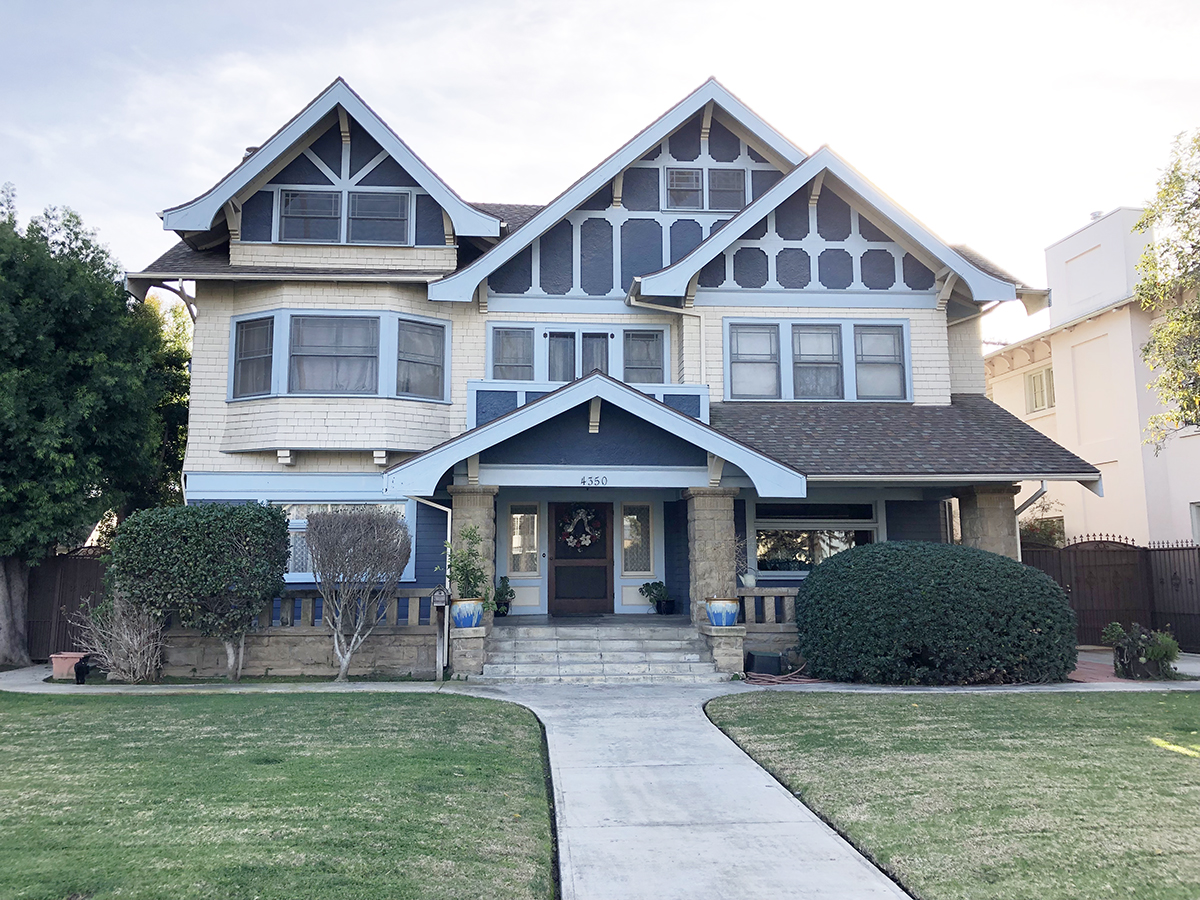 Later in the film, the family moves to this home, also located in midtown L.A.